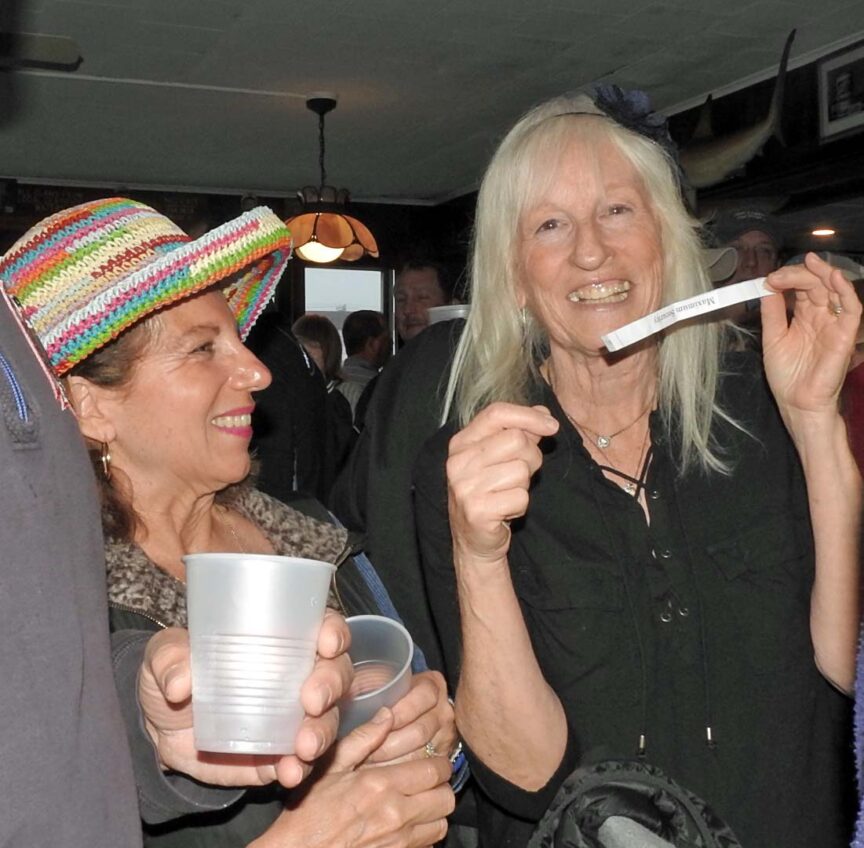 Welcome back! Bye, bye winter. Bye, bye rain (we hope). Looks like it will be a very busy summer with events for everyone.

We are all saddened by the death of Carole Thomas from metastatic cancer. Carole was my neighbor and friend and a valued contributor to both KLAW and the KFD Auxiliary.

We extend congratulations and best wishes to Danielle and George on their marriage, announced by the ribbon around their door. Longtime renters John, Robin, Jen, Joe and Scott are proud new owners of “Way Way Yonder” on Seabay, and have already put in a new ramp, bicycle rack, windows, outdoor shower and dryer shed. They’ll tackle indoor renovations anon.

The contractors are racing the calendar and the weather with home improvements. There are two homes being raised: Terry Corio’s former house on Pine and Burma and the Arthur house on downtown Oak. Looks like Lauren is having some roof work. Best of all, for the community, are the fabulous new solar lights along the dark paths between Pine and Seabay, on both Maple and Burma. (Formerly referred to as “the gates of hell” and path of “Children of the Corn.”) What a difference for night travelers. No more jumping into the phragmites at the sound of a ghostly bell. They were funded by KFD Auxiliary’s Community Day earnings, which were loaned to KCA. Erected by Sam Wood, they work well – even with our recent limited solar fuel.

The year rounders are surely approaching the new season with mixed emotions – crowds, driving restrictions, but again, we will all be enjoying good times. With a number of Kismet seasonal homeowners checking in, there is a swelling chorus of longing for warmer weather and less rain, especially on the weekends. We have already experienced our first crowded downtown with the May 4 Kentucky Derby showing, with beautiful big hats, English fascinators and confused winners and non-winners. The Pig Roast boasted hundreds of presold tickets and crowds pouring off the ferry to feast under the big tent. KFD debuted their seasonal sweat and T-shirts at tables in the space between – the 2019 color is maroon.

The Kismet Historical Society invites entries for competition is open to all. Email your design idea to woodbuilt@aol.com or drop it in Sam’s mailbox outside his office. Deadline is May 24 at noon. The winner will be announced the next day. Our Calendar of Events has already started, taking us through August.

After Derby/Pig Roast weekend, the next event of the season was the Battle of the Bloody Mary with 15 contestants vying for honors at the Fire House on May 18, at 11 a.m., which will be covered in our next edition. KFD will have hosted a CPR class May 22.

Memorial Day weekend events include a second annual KLAW book sale at Seabay and Burma, on Saturday, May 25, at 11 a.m. This year’s event also features a slew of craft materials (yarn, needles, etc.) and a pre-auction display of both a child’s and an adult’s bikes. The Kismet Fire Department will hold an open house, with rides and fire hose demos, on Sunday, May 26, at 11 a.m.

Moving on to June, the Kismet Community Association will meet Sunday, June 2. Homeowner reminder: Dues are due. The 22nd Annual KLAW Flea Market is set for Saturday and Sunday, June 15 and 16, at the Fire House, with auctions and new and slightly used treasures at bargain prices. Doors open at 10 a.m. on both days. The Annual Burger cook-off on the beach off Seabay is scheduled for June 29. Everyone is invited to cook and/or eat. See John B. if you want to enter the competition.

July will kick off with KFDA bingo on Tuesdays, beginning July 2, with separate times for tweens/kids and for adults. Adult movies will start Sunday evenings at 8 p.m., beginning July 7; with the tweens/kids movie times to be announced. The Sandcastle building contest will be back on July 6, at 10 a.m., at the beach off Pine. The July 4 Parade and KFD BBQ will be held July 7. This longstanding event begins with kids in costumes in parent-drawn wagons ending at the Bay, for a patriotic moment, then prizes for great floats. KFD members serve up food, drinks and auction tickets. As usual, KLAW will be auctioning a new bike.

Repeating last year’s event of the season, there is another KFDA Community Day scheduled for July 20. This was a super fun event and not to be missed! This well planned fundraiser offered lots of fun and brought the community together.

Comedy Night is on for Aug. 9. Admission is $40.Kismet’s favorite, the Flower Ladies, will do two encores, one in July and one in August.

There will be more event details in future Kismet Kapers. Sound exhausting? There’s always the beach or a cozy nook on the deck.