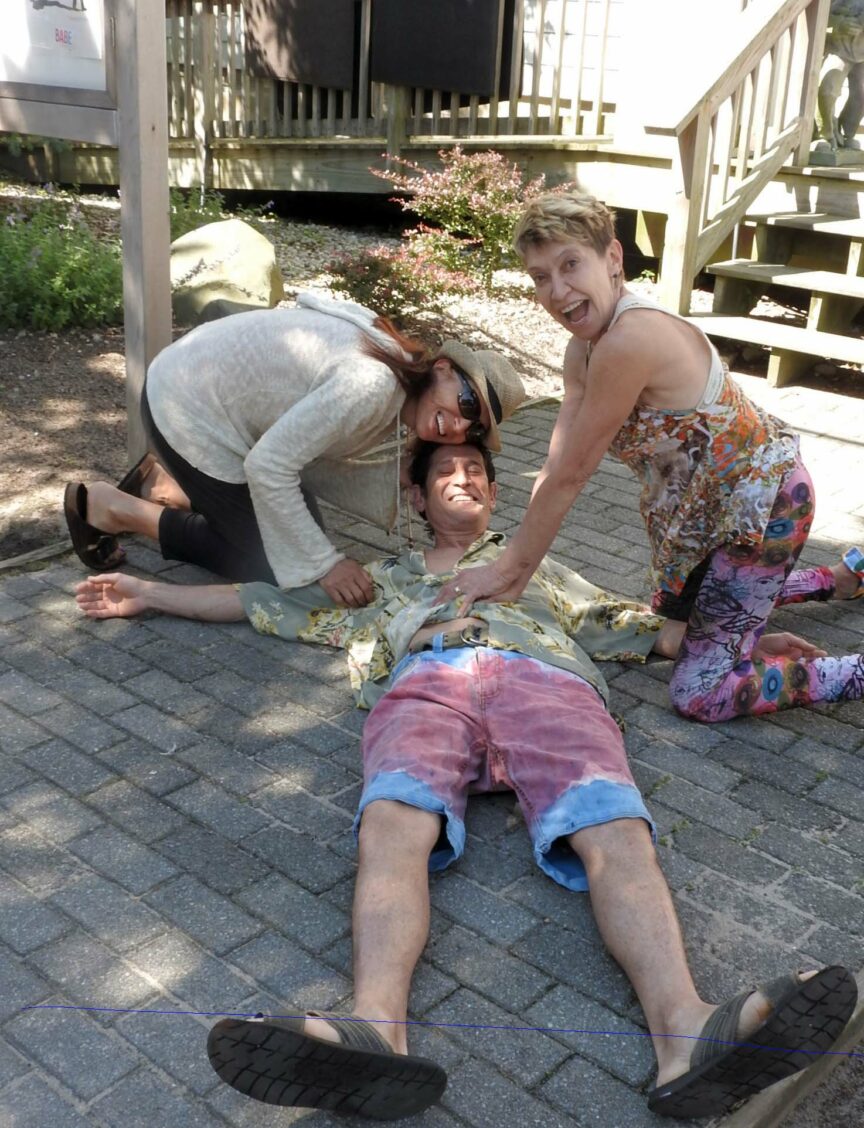 Thanks to help from so many people in our community – donors of gently used goods for sale, merchant donors of gift certificate for auction, donors of services, and volunteer donors of their time and efforts – the Kismet League for Animal Welfare pulled off another fabulous Flea Market and Auction fundraiser this past June 15-16. To list all the donors and “Winners” would be impossible in this space, but: baskets of wine to Margaret Scholler and former Kismetian Bob Jaffee; Christine H. snagged the American Craftsman tool chest donated by Chief Dom. Volunteer Tina Grace won the canvas wagon and visitors Brianna and her family enjoyed a Father’s Day lunch after winning Paul’s gift certificate. Andy was our super go-to-guy, from donating a gift certificate to providing space for anything we had to leave overnight – our table, our garbage, maybe a bicycle. Sam Wood offers his driveway for the book sale and bike raffle. The donated goods were of first-rate quality, including super cookware and an impressive spice rack. John Altieri, who has volunteered his pick up services every year, was puzzled, “Where’s the KLAW garbage?” Of course, we can never sell everything but merchandise in good shape is packed and donated to Bay Shore charities.

Two young local heroes – Kai Sitone and Lydon Cole – have been selling hand-painted shells and lemonade for the last two summers to raise money for the Riverhead Foundation for Marine Research and Preservation. The Foundation has rescued a number of wounded sea creatures from the Fire Island beaches, including the seal found on the Kismet beach last April. The seal, a female pup tagged Basil, had minor injuries. Now, eating whole food, she will be released June 28, in East Hampton. Kai, his mother, Kim, and grandmother, Sharon, visited Riverhead and were rewarded with a backstage tour of Foundation facilities. The boys plan to continue their fundraising efforts and are encouraging our donations. (See Kim’s post on Kismet Homeowners).

The Kismet Fire Department Auxiliary sponsored a very well attended CPR class in the Firehouse equipment bay room, Saturday, June 22. Although Caroline, George and their friend, Anna, struck a humorous pose for my photo, they took the training seriously and later described the instructors as knowledgeable and proficient, and the people attending as concerned and motivated. All attendees earned certification or recertification.

Coming up: The Kismet Fourth of July celebrations will take place Sunday, July 7. There is still time to pick a parade theme for the kids, decorate a wagon and join the parade, kicking off from Burma and Oak, at 11 a.m. on Sunday. Following the parade and a patriotic observance at the downtown flagpole, the Kismet Fire Department will host a fabulous barbecue KFD will be holding great raffles, as will Kismet League for Animal Welfare (two bicycles). Mark your calendars – Saturday July 20 – Kismet Festival by the Bay looks to be THE event of the summer. KFDA sponsors are still seeking vendors. Call Dana at 914-954-2875.

I share two items of interest to Fire Islanders from the NY Times Tuesday Science section. The endangered piping plover population has increased by 93 percent thanks to new plover-habitable sand flats created by Hurricane Sandy and its aftermath. If current trends continue, “they may soon reach their recovery goal.” Good news for the birds, good news for year-round residents whose beach access has been severely restricted to protect nests. Many of us sense a general feeling of well being at Fire Island with its peace and tranquility. I have even seen and experienced healing of injuries and illnesses. Medical researchers have now confirmed what we have long suspected: spending significant time outdoors in natural settings can improve our physical and mental health.

The unique peace and tranquility of Fire Island is now being threatened by those who should be caring for it. Years ago, we traded Robert Moses’ threatened road for designation as a federally protected National Seashore overseen by the National Park Service. Three years ago the Park Service adopted a Deer Management Plan that offered only killing as a solution to a perceived problem of overpopulation of deer. Once the plan was announced in 2014, there was strong opposition from residents and humane organizations. Fire Island has had the benefit of 17 years of successful use of Immunocontraception, first implemented by scientists and the Humane Society with resident volunteers in 1993, and later adopted by the Park Service, which abruptly canceled it in the fall of 2010. Now the Service has begun “culling” deer at Robert Moses State Park and the William Floyd estate. One lawsuit by Friends of Animals was dismissed. Another, co-sponsored by two prestigious animal organizations, The Animal Welfare Institute and the Wildlife Preserves Inc. is still active. That suit is progressing, with a pre-trial conference scheduled for mid-July. A recent strong op-ed, appearing in the June 13 edition of Islip Bulletin sounds the alarm. The Fire Island Wildlife Foundation plans to implement several actions, supported by the many Island animal organizations, including the posting of visually striking lawn poster signs, a petition drive soon to appear on Change.org and Care2.com and an upcoming rally. This is the time for residents to show their support for these organizations and the suit that aims to stop the killing.