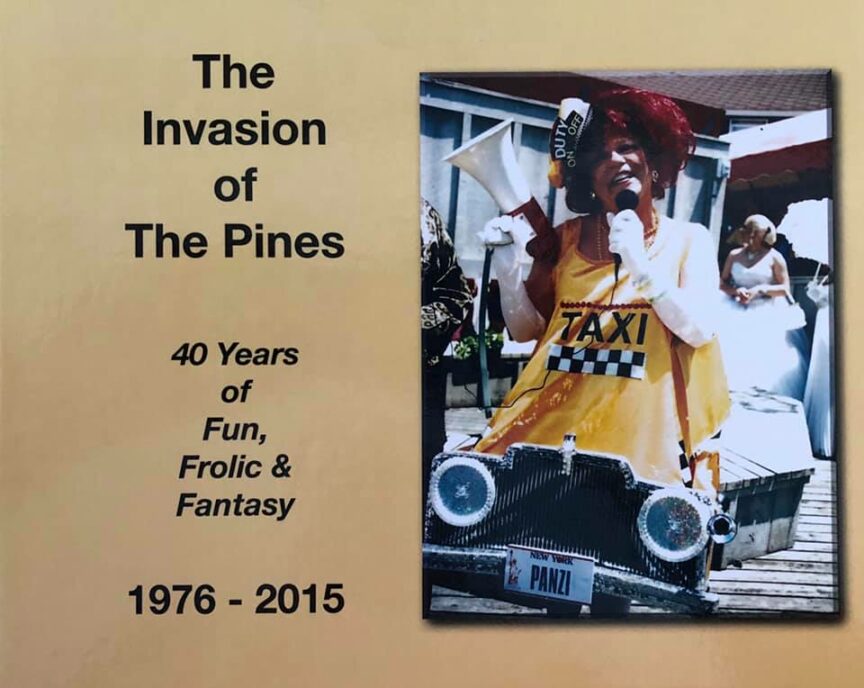 Fire Islanders have contributed significantly to the dialogue of LGBTQ literature. This is an achievement worthy of recognition. Many are fixtures on the bookshelves of any Fire Island beach house, not only because they are homegrown authors, but because they are also fine works. For your summer reading pleasure here are a variety of books that include the island’s gay history, photography, a hurricane, and for the intelligentsia out there, a book on literary criticism.

“Cherry Grove, Fire Island: Sixty Years in America’s First Gay & Lesbian Town” – Esther Newton, Duke University Press
Over 20 years ago Cherry Grove resident and social anthropologist Esther Newton penned a groundbreaking work, which was in many ways the first of its kind. In 2015 Duke University recognized this achievement and issued a reprinted edition. Here, you’ll learn about the little strip of land that became America’s first gay community, the inside info on the bars and discos – some Mafia-owned – and the goings on in the bushes. Newton sets the more isolated Grove against the bigger picture of gay life in 20th century America, celebrating this jewel of a community while honestly exploring its complicated dynamics.

“Mascara, Mirth & Mayhem: Independence Day on Fire Island” – Photography by Susan Kravitz, KMW Studios
Says Kravitz of her collection: “My photographs are … ultimately about human rights and freedom of expression as seen through the lens of the Invasion.” Kravitz, dean for arts and humanities at Nassau Community College, has been documenting the Invasion for decades, celebrating the spirit of gay/lesbian life on the island, most notably in the communities of Cherry Grove and The Pines. The merrymaking and carrying on embraces a community of caring and understanding that goes beyond group, hype, or type. Her book has become a classic in its unique capture of a piece of LGBTQ history during the time of AIDS and beyond on Fire Island. More information is available at www.susankravitz.com.

“The World Broke in Two: A Literary Chronicle of 1922” – Bill Goldstein, Henry Holt & Company
Folks who have never read a book of literary analysis should not be put off by thinking “The World Broke in Two” is hard-to-digest theory. In the hands of Bill Goldstein, recipient of numerous writing fellowships, the book is a fascinating peek into the personal lives of great 20th century writers who changed the way we look at and read literature. Among them is Virginia Woolf, James Joyce, and E.M. Forster (“A Passage to India”). A homosexual and virgin till he was 37, he never enjoyed a relationship that was at the same time emotionally and physically satisfying, all the while grappling to “invent the language of the future.”

“Dark Wind: A True Account of Hurricane Gloria’s Assault of Fire Island” – John Jiler, St. Martin’s Press
It’s Sept. 25, 1985, and the worst storm in half a century is headed towards Fire Island’s narrow tract of land. The East Coast is evacuated for hundreds of miles north and south, but on the barrier reef, 10 die-hard residents refuse to leave. This real life event is where Seaview’s own John Jiler launches his sweeping, epic Fire Island story. Using lively prose and in-depth interviews, he paints a vivid picture of those who survived. Since its 1993 publication, Jiler has emerged to become a notable playwright, with a diverse body of work that includes one-man shows, musicals, and non-fiction. While the Seaview resident is not an LGBTQ author per se, “Dark Wind” remains a classic as he approached difficult subjects early on including AIDS and homophobia with great sensitivity, all seen through the spectrum of a storm.

“Fire Island Modernist” – Christopher Bascom Rawlins, Metropolis Books/Gordon de Vries Studio
Himself an architect and Fire Island Pines resident, Christopher Bascom Rawlins has turned his hand to give us the first-ever account of the late Horace Gifford, whose series of stunning Fire Island beach houses transformed both its terrain and it’s culture. Architecture aside, Rawlins is not only intent on T-squares and transoms, but serves up a cultural history of New York’s gay community, showing how Gillford’s designs were deeply connected to the newfound freedoms he and his clients enjoyed out on the beach, as the ‘60s became The Sixties.

“Fire Island Pines: Polaroids 1975-1983” – Tom Bianchi, Dimanai
Fresh out of law school in 1970, Tom Bianchi was invited to spend a weekend at Fire Island Pines, where he encountered a community of gay men. Using an SX-70 Polaroid camera, he documented his friends’ lives in the Pines. Muscular, chiseled and adoring, reminiscent of Greek sculpture, his photos pay homage to the male form. The images are accompanied by his moving memoir of the era and records the birth and development of a sex-and sunsoaked new culture. Bianchi made headlines in recent months for being banned from Instagram last February, sparking heated debate over queer social media censorship. His account has since been restored.

“Celebrating the Heart of Cherry Grove: The Community House”

“The Invasion of the Pines: 40 Years of Fun, Frolic & Fantasy 1976-2015”- Sue Harrison/Lorraine Michels, Privately Published
For lovers of LGBTQ history, local history, and Cherry Grove lovers everywhere. Self-published, both titles are commemorative books – the first celebrating when Cherry Grove Community House Theatre was listed on the National Register of Historic places in 2013, the latter celebrating the 40th anniversary of the Invasion of Fire Island Pines, which just so happens to be the same year that the landmark U.S. Supreme Court decision Obergefell v. Hodges legalized same sex marriage across the nation. The two tomes are full of the lush photography that Michels is known for,
and presently only available in the general store in the Grove known as Goodies. Sales proceeds benefit the Arts Project of Cherry Grove. For those who can’t get to Goodies, email photocgfd@icloud.com to make purchase arrangements. All other titles on this list are available through major book retailers; those out of print are often available through second-hand outlets.

Teaser Alert: Review of Gilbert Baker’s “Rainbow Warrior, My Life in Color,” on newsstands Aug. 16, 2019 – and what a life he had!