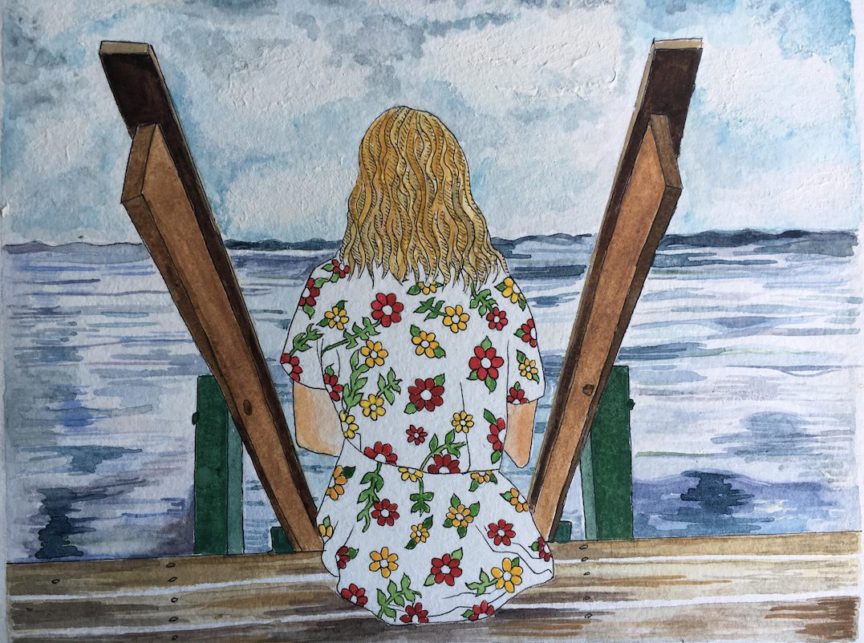 This day is different. It is unlike the thousands of previous ones in which I sat on the dock waiting to board ‘the’ last boat back to the mainland. Today, I am lodged on a bench beneath a weatherworn overhang sheltered from the sun’s afternoon rays where I await a ferry that will transport me from what was to what will be. This is a voyage that no one can, or will, take with me, and although a bay of water and a sea of people surround me, I am alone on this, ‘my’ last boat off Fire Island.

I arrived in Ocean Beach a decade and a half ago as a guest in what was my husband’s dream. I envisioned that we, as a couple, would integrate into this small summer – and even smaller yearround – community and live out our days here. Fate had other plans, however. Our lives together on this narrow strip of land were shortlived, for in 2006 the fantasy was painfully shattered with the dissolution of our three-decade long marriage.

On Halloween of that year, as a mound of legal documents traversed a long conference table in a musty and dimly lit office, I signed papers that re-wrote my previously charted course and laid the foundation for my new life’s journey. Although terrified to move forward in such an intrepid manner, I was more desperate to preserve the only thing familiar to me, and so I jumped in. With a stroke of the pen, I relinquished my share of our joint financial interests in exchange for a deed and a mortgage. On that day, I became the sole owner of “Cherry Cottage.”

After years of living in comfort and security, I returned to Fire Island as a single woman where I quickly found myself financially unsteady and entirely responsible for myself, my decisions, and my future. I was ill prepared for the unfamiliar status I now carried and despite my, at times, near-paralyzing fear, I took comfort in the fact that I had a home at the beach and a community of people I believed would buoy me into my new role there. In contrast to the passel of apprehensions that haunted me, I felt a profound need to prove myself both capable and worthy of owning this traditional Fire Island cottage that I would forever fondly refer to as ‘The Castle.’

My new reality required that I make considerable changes in both the personal and career aspects of my life, and it was on this island and within the walls of the grand old dame that I would forge my emerging identity and pen my unwritten future. Doing so was not without questioning my strength to juggle the myriad of obligations that existed. This was eclipsed, however, each time I stepped off the boat and was met with an invisible reassuring embrace. And, after the brief walk to my home, I was always reminded, as I crossed The Castle’s threshold, of the reason why I pushed myself as hard as I did.

Throughout the years the number of guests I shared this sanctuary with waxed and waned. I was fiercely selective about those whom I invited to The Castle because she unlocked the portal to my soul and reflected who I was. She knew my fears, sorrows, and secrets, as well as my accomplishments and joys. We shared unseen private moments that are immortally buried within her walls.

On that magical slip of land that called to me so many years earlier, I learned perseverance, courage, humility, and conviction. It was where I gained self-confidence, self-worth, and self-esteem. And while I found refuge from work, school, burdensome problems, and broken promises under the moonlight on the bay, the ocean graced me with its ethereal healing energy, of which I was often in critical need.

In my time as mistress of “Cherry Cottage,” I cultivated a life that, although regarded by some as unorthodox, provided me with a collection of stories that became the basis of what was to come. I had accumulated a fair amount of memories that made both my head and heart smile, but I also amassed remembrances of the far too many times that same heart hurt until it felt ready to splinter. Slowly, and without realization, I began creating a life entirely separate from that which I lived at The Castle and my presence on the island waned into nonexistence.

Several years later I was oddly made aware that everything has a season and that each of those seasons is perfect in their own ways and for their own times. It was on this island that I had acquired the ability to hold on through the storms, even when I thought I could not. It is also where I would learn to let go in much the same way.

On a breezy Sunday morning while walking on the beach, I received a soundless message carried on the wind that told me the season for me to move on had arrived. At that moment I recognized I no longer required the reassuring welcomes or comfort I once did, nor did I have the need to demonstrate my capabilities. This barrier island had forever changed me and left behind only remnants of the person I once was. Although still grand and filled with charm from its base to its rafters, The Castle – once my beloved home – had become yet another house at the beach. It was time that I let her go, along with the ghosts of a time, place, and person that no longer existed either within or outside of me.

So that brings me to this day in which I sit alone waiting for the ferry that will take me, for the last time, across the Great South Bay back to the mainland. I reminisce about the darkness of the nights and the skies emblazoned with countless stars, the moonlit walks, bike rides, and the sound of the ocean lulling me to sleep. I contemplate the bittersweetness of this moment and recall the ill-defined and frightened person who crossed this bay in what seems to have been a lifetime ago. The confident, accomplished, and independent woman I now am will leave this island knowing that it is time to begin a new phase and embark upon yet another journey. On my next adventure I will take with me the countless invaluable lessons this island and The Castle have taught me.

Before leaving her this final time, I walked through the rooms, touched the door frames with both hands, bowed my head, gave her thanks, and bade her peace. For the last time, I ritualistically locked the front door, bolted the porch entry, and turned the key on the back slider.

As I walked down the side boardwalk one more time, I opened the green gate with a heart carved into its center, stood silently before closing it behind me, and then continued on my way. I turned right at the end of my walk and headed toward the water. I did not look back, and I did not cry. It was a solemn moment that needed nothing more than that sacred and unspoken farewell. Although the plaque on the house reads “Cherry Cottage – Circa 1927,” to me she will always be The Castle and will forever remain timeless.