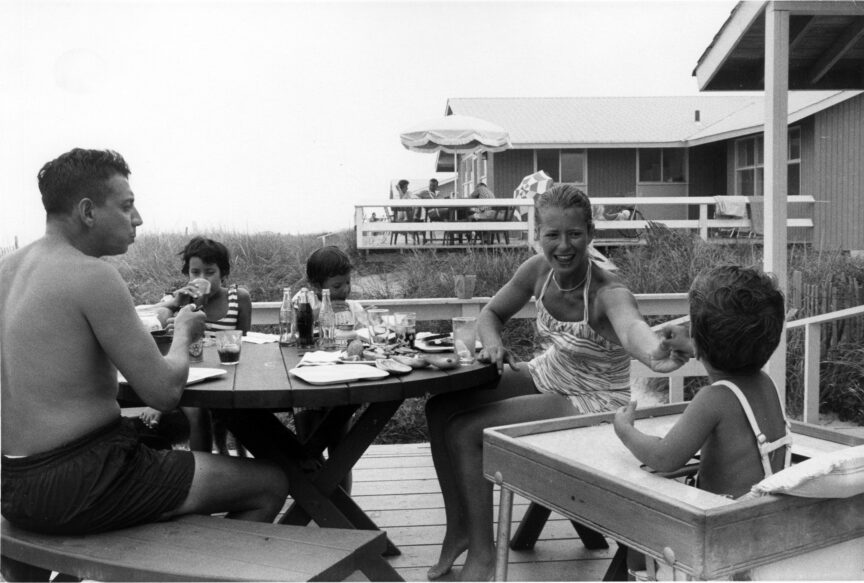 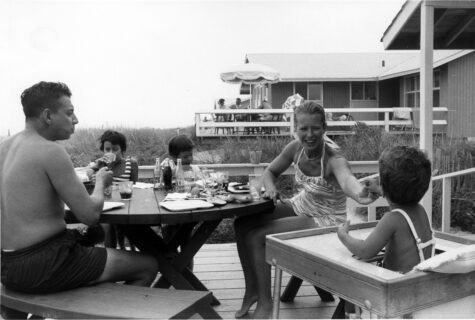 The Barbash family featured in a Dunewood community promotional photo from the 1960s, with Lillian in the center.

By Rebecca Hoey ~ LILLIAN BARBASH PEACEFULLY passed away in her sleep at age 92 on July 4, 2020, in her Brightwaters home, after battling congestive heart failure. She will be remembered for touching lives as she made larger than life things happen in the world of the arts.

Born Lillian Like in Bronx, New York, she married her high school sweetheart, Maurice Barbash, in 1947. They had three children together: Cathy, Susan and Shepard. Grandchildren would follow: Emma, Ani, Jonah, Lydia, Samuel and Eddie; and great-grandchildren, Max and Eliza.

Being a hands-on mom came naturally to Barbash. “She pretty much raised her children first, before dedicating herself to the arts,” said her daughter Susan. While her children were in school Barbash became president of the PTA, and became increasingly involved with the community.

Much of the family’s time was spent on Fire Island. “The first time my parents came out to Fire Island as a young couple was after getting the idea from seeing the Wolcott Gibbs play, ‘Season in the Sun.’ The first time they visited, they stayed at Houser’s Hotel.”

As the Barbash’s love for each other grew, so did their love for Fire Island. Shortly after their first daughter, Cathy, was born, they rented their first home on Ocean Beach.

Then in 1958, Maurice, along with business partner Irwin Chess, developed the Dunewood Community, and it became the place the family would spend their summers together.

While Maurice and Lillian’s brother, Irving Like, are remembered for being part of the driving force behind the Citizen’s Committee for a Fire Island National Seashore (they lobbied Congress relentlessly to establish this protection), Lillian forged accomplishments in her own right.

She founded the Islip Arts Council, which she led for 31 years; and with a meager budget and no paycheck, she brought the New York Philharmonic free open-air park concerts to the South Shore of Long Island on an annual basis.

When she handed over the baton of running the Arts Council to current Director Lynda Moran, she maintained ties to the organization and a friendship with Lynda. “I led in one way you’ll lead in another,” Moran reminisced. “She always made it crystal clear to me that she was in my corner. She was an incredibly gentle and kind woman. It always amazed me how this one person could make such a huge difference. She left a legacy filled with class and love.”

Lillian also organized massive school trips for the entire junior and senior classes of Bay Shore High School to see Broadway shows, including “Having Our Say” in 1995, and then “Hamilton” in 2016. Ultimately the Bay Shore Schools Arts Education Fund was created at her behest.

In honor of Lillian, her grandson, Eddie, an accomplished professional jazz saxophonist, live- streamed Islip Arts Council’s website performance of Bach’s “A Musical Offering,” with pianist Evan Shinners, on July 7, from the back deck of Lillian’s Dunewood home. The podcast version can be viewed and enjoyed for a limited time at www. twitch.tv/wtf_bach.