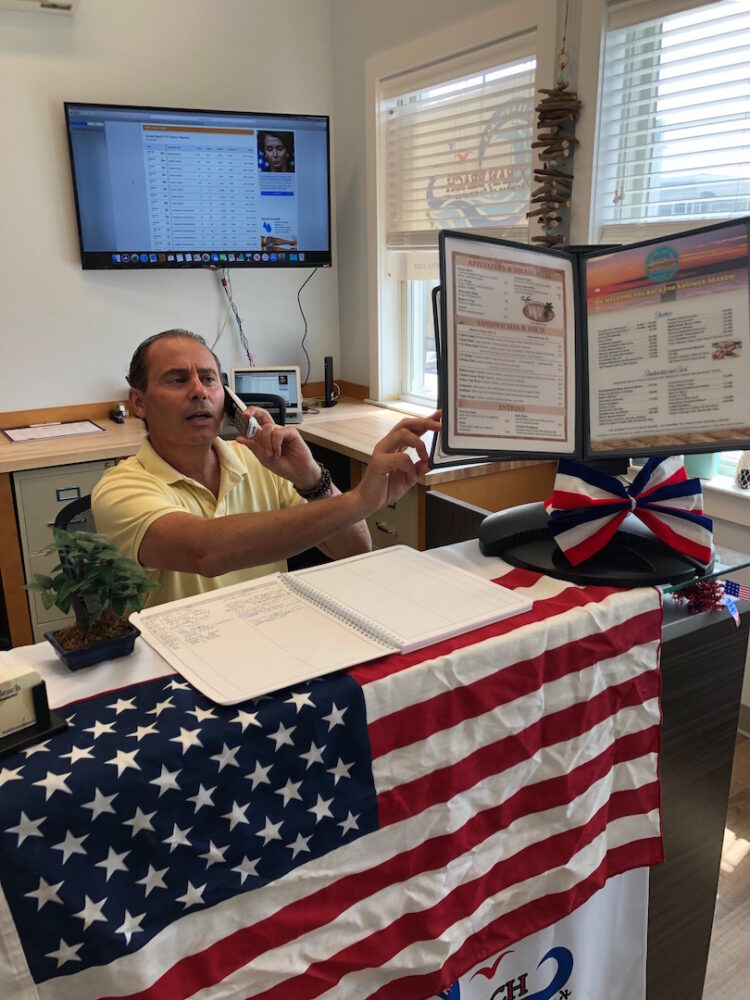 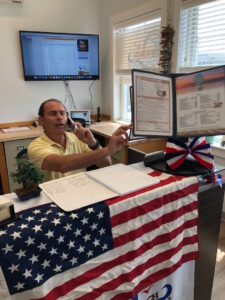 Chris Mercogliano mans the phone at the new Chamber of Commerce Welcome Center.

It was 2 a.m. on Sunday, July 7, when Carol arrived on Long Island to file a missing-person report after a six-hour drive from Virginia. Her 19-yearold daughter’s suitcase had been turned over to the police after being found on the side of a walk here in Ocean Beach, and she had been missing for three days. A culinary student, Carol’s daughter had joined classmates on the beach 11 days prior to her disappearance to spend the summer working at a restaurant in town.

After taking Sunday’s 7 a.m. ferry, Carol spoke to police and stopped into every open business in an effort to find out where her daughter had been the night of July 4, and where she had been since. She met Helen Tannehill at Dockside Pizza, who took her number down. She was with Angela and Joe at Rachel’s when Helen called and asked if she could post a message about the situation online. Carol raced back and worked with Helen to spread the word.

By then, Harvey Levine had offered Carol a room at his hotel and printed copies of a flyer to hang in town. Helen lent her a stapler. As she traveled around town, she began to hear passersby talking about her daughter. It was around this time that I returned to my beach blanket and was startled to read that one of my neighbors was missing.

Within hours, Carol’s daughter was found with the help of the members of our community. After hearing through social media that the missing woman may have been wearing a KISS T-shirt, the wife of a Fire Island Ferries captain called her husband to ask if he had seen anyone wearing such a shirt on the night of July 4. He had, and had called police after noticing the woman behaving erratically. Through this lead, Carol’s daughter was found in a Manhattan hospital after being transferred from Southside, where she was initially treated. She is expected to make a full recovery.

“Look for the helpers,” Fred Rogers’ mother told him as a child. “There’s always someone who is trying to help.” Carol took an extra trip back to Fire Island after being reunited with her daughter to return Helen the stapler she had accidentally kept in her purse – and to thank her for helping. She is also thankful to Harvey, and the ferry captains, and the 10,000 helpers who shared her daughter’s missing- person post online. Our community’s compassion reunited a family within hours.

Our community also came together in grand style for the Fourth of July, with 80 festive wagons entered in this year’s children’s parade. The winners of the annual home decorating contest were both on Surf Road: The Middleton family at number 342 won first prize and the Meyer family at 329 won second. The parade crowd sang to former mayor Natalie Rogers in celebration of her soon to be 100th birthday, as she arrived by fire engine. Shortly after, trustees Chris Norris and Matt Blake were sworn in for another term by Mayor Jim Mallott.

The ferry terminal has a new tenant: The Ocean Beach Chamber of Commerce. Organized last spring, the Chamber has opened a welcome center adjacent to the passenger waiting room. The center will be staffed by the Chamber’s more than 50 members from 10 a.m. to 6 p.m. most days, and offers brochures and menus from businesses throughout the community. The Chamber is launching its Ocean Beach Seafood and Music Festival from Aug. 6-8. For more information visit www.visitoceanbeach.com or call 631-583-OBFI.

Residents will start noticing benches reappearing on beach overpasses over the next few months. While no schedule is set for installation on individual walks, the village will be working as time and space allows, with future improvements to northside steps planned on most walks.

A reception was held at the Ocean Beach Historical Society’s gallery the evening of July 13, to open a new exhibit featuring the works of local residents Charlotte Bravin Lee and Hellen Barbara. The exhibition will remain on display through July 31, 2019. See Alia Derriey’s coverage on page 16 of this issue. The Historical Society also invites the public to submit photos of Ocean Beach homes from the first two decades of the 20th century for inclusion in their upcoming exhibit in August. Email obhistorical@ gmail.com for more information, or drop photos at the Community House.

The Seaview community came together with neighbors for a showing of the film “Field of Dreams,” on the bay on July 13, sponsored by the Seaview Community Fund in memory of Howard Solomon. The Community Fund will be hosting game nights, featuring board, card, and parlor games, every Wednesday, at 7 p.m., at Fire Island Synagogue, Beachwold and Midway, and all are welcome.

The Ocean Beach Youth Group is in full swing for the season. Camp Coordinator Patty Brahe would like to thank local artists Kim and Diane for participating in programming for Teenswept, a free program for children between the ages of 12 and 16, on Mondays and Wednesdays, from 7 to 9 p.m. Ping pong, air hockey, and a changing selection of activities are offered. On Thursday, July 25, the Youth Group is planning its first Drama and Dance field trip to the Argyle Theatre in Babylon. Visit www.obyg. org for more information.

A golf cart is available for use by senior citizens to travel between the ferry terminal and their homes; visit the police station to gain access. A driver’s license must be left with the police and will be returned upon return of the cart.

The east tennis court has been made available for additional wagon parking. Residents are asked to use the provided chains for locking wagons. Also note that the village’s next bulk garbage pickup day will be Wednesday, July 24.

Let’s all lend a helping hand until we meet again. Hope to hear from you soon.