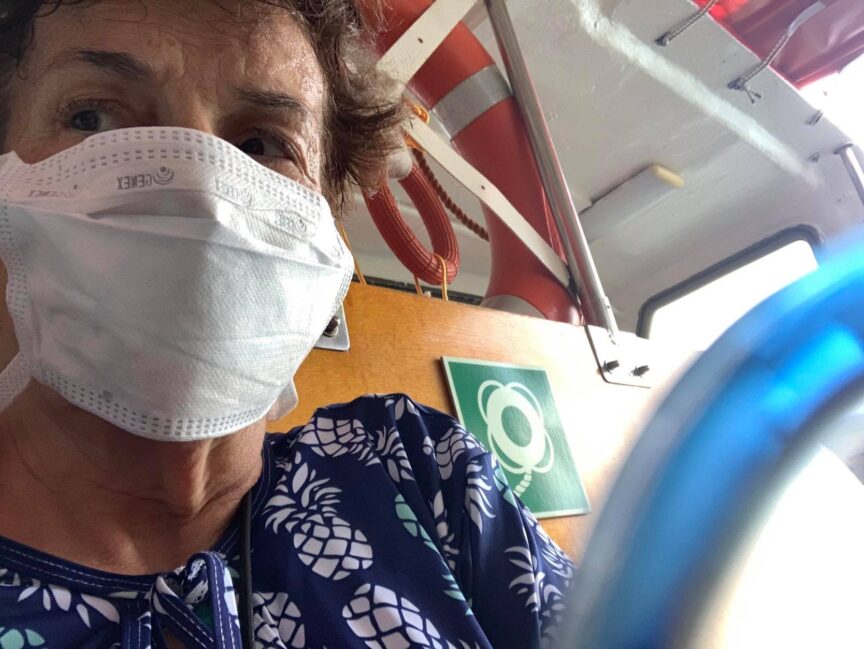 By Mariana Dominguez  ~ Calm Before the Storm: The first seven days went as planned. 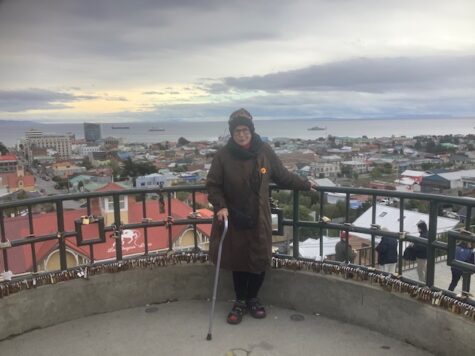 Joan Rashid in Valpariaso, Chile, before the problems began aboard the “MS-Zaandam.”

On March 3, Joan Rashid flew out of New York headed for Buenos Aires. On March 7, she boarded Holland-America’s “MS–Zaandam” for a 31-day South American cruise beginning in Buenos Aires and ending in Fort Lauderdale.

Early in March COVID-19 was a mostly European problem. Rashid expressed concern about the voyage but on calling Holland-America was told she could not get a refund if she canceled. On the day of the ship’s departure from Buenos Aires, New York state declared a state of emergency due to the virus.

Upon embarking, Rashid noted that there was passenger screening but it was dependent on self-disclosure. There were no signs of the now all too familiar temperature checks. Passengers were asked if they had been feeling ill and passports were checked to monitor comings and goings from affected countries.

“About 300 passengers were U.S. citizens but most were from Europe; Germany, France and England,” Rashid said. “Most had not canceled.”

The Voyage Begins: The first port of call was in Uruguay followed by the Falkland Islands. On March 14, the “Zaandam” arrived in Punta Arenas, Chile, whose port was still open. (Chile reported its first COVID-19 case on March 7.)

After leaving Punta Arenas, the “Zaandam” headed to Argentina. During the night however, surrounding countries began to lock down. Argentina was closing its ports and Chile’s ports would be closed by 8 a.m. that morning. The ship needed to get back to Punta Arenas before Chile’s ports closed.

On March 15, “Zaandam’s” Captain Ane Smit got on the ship’s P.A. system to announce that the cruise would be ending in Chile. Passengers would be disembarking in Punta Arenas and needed to fly home.

This would not end up being the case.

No Destination: Chile had already closed its ports. Holland-America and Chile tried to negotiate a deal but on March 16 negotiations broke down. The “Zaandam” was not allowed to 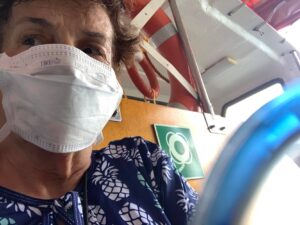 dock and went back out to sea. From her cabin, Rashid monitored news channels for information about the virus. The panic in the states. The consequent lockdowns. The fear.

“Sometimes we were able to get BBC News on the TV, which gave more information related to us,” Rashid said. For a large part though the ship was in its own bubble, floating at sea.

According to the Cruise Lines International Association (CLIA) Global Passenger Report, the average age of cruise passengers is 46.7 years. Cruises tend to appeal to a slightly older and retired group. They allow passengers to make new friends and join activities in a relaxed environment. However, because of the proximity to others and constant interaction between both passengers and crew, a virus can spread quickly and easily on a ship.

On the “Zaandam” things were precariously balancing on normal. The ship had no clear destination and extra precautions were being taken to ensure cleanliness, such as crew doling out portions at the buffets instead of passengers helping themselves and hand sanitizer being easily accessible. After refueling for two days in Santiago, Chile, the “Zaandam” still had no destination.

The ship’s final sense of normalcy was lost when passengers were told to return to their cabins because some passengers and crew were showing symptoms of COVID-19. The crew was delivering food three times a day, and linens were put in a bag outside cabins and returned clean. Only once over thaat 13-day period were passengers permitted on deck in small groups for a brief stint. For Rashid, this meant being confined in her small cabin with no window or fresh air.

In the middle of the night of March 25, a boat carrying supplies met the “Zaandam” to replenish food and medical equipment. Passengers were not told of the replenishment ahead of time as to not cause mass confusion.

On March 27, Captain Smit announced what most passengers had already feared: COVID-19 was on the “Zaandam.” 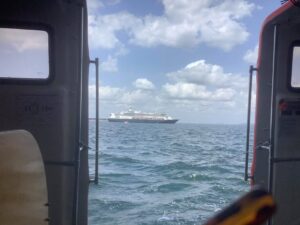 A spied view of the “Rotterdam” coming to assist.

The Journey Home : On March 27, the “Rotterdam,” a fellow Holland-America ship, was dispatched to assist the “Zaandam.” Upon its arrival the plan was for the “Rotterdam” to take passengers determined to be healthy aboard.

No passengers with COVID-19 symptoms or those who had contact with individuals testing positive were allowed on the “Rotterdam.” Rashid feared maybe she would not pass the test. What if her temperature read high, would she be forced to stay behind? However she was grouped with fellow passengers deemed healthy, who were then taken a few at a time in small boats from one ship to another.

Side by side, both ships traveled together in the Pacific Ocean, still with no port to welcome them. The next day Panama allowed both the “Rotterdam” and the “Zaandam” to pass through the canal. Passengers were instructed to turn off their cabin lights and close any blinds. The ships would have to pass through like ghosts.

Once they were through to the Caribbean, the ships had a new obstacle, where were they going to dock in the States? The most obvious option was Florida, but Gov. Ron DeSantis did not initially wish the Sunshine State to receive sick passengers. However Florida ultimately did agree to let the ships dock, and the slow process of disembarking began. It took almost two weeks to get all passengers off both ships. After disembarking on April 4, it took Rashid one shuttle and two flights to return to New York.

Epilogue: The only refund Carnival Cruises, Holland-America’s parent company, gave Rashid was about $3,000. She also received a future cruise bonus worth $25,000. That is, if she decides to cruise again. If she decides to use the promotion she would still need to pay for beverages and any shore excursions she wished to do so.

In total, four individuals died aboard the “Zaandam” with three testing positive with the CDC for COVID-19. Thirty guests and 117 crew members had “influenza-like symptoms.” In mid-May Holland America Line President Orlando Ashford announced he would be resigning at the end of the month.

Rashid returned to New York City during some of its darkest days as the epicenter of this pandemic. It would take time to decompress after returning home, but she was back in her own space. She used the quiet time to process the ordeal while also catching up on daily tasks such as going through her mail. Her son in Texas invited her to stay with him, but she felt it best to isolate away from him and her young grandchild. Shortly before Memorial Day Weekend, she boarded another large watercraft – this time a ferry for her journey back to Fire Island, and her home in Ocean Beach.

This article was updated for correction on July 17, 2020.