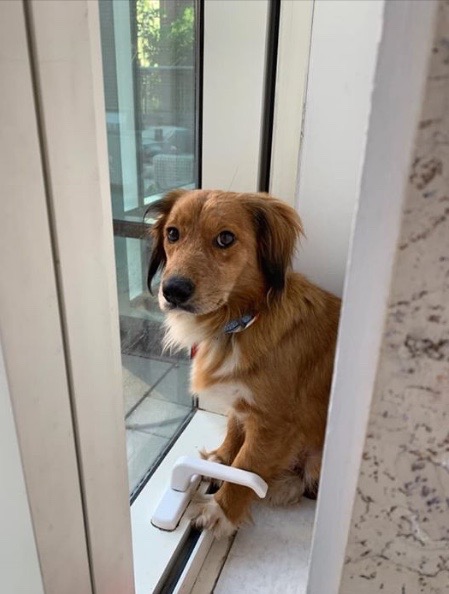 A lost female, white, golden dachshund hound mix named Mama Eliza was lost and found this past week, following Memorial Day Weekend. She was safely captured along the Robert Moses Causeway after her four and a half mile weekend getaway along Fire Island’s shore, beginning along Spruce and South Walk in Dunewood.

Twenty-three-pound Eliza went missing on May 28, and was found three days later on May 31, without her harness and blue leash she had before her dash along Fire Island, according to BDRR.

According to their website, BDRR is run by Nicole Asher, who attempts to relieve the stress from frantic families who suffer from losing their dogs by tracking them down using proven methods and techniques to locate lost and abandoned pets.

“Eliza is actually a Second Change Rescue NYC Dog, who I was fostering until she was adopted by her family in New Jersey,” Susan Thomson of Dunewood, said. “I took her out to my home in Dunewood for the holiday weekend.”

The Rescue agency gave BDRR a call when fearful Eliza bolted from Dunewood. Asher “headed out immediately” to bring Eliza to safety.

“BDRR caught her and they were amazing,” Thomson said. “The way these people volunteer their time … and the patience that they must have to do that. She [BDRR] came back twice to catch her, and it was pretty amazing.”

Their post also details Eliza’s trek, crossing over to the bayside of the Great South Bay and surviving the three harsh rainstorms that hit the area that week. The post reports that she was seen weaving her way in and out of cars on the Robert Moses Causeway as well as the two bridges.

The Coast Guard granted BDRR permission to the barracks and other restricted areas in their quest to reunite Eliza with her family, according to their Facebook post.

BDRR has proven to be an effective way to reunite pets with their owners and has been featured on NBC, ABC and in the New York Times, according to their website.

BDRR’s May 31 post at 12:58 a.m. stated, Eliza was checked into the animal hospital with a 105 fever covered from ears to tail with ticks and fleas from her quest.

The same article ran with the headline “Where, Oh Where, Has my Little Dog Gone? Refresh Your Feeds,” and mentions that thousands of lost and found pet Facebook groups have sprouted from the ground up all over the country in recent years, collecting likes and shares from surrounding communities with their eyes out.

Asher also was quoted in the 2017 article and mentions that often rescue dogs on the run will go into what she calls “survival mode,” and that while Facebook groups that post about pet sightings are helpful, they may encourage people to chase dogs into danger.

In her Facebook post to find Eliza, Asher mentions that “it is so important never to chase a fearful dog, it only pushes them out of an area and into harm’s way, thankfully, this was a happy ending.”

“Every year-rounder from Kismet to Dunewood was incredible in helping me,” Thomson said. “I am so thankful for everybody’s help … it was completely amazing.”