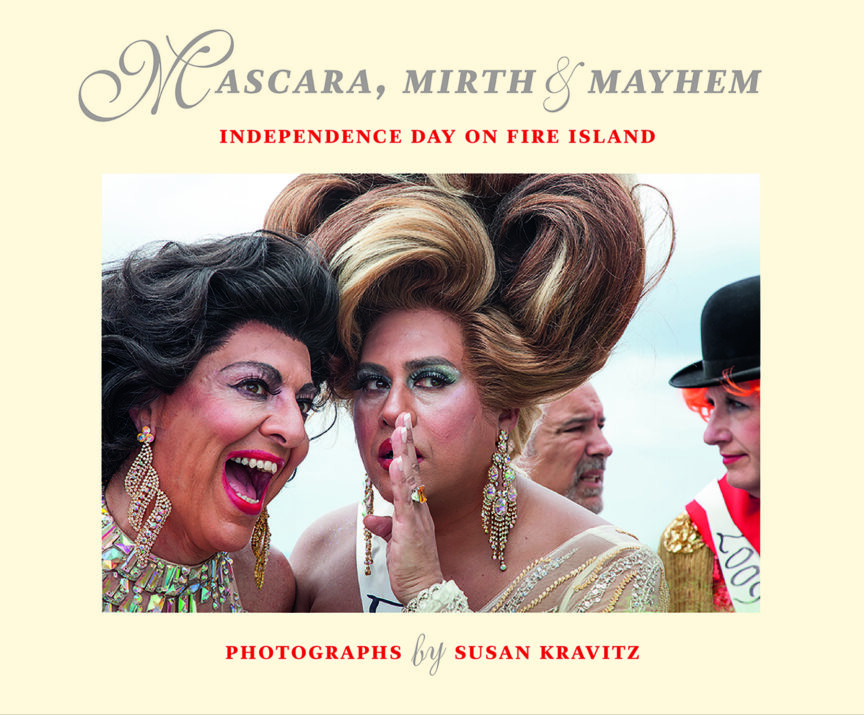 (Article originally published in Fire Island News September 2, 2016) When Editor Shoshanna McCollum asked me to review a book on the invasion of the Pines in Fire Island, I thought deer, ticks and Lyme disease. Not a very upbeat topic to wind down this season’s reviews. What a surprise I was in for!

Kravitz, Dean for Arts and Humanities at Nassau Community College, has been documenting the invasion for decades, an event that has nothing to do with damage done by four legged or flying creatures, and everything to do with the celebration and spirit of gay/lesbian life on Fire Island. Most notably those residing in the communities of Cherry Grove and The Pines.

Back in the spring of 1976, drag-queen Terri Warren and some of her like-minded lovelies went to have a bite to eat at a Pines’ restaurant. They were regulars there, but this was a first for dressing up, which Terri had a yen to do. The more conservative management refused to serve them, a slight that was not to be ignored.

So with the nation’s bicentennial at its height, history was being made on Fire Island in gowns and pantyhose that Independence Day. Led by Thom Hansen aka Panzi –the indisputable “heart and soul” of the Invasion who has lead the flotilla every year, they water taxied over to the Pines, cheered by a gaggle of spectators waiting at the dock. A true Independence Day when you think about it, given that 200 years before, America celebrated its first Independence Day as a sovereign nation.

The LGBTQ community has been ratifying their raid for 40 years since, at the annual event known as the Invasion of the Pines, making merry and rejoicing, embracing not only gays, but a community of caring and understanding that goes beyond group, hype, or type.

Says Kravitz of her collection: “My photographs are as much about the times in which they were taken as they are about the people who populate them. Ultimately, they are about human rights and freedom of expression as seen through the lens of the Invasion.”

You want bouffant? You want bling? You want boobs, jockstraps and hairy legs in heels? What say a pink Chanel suit and pillbox hat ala Jackie K? You ferried over to the right dock. Let’s par-tay! Keep in mind that it’s not all fishnet stockings and unshaved armpits in Kravitz’s more than 80 images in both full color and black and white. Playful and exuberant, hilarious and high-camp yes, yet Kravits’s shutter is always on the lookout for the unexpected, capturing those caught unaware, sad and wary in their leathers and Lycra. Her gimlet eye gets them all.

But to view the book as merely a compilation of photos on a particular theme, however telling and affecting those images might be, is to see the monograph in half-light. There’s story here, and a compelling one, told from the point of view of the folks who were there, are there, fleshing out –pun unintended – the backstory, giving witness to the years following the Stonewall revolution, the horror of the AIDS epidemic, the lives lost, the freedoms gained, the text and personal testimony adding to and enhancing the bigger picture.

From Thom—Panzi: “The Invasion remains a celebration of who we are and a day of respect for each other.”

Hal—Judge Mental: “It is the best party with the most fun… But it also takes me back to… memories and love for the friends that are no longer here to celebrate with us.”

Jim—Electra, recalling the 80’s: “It was a time before cell phones…and all that ‘self, self, self, self mass media going on… we actually talked and laughed together without… texting… that’s something we’ll never get back.”

Michael—Coco Love: “What drag has taught me is to just put yourself in another pair of shoes and see what happens.”

Richard—Bella: “When you are gay, people look at you funny. [At] the Invasion no one looks down on you because you are dressed. Everyone is dressed. Straight people too…”

Lyn: “Everyone wants to be part of it, but I don’t think they know why it began…  continuing generations… should really be reminded of how this started.”

Diana: “The drag scene on Fire Island was just an adult summer camp [80’s] a place to play out loud and outside with your inner child.”

Ray: “It was like Mardi Gras… It was a wake-up call, not just for the Pines for everybody else who allowed themselves to be second-class citizens.”

And, in the words of Steven Mays, “queer activist,” writer, lecturer and career manager:  “…try to put a drag queen down and see what you get: a boatload of trouble. Several boatloads of trouble. Actually four decades of trouble…”