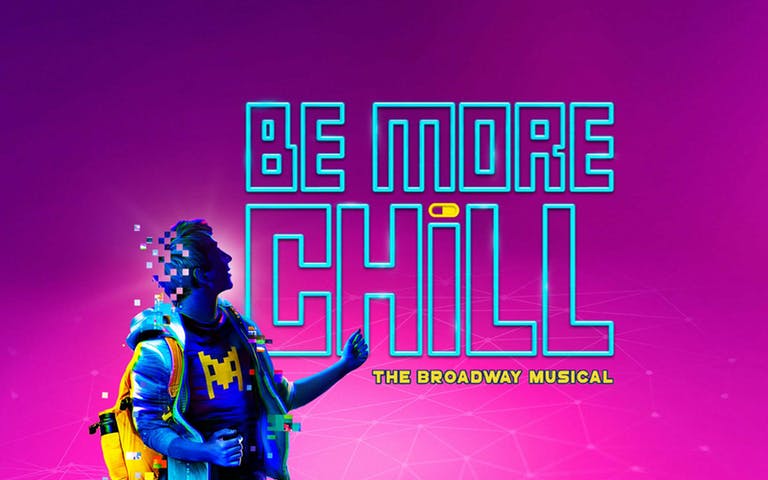 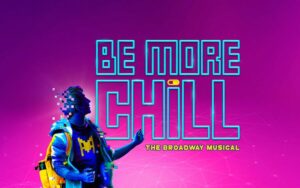 “Be More Chill” had its premiere at the Two Rivers Theatre in Red Bank, New Jersey, in 2015. The original cast recording went viral on the internet and was streamed over 100 million times. It opened Off Broadway at the Signature Theatre Center in July 2018, and moved to Broadway in February 2019.

Jeremy, a nerdy high school student is trying his best to fit in. He no longer wishes to be the outsider, he wants to be popular. He decides to take a “squip” (“super quantum unit Intel processor”). It is a pill from Japan, which contains a computer microchip that attaches itself to the brain and tells the user what to say.

Will Roland, who was last seen in the Off Broadway and Broadway casts of “Dear Evan Hansen,” is terrific as Jeremy. Jason Tam is evil and seductive as the “squip,” the pill that speaks to Jeremy.

The scene stealing performance is from George Salazar, who plays Jeremy’s best friend Michael. George has the “11 o’clock number” in the second act, “Michael in the Bathroom,” which he performs with great gusto and emotion. It is a sensational performance that won George a Lucille Lortel Award. Unfortunately and inexplicably, he was overlooked for a Tony award.

The Tony committee did not take a shine to “Be More Chill” in general. This might have been because the book by Joe Tracz, based on the novel by Ned Vizzini, seems silly; a high school student taking a pill to make himself popular. One needs to look at the bigger picture: what high school student wouldn’t do whatever it takes to be one of the popular students? It is the wonderful music and lyrics by Joe Iconis, with musical supervision and orchestrations by the extremely talented Charlie Rosen, that make this musical sing. It is an amazing score and, hopefully, Iconis will have many more chances to shine and become popular himself.

At this year’s Tony Awards, “Be More Chill” was refused a chance to perform a number from the show, even though the producers were willing to pay the production costs. Instead, James Corden, the Tony Award’s host, did a very silly parody number of “Michael in the Bathroom,” however, there was no mention of the original title of the song or that it was from “Be More Chill.”

In Broadway World, composer Iconis stated the following: “Just wanna set the record straight so there’s no confusion: I had no idea a ‘Michael in the Bathroom’ parody was happening on the Tony Awards. The first time I heard the song was when I was sitting in the audience, and I had nothing to do with the rewritten (and totally delightful) lyrics…. Our show is a little musical not based on a famous movie or a famous musical act and so national TV exposure is a huge deal for us. Hopefully folks who saw the parody last night will take it upon themselves to research what musical the song was actually from!”

Corden stated. “Our song ‘James in the Bathroom’ is a parody of an incredible Joe Iconis song from the musical @BeMoreChill it’s my favorite song of the season…”

The fantastic Iconis score and Salazar’s performance make this musical a must see before it closes. “Be More Chill” is playing until Aug. 11, 2019. 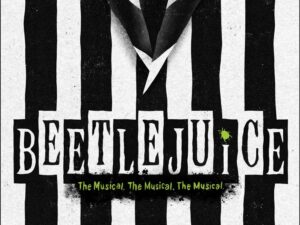 The poltergeist Beetlejuice is trying to get a living person to say his name, which will make him visible. He encourages a recently deceased couple, Barbara and Adam, to frighten the Dietz family, who has moved into their Victorian house.

The musical “Beetlejuice” is based on the 1988 cult comedy film directed by Tim Burton, who added some fun to the film. The Broadway musical has no fun at all. Though the Eddie Perfect score for this is better than the songs in “King Kong,” that isn’t saying much. The best two songs are ones not written by Perfect, but included in the film version. “Day-O: The Banana Boat Song” and “Jump in the Line” (Shake, Senora.) The book by Scott Brown and Anthony King are mostly composed of one-liners that are painfully flat and inside theatre jokes that go over the head of most of the audience. It is beyond bad.

Alex Brightman is playing the exact same character of Dewey Finn that he played in the Broadway musical “School of Rock,” which played at this same theatre, this time in fright wig and make up. He is extremely hammy and way over the top. The only reason to see this musical is for the performance of Leslie Kritzer, who gives a superlative comedy performance and is hysterically funny.

“King Kong” takes its plot from the iconic 1933 film that starred Fay Wray as Ann Darrow. Carl Denham is a director who promises to make actress Ann Darrow the star of his next big adventure film. Together, they travel to Skull Island and discover Kong, a 20-foot tall, 2,000-pound ape. Carl wants to capture Kong and display him in New York City. 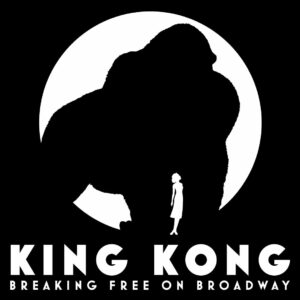 Jack Thorne, who won a Tony Award last year for “Harry Potter and the Cursed Child,” has updated and simplified the story for the stage. What worked in 1933 with Fay Wray, doesn’t work in 2019.

Christiane Pitts, who plays Ann, brings nothing to the role. Eric William Morris has a pleasant singing voice, but Carl is a thankless role.

Eddie Perfect is a singer-songwriter composer and actor. He has written the scores for two shows that arrived on Broadway in the 2018- 19 season: “King Kong” (for which Perfect wrote the songs, along with Marius de Vries) and the music and lyrics for “Beetlejuice.” Both scores are abysmal and the prime reason that both these movie to Broadway musicals are as bad as they are … in other words, far from perfect.

Kong is a combination of animatronics and puppetry. Some of the magic is taken away by the plainly visible rigging, and clearly seeing 14 stagehands move Kong around the stage. Yet, it is innovative and something that hasn’t been done on Broadway before, which is why it won a special Tony Award and Drama Desk Award for Outstanding Puppet Design for Sonny Tilders; and the Outer Critics Circle gave a special award to “the puppetry team that created and operates King Kong, recognizing the artistry and technical achievement that brings a 2,000-pound gorilla to life.”

The ape is the only reason to see this disaster and it is not enough.