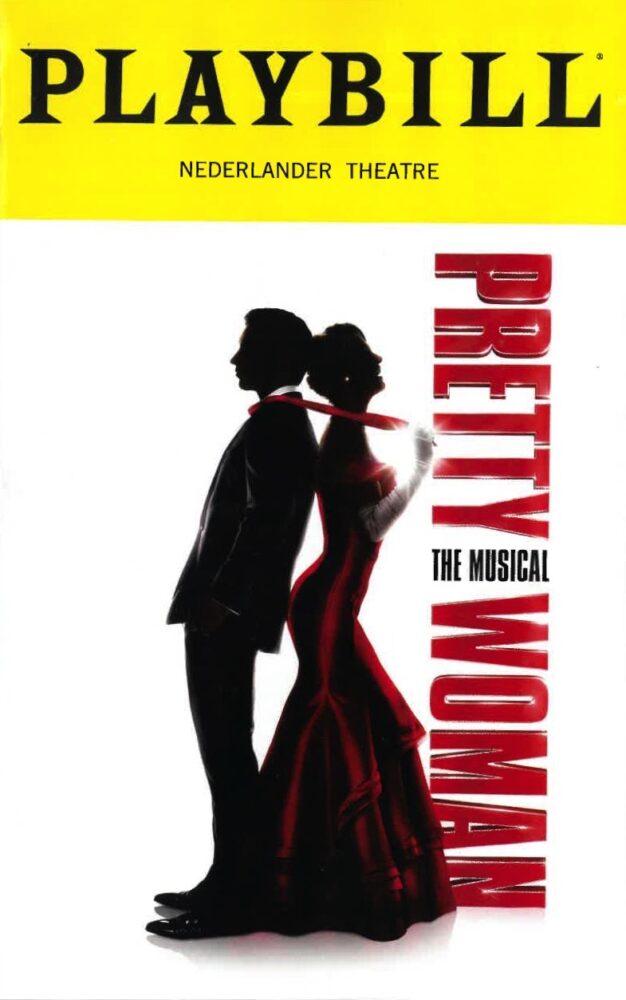 By Leonard Feigenblatt ~ “Pretty Woman” is based on the 1990 film that starred Julia Roberts and Richard Gere, which was directed by Garry Marshall (who died in 2016) and written by J. F. Lawton. The musical has a book by Garry Marshall and J.F. Lawton, which follows the film version very closely, in which Vivian Ward is a relatively new Hollywood Boulevard hooker. Edward is an extremely wealthy businessman, in Hollywood for business. Vivian runs into Edward when he gets lost on Hollywood Boulevard, and he ends up hiring Vivian to be his escort for the week.  Of course, by week’s end, they fall in love.

Let’s start with the music and lyrics in this production, by Bryan Adams and Jim Vallance – Sorry but they are unremarkable. This score really sinks the musical. A few chords of Roy Orbison’s song “Pretty Woman” would really have livened things up. However there is a bit of the opera “La Traviata,” albeit poorly sung.

Andy Karl, always a wonderful actor and singer, makes as much of Edward as he possible can. (Karl was chosen as the replacement of Tony Award winner Steve Kazee, who originated the role of Edward in the Chicago tryout but during Broadway rehearsals had a family emergency and left the musical.) The role of Edward, however, does not give him the opportunity to really shine, as he did when he starred in the musical “Groundhog Day” on Broadway in 2017. That musical score was similarly awful, yet he was able to rise above the material and turn in an amazing, award-winning performance.

Samantha Barks plays Vivian. She has a beautiful voice and looks terrific, but she has a problem making a role her own. When it opened on Broadway, Frances Ruffelle won acclaim and a Tony Award for her performance as Eponime in the musical “Les Miserables.” Barks portrayed Eponime in the 2012 film version of “Les Miserables” as well. But it was ultimately Anne Hathaway, who played Fantine, that walked away with the reviews and the Academy Award for Best Supporting Actress. Here, too, even though she is very good, there are two people who outshine her: the memory of Julia Roberts’ Vivian from the film version, and Orfeh, who plays opposite her in the musical, as her best friend and fellow hooker, Kit DeLuca.

Orfeh is a scene stealing sensation with a powerhouse voice. The other scene-stealer in this production is Eric Anderson. He plays two different roles: Mr. Happy, the man on Hollywood Boulevard, who sells maps of the stars’ homes; and Mr. Thompson, the manager of the Beverly Wilshire Hotel where Edward is staying in the penthouse suite. Anderson keeps both roles totally separate and steals every scene he is in. On his resume, under occupation, where he would fill in ‘actor,’ he could very easily fill in ‘thief.’

Jason Danieley is not so lucky in his portrayal of Edward’s lawyer, Philip Stuckey. Though he has an amazing voice, here, he hardly sings. He is very miscast and looks embarrassed and confused.

Fire Island Pines resident Jerry Mitchell is the director and choreographer of this production. He has done brilliant work on Broadway before. His choreography has won him two Tony Awards. One for the first Broadway revival of “La Cage Aux Folles” in 2005, and another for the 2017 “Kinky Boots,” which is still running at Broadway’s Al Hirschfeld Theatre. While Mitchell has choreographed many rousing dance numbers over his career, here he does nothing to liven up the proceedings.

“Pretty Woman” just blandly washes over you. The question to ask is, why do a musical based on a film if you have nothing to add and can’t improve on it?

There is a full bar menu for food and beverage but never a minimum at The Green Room 42.

The Green Room 42 (inside Yotel)