The musical “The Boy Who Danced on Air” is inspired by the 2010 PBS Frontline documentary, “The Dancing Boys of Afghanistan.” According to the authors’ note the “documentary about ‘bacha bazi’ – the ancient tradition where wealthy men buy boys from poorer families, train them to dance and often sexually abuse them.”

Paiman is one such dancing boy, now age 16, who was purchased by Jahandar, a married man now in his forties, when he was 10 years old. At first sad and scared, he soon finds a love of dance and becomes dependent on Jahandar. Though Jahandar would never cheat on his wife with another woman, he feels it is alright to be with boys as “men have needs.” As he explains, having dancing boys “allows us to maintain moral relationships with women.”

Paiman meets Feda, another dancing boy owned by Jahandar’s friend, Zemar. At first they are antagonistic, but a friendship develops through their mutual need for freedom and survival. Paiman and Feda soon fall in love.

Jahandar feels that sex between men is wrong, and reproaches his friend, Zemar for keeping Feda who he feels is too old to be a dancing boy at age 17. He also feels that Paiman is getting too old as well, that he should be married to a woman, and traded in for a younger boy.

Jonathan Raviv plays the despicable Jahandar, and as a credit to his acting abilities makes him sympathetic – no easy feat. As Feda, Nikhil Saboo plays the role with great gusto. It is Troy Iwata’s performance as Paiman however, that is a revelation. He is making his off-Broadway debut and for a young actor just starting out, he is assured and poised. Iwata’s performance is equally fierce and heartbreaking. A triple threat performer who dances, sings and acts with great aplomb.

Tim Rossner and Charlie Sohne have created, with the help and vision of director Tony Speciale and choreographer Nejla Yatkin, a beautiful and original musical on a very difficult subject.

“The Boy Who Danced on Air” is running at the June Havoc Theatre through June 11. 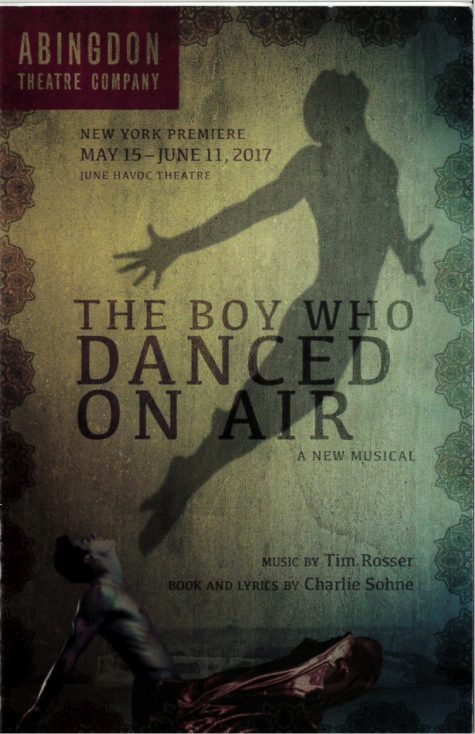