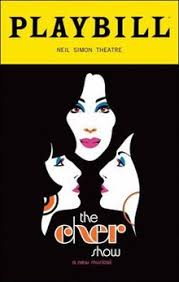 “The Cher Show” is a biographical jukebox musical, using the songs made famous by Cher, while telling her story. The cast is a wonderful ensemble and has three actresses playing Cher at different stages in her life.

The cast is rounded out by Emily Skinner as Cher’s mother, Georgia Holt; Matthew Hydzik, as Gregg Allman; Michael Campayno, as Rob Camilletti; Michael Berresse, as Cher’s costume designer Bob Mackie, who also designed the costumes for “The Cher Show;” and Jarrod Spector, who made his Broadway debut as Gavroche in “Les Miserables,” and has since then played three different real life men: Frankie Valli in “Jersey Boys,” Barry Mann in “Beautiful: The Carole King Musical” and now, Sonny Bono.

There is wonderful choreography from Tony Award winner Christopher Gattelli. Charles G. LaPointe should be singled out for his brilliant hair and wig design. Rick Elice, who won a Tony for his book of “Jersey Boys,” has written this book. It is a fair effort. This is probably at the request of Cher, however, in the musical, Sonny and Cher refer to their child as Chaz. Though this probably always was her nickname, viewers of “The Sonny and Cher Show,” saw a little blonde girl each week, referred to by her parents as Chastity. In real life, Chastity transitioned and became a transgender man, Chaz. It would have been much more interesting to address this and find out Cher’s reaction.

This musical does have two elements that set it apart. Both have won Outer Critics Circle, Drama Desk and Tony Awards, this year, for their excellence and deservedly so. They are the costume designs of Bob Mackie and the actress Stephanie J. Block who plays “Star” Cher. Mackie has, through the years, created the many outrageous and fun looks for Cher. The three Chers are constantly having costume changes and never appear in the same costume twice. Each and every costume is stunning.

Block has one of the purest and most organic voices on Broadway. She made her Broadway debut playing Liza Minnelli to Hugh Jackman’s Peter Allen in the musical “The Boy from Oz.” She is well versed in becoming a character that is very well known in real life. In a career that has spanned six decades, Cher is a very well known, iconic singer and actress. Block totally embodies Cher, and in capturing her essence, does it effortlessly. If you close your eyes, while Block is singing, you could swear that Cher herself is singing.

If Cher is your goddess, this is your musical. Production runs through Sunday, Aug. 18, 2019.

The first production of the 2019-2020 Broadway season is a revival of Terrence McNally’s “Frankie & Johnny in the Clair de Lune.” The production premiered Off-Broadway in 1987, with Kathy Bates and Kenneth Welsh. In 1991, it was turned into a film. Bates, who originated the part Off-Broadway, was passed over for the role of Frankie for a totally miscast Michelle Pffeifer, opposite Al Pacino. In a twist of fate and poetic justice, at the 1991 Academy Awards, Bates won the Oscar for Best Actress for her brilliant performance in “Misery.” It was revived on Broadway in a 2002 production that starred Edie Falco and Stanley Tucci. At this year’s Tony Awards, McNally, one of America’s greatest playwrights, received a Tony Award for Lifetime Achievement.

Frankie and Johnny are both loners and coworkers. She is a waitress and he’s a short order cook. The play opens with them spending the night together, having a one-night stand and afterwards trying to connect on a deeper level. Johnny wants to turn this one-night stand into something more. Six-time Tony Award winner Audra McDonald gives a lovely performance as Frankie, but it is Academy Award and Tony Award nominee Michael Shannon who steals the acting honors and our hearts as Johnny. He gives an extremely real and honest performance. This is a very touching and heartfelt revival.

“Frankie & Johnny in the Clair de Lune” is scheduled to play a limited engagement through Aug. 26, 2019.