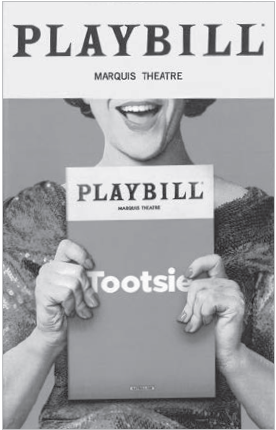 Michael Dorsey is an unemployed actor who is very difficult to work with. He transforms himself into Dorothy Michaels to try to get a part in the big new Broadway musical (in the film, it was a role in a soap opera) “Juliet’s Curse,” a sequel to “Romeo and Juliet,” and lands the role of Juliet’s nurse. Through Dorothy Michaels, Michael Dorsey channels his inner woman and through that becomes charming and alluring to everyone.

The are two elements that make this musical exceptional: The book, by Robert Horn, is a nonstop laugh riot, with the one liners coming at you fast and furious, from beginning to end; and the leading performance of Santino Fontana as Michael Dorsey/ Dorothy Michaels. He is an attractive man who makes a totally believable woman.

It is a tour de force performance. “Tootsie” was nominated for 11 Tony Awards, and on June 9, 2019, took home several trophies including Fontana for Best Actor in a Musical, and Robert Horn for Best Book of a Musical – both well deserved. The rest of the cast follows suit and are uniformly excellent, basically because they have an amazing script to fall back on.

The standout performances in the supporting cast come from Andy Grotelueschen as Michael Dorsey’s roommate, best friend and confidant, Jeff. Grotelueschen is the perfect foil and he and Fontana have this great chemistry and play very well off each other. Lilli Cooper plays Julie Nichols, the role that won Jessica Lange her first Academy Award. Lange’s Julie was more dainty, while Nichols’s Julie is more self-assured and self-reliant and she has a glorious singing voice. David Yazbek, wh last year won a Tony Award for his beautiful score for “The Band’s Visit,” has written a nice score for “Tootsie,” with an entirely different sound than that of “The Band’s Visit.” The director Scott Ellis does a wonderful job of keeping everything moving. The quick changes of Michel Dorsey becoming Dorothy Michaels and back again are jaw dropping. Denis Jones’s choreography is bouncy and jubilant.

This is how to do a film to Broadway musical adaptation and do everything right. Kudos to all.

“Hadestown” began as a concept album by composer Anaïs Mitchell in 2010. The musical premiered at the New York Theatre Workshop in 2016. It was then reworked and premiered at the National Theatre in London in November 2018, before arriving on Broadway this March.

“Hadestown” is based on the Orpheus and Eurydice myth, updated to a depression era New Orleans nightclub. Orpheus and Eurydice meet and fall deeply in love. When Eurydice is killed by a snakebite, Orpheus travels to the underworld to plead with the King of the Underworld, Hades, to bring Eurydice back to life.

Mitchell, who has written the wonderful music, lyrics and book for “Hadestown;” along with Rachel Hauck’s scenic design; Michael Krauss’s costume design; Nevin Steinberg’s and Jessica Paz’s sound design; and, in particular, Bradley King’s evocative lighting design, all come together to create the mood and ambiance for this musical to thrive.

Rachel Chavkin, who helped develop this piece with Mitchell, is the outstanding director. She is, by far, the most innovative and creative director working today. She has proven this before with her direction of “Natasha, Pierre and the Great Comet of 1812,” but this time, she has and will continue to be awarded for her genius.

The cast is an amazing ensemble. Orpheus is described as having a “golden voice” and is able to “charm all living things.” Reeve Carney is the personification of that, as he does have a golden voice and has charm and charisma to spare. Eva Noblezada, who previously starred in the West End and Broadway revival of “Miss Saigon,” is a beautifully voiced Eurydice. Amber Gray, who previously appeared on Broadway in “Natasha, Pierre and the Great Comet of 1812,” for which she won a Theatre World Award for her Broadway debut performance, is glorious as Persephone, wife of Hades and goddess of the seasons. She gives a thoroughly winning and fun performance. Best yet are the two scene-stealing Broadway veterans. Patrick Page, whose deep, basso profundo voice creates a memorable Hades; and Andre De Shields as Hermes, the messenger of the gods and the narrator of the story. De Shields glistens in a silver suit, glides and saunters through the proceedings, taking the audience along for the ride. In a career that has spanned 50 years, the multiple Tony nominated performer has delivered show stopping performances in “The Wiz” and “The Full Monty.” This time, for “Hadestown,” De Shields finally received his well-earned Best Actor in a Musical Tony Award, and he will continue to be rewarded for his amazing performance.

De Shields’s Tony was one of eight that “Hadestown” took home on June 9, 2019. Others included in the sweep were Best Musical; Anaïs Mitchell, Best Original Score; Rachel Hauck, Best Scenic Design of a Musical; Bradley King, Best Lighting of a Musical; Nevin Steinberg’s and Jessica Paz’s, Best Sound Design of a Musical; Rachel Chavkin, Best Musical Director; and finally Michael Chorney and Todd Sickafoose for Best Orchestrations. Each and every one is well deserved for this ground breaking production. Bravo everyone!