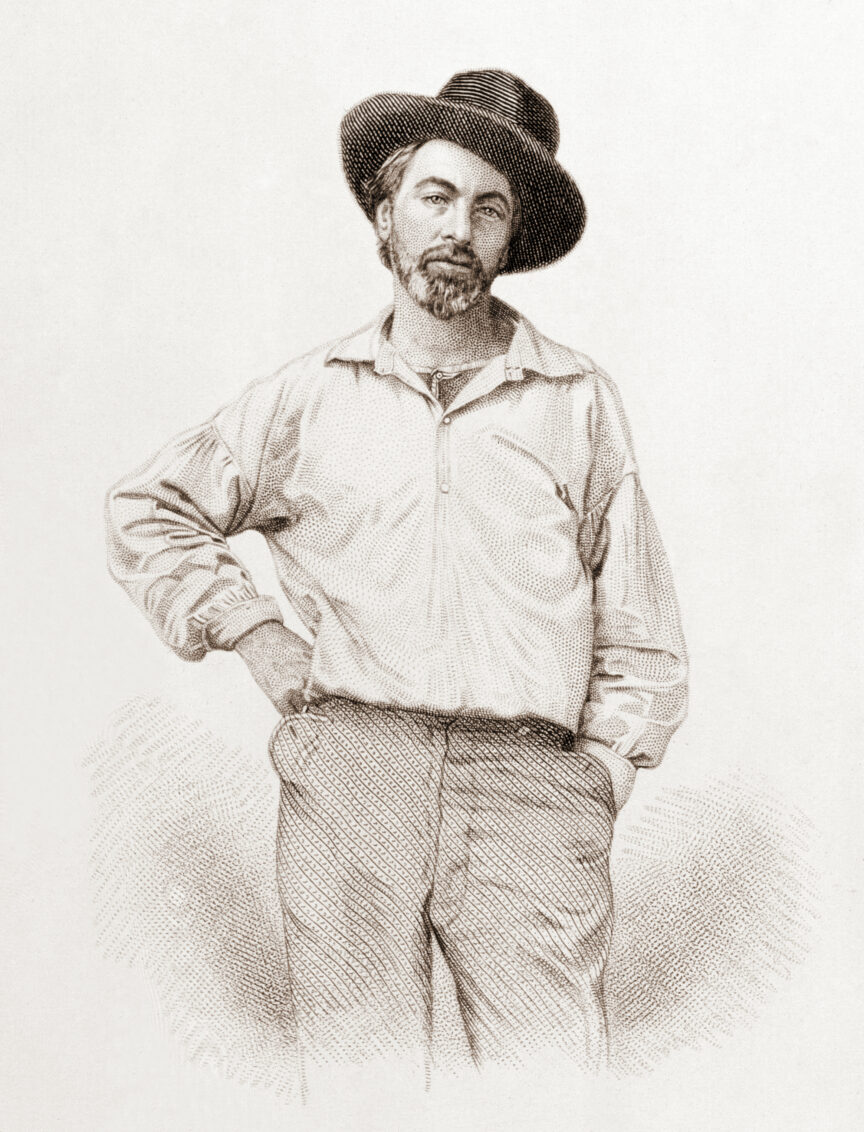 We celebrate your birth! “Starting from fish-shape Paumanok, where [you were] born, well-begotten, and rais’d by a perfect mother…isle of salty shore and breeze and brine.” Printer’s Devil, typesetter, pressman, editor, publisher, teacher, writer, government clerk, nurse, poet of the exclamation point!

You wrote of yourself, “Walt Whitman, an American, one of the roughs, a kosmos, disorderly, fleshly, and sensual, no sentimentalist, no stander above men or women or apart from them, no more modest than immodest.”

Spanning transcendentalism to realism, founder of American poetry in a nation no older than a lone man’s life span, singing the praises of exuberant, young America, Whitman was Democracy. “His compositions, at least; being like it, ignorant, sanguine, noisy, coarse, and chaotic!”1
“I celebrate myself,
And what I assume you shall assume,
For every atom belonging to me, as good belongs
to you.”

Almost out of breath with exaltation, we sing a song of celebration! A book of poetry! “Leaves of Grass” was born, fittingly, on the Fourth of July, 1855, and went through nine revisions until its “Deathbed Edition,” in 1891. Containing but 12 untitled poems within its first edition – a mere 795 copies published and paid for by Whitman – this future canon was generally ignored except for several reviews calling it “trashy, profane and obscene,” and its author “a pretentious ass.”

Ralph Waldo Emerson, on the other hand, wrote, “I find it the most extraordinary piece of wit and wisdom that America has yet contributed…I find incomparable things said incomparably well as they must be. I find the courage of treatment which so delights us, and which large perception only can inspire.”2 Ezra Pound called Whitman, “America’s poet…He is America.” Biographer, editor, and critic, William Sloane Kennedy wrote, “People will be celebrating the birth of Walt Whitman as they are now the birth of Christ.”

It should come as no surprise, then, that Whitman had “not one a barleycorn less” of appreciation for his own talent, sounding his barbaric YAWP to the beautiful and perfect multitudes. In “Leaves of Grass,” one poem [reaching beyond 1,300 lines, later appropriately titled “Song of Myself”] reads in part, “Divine am I inside and out, and I make holy whatever I touch or am touched from; The scent of these arm-pits is aroma finer than prayer…I breathe the fragrance myself and know it and like it…while they discuss I am silent, and go bathe and admire myself.”And “am not contained between my hat and boots.”

Whitman’s sensitive nature, however, was profoundly affected by the Civil War. In his book “Memorandum of War” he described the horrors he came upon, “a heap of amputated feet, legs, arms, hands, &c., a full load for a one-horse cart.” There were, he wrote, “human fragments, cut, bloody, black and blue, swelled and sickening. Nearby were several dead bodies…each cover’d with its brown woolen blanket.” The sight moved him to volunteer as a nurse. He helped surgeons with amputations, and assisted in the burial of bodies, still bloody, lying on battlefields. He then turned to console the wounded soldiers, soothe them, and write letters for them.

Somewhat chastened by the war, Whitman wrote less self-aggrandizing, some might say less self-conscious poetry. “Drum Taps,” which he included in later editions of “Leaves of Grass” contains 43 poems.

“To the drum-taps prompt, the young men falling in and arming; the mechanics…blacksmiths… lawyer…judge…driver…salesman––the boss, the book-keeper, porter all leaving; squads gather everywhere by common assent, and arm…”
“The tearful parting––the mother kisses her son–– the son kisses mother. (Loth is the mother to part––yet not a word does she speak to detain him; …”
“(Silent cannons––soon to cease your silence, soon unlimber’d to begin the red business.)”

Whitman lived an unconventional life. He never married and his affections for young men, whom he called “my darlings and gossips,” continued throughout his life. Whitman, the only passenger on a streetcar, met its conductor, Peter Doyle, one night. As Doyle later recalled, “We were familiar at once – I put my hand on his knee – we understood.”3

Before Doyle, there was Fred Vaughn, who may have inspired Whitman’s “Calamus” poems. There were, as well, Bill Duckett and William Stafford. Stafford wrote to Whitman about a ring Whitman had given him, “You know when you put it on there was but one thing to part it from me, and that was death.”

Whitman’s “obscene” poetry and bohemian lifestyle continued to dog him. Shortly after the war, Whitman was fired from his job in the Interior Department because of his questionable “moral character.” A long-time friend, William Douglas O’Connor, immediately came to Whitman’s defense – at great risk to O’Connor’s own career. O’Connor secured a position for Whitman in the Bureau of Indian Affairs, and published a vigorous defense of Whitman in a 46-page pamphlet, lauding his poetry, his hospital work, and his love of country. It was entitled “The Good Gray Poet.” The pamphlet’s message transformed the “immoral” poet into the “good gray poet,” an appellation that stuck with him for the rest of his life.

Whitman gained international fame in 1868 when William Michael Rossetti, a writer and critic, published “The Poems of Walt Whitman” in England. Rossetti demanded changes to some poems but Whitman objected, “I cannot and will not consent, of my own volition, to countenance an expurgated edition of my pieces.”4 So, Rossetti merely eliminated any poems he thought his readers might find objectionable and published the rest.

In 1873, Whitman suffered a paralytic stroke, partially paralyzing his left side, forcing him to move in with his brother George, his mother, and his youngest brother, Edward. Three days later, his beloved mother passed away casting Whitman into a deep depression.

Whitman was finally able, both physically and financially, to buy a home of his own in 1883, in Camden, New Jersey. While there he continued working diligently. He finished the final revision of “Leaves of Grass,” assembled the “Memorandum of War” from journal entries and notes, and wrote “Specimen Days,” as well as some lesser-known works.

Walt Whitman died in his Camden home on March 26, 1892, at the age of 73. More than a thousand visitors came to pay their last respects, his coffin barely visible beneath all the wreaths and flowers.

In his poem, “When Lilacs Last in the Dooryard Bloom’d” Whitman confronts death:

“Come lovely and soothing death,
Undulate round the world,
serenely arriving, arriving,
In the day, in the night, to all, to each,
Sooner or later delicate death.”