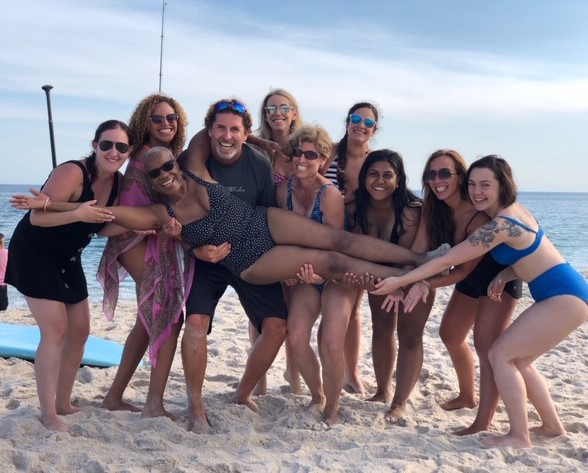 The party’s over – seems like Memorial Day was yesterday, and here we are on the cusp of Labor Day and there is still so much more to talk about in Ocean Bay Park.

The annual Ocean Bay Park Community Fair was held at the Schooner Inn on Aug. 10. Working together we all rocked it and it was a resounding success. The Fair has been held every August for close to 50 years and is the main fundraising event for our homeowner’s association. The funds generated are used for community services and improvements. In addition to the raffles and silent auction, this year we added goldfish racing to the child friendly activities along with the face painting. As one of the co-chairs of the Fair, along with Cami Meyer and Lisa Jaffe, I would like to personally thank all the on and off-island business owners and individuals who donated the food items along with the goods and services and gift basket items for the silent auction and especially Lisa Jaffe, whose professional event planning skills made it all happen. It was great to see some new faces among the volunteer workers along with the stalwarts who have worked the Fair for as long as I have lived here.

The following day, the 13th Fire Island 5KRun for Rose race took place. This annual event is a 5K run to benefit the Rose DiGangi Foundation, which supports brain cancer patients and their families. I don’t run but I do volunteer as a course marshal and some of the OBPers I saw “race” by were Liz Guber, Don and Joanne Madeo, Anthony Lumagui and his mom, Bonnie. As he rounded the corner of B Street, my duty spot at the halfway point, I asked Seaview’s Woody Rubin how he was doing and he answered, “I’m doing great but I could use a piece of your cake!”

The summer may be coming to an end, but that hasn’t stopped the parties. In Ocean Bay Park, we never need an excuse to celebrate and in August there were birthday and house parties going on all over the town. We helped our young neighbor, Patryk Kozyra, mark his 14th birthday with a dinner hosted by his parents, Danny and Anet, at Schooner’s. They spend their summers in Ocean Bay Park then return to their home in Krakow, Poland. They live across the road, so we have watched Patryk grow up. We have also “listened” as he learned to play the saxophone under the tutelage of ace sax player, Tristen Visitacione. Patryck is now so good, he made his solo debut that evening.

At the same time, Florence Goldberg held a surprise 50th birthday party for her husband, Jon, as well as their friend, Leslie. Then there was a birthday dinner at the Kotzens catered by the FI Hotel’s Melissa Dodici. Down the road on Erie, Joyce and George Greenberger celebrated their 53rd wedding anniversary at the 50th birthday party they hosted for her goddaughter, Denise Tait. At “Bamboozled,” we were getting ready to celebrate the upcoming birthdays of our brother-in-law, Robert “Bert” Winters’ 50th birthday and our grandson, Nicklas Gaby’s, 17th birthday.

School is still out for summer so Steven Jaffe hosted a day at the beach for some of the teachers from his school The Manhattan New School, PS 290, on the Upper East Side. Since they teach grades 1 through 5, you know a day at the beach was just what they needed to get themselves ready for September.

I won’t be able to bring you the results of the annual Seaview vs Ocean Bay Park baseball game and whether we defend our title until next year, but I can report that the kids trounced the moms in the annual Bob Pitler Memorial Moms vs Kids game. The game was played on Saturday, Aug. 17, at Newman Field, with Bob’s daughter, Rebecca, in attendance. The score was so lopsided I won’t embarrass the moms by recounting it. Don’t worry moms, there’s always next year.

Being too old to participate in the first annual Ocean Bay Park Catch and Release Fishing Tournament on Aug. 24,
Steve and I went fishing with my brother, Stephen Lott, and his wife, Diane. Along with Mike Supple and Lanny Vannoni, we booked an afternoon on a charter boat. When we went down to the dock for the water taxi over to the charter, we were surprised to see who our captain and first mate were – John Gagliano and Jim Parker. Both are now retired from the Suffolk County Police Department and are working for the Fire Island Water Taxi. They were SCPD Marine Division officers stationed on FI for a number of summers and are active in Tour de Force. The Tour de Force’s dual mission is to honor the victims of 9/11 by keeping their memory alive through cycling events, and to raise funds to benefit the families of law enforcement offices nationwide who were killed in the line of duty, making the ultimate sacrifice. We all had a great day out on the bay, although I was the only one to catch a keeper. After it was filleted, I took home 11 ounces of fish, which was hardly enough for dinner. My brother took the fish home to City Island, and his cats, Bonnie and Clyde, thoroughly enjoyed their fish “imported” from Fire Island!

There is still so much to come, I’ll have to keep a diary so that we can all catch up next May. We anticipate that the long awaited beach replenishment project will finally come to Ocean Bay Park sometime this winter. I am keeping my fingers crossed until then that the beach holds up and the project to rebuild the dunes is successful. Hopefully there will be a replenished and beautiful new beach to enjoy when you all return next summer. Until then, peace, love and let the sunshine in!