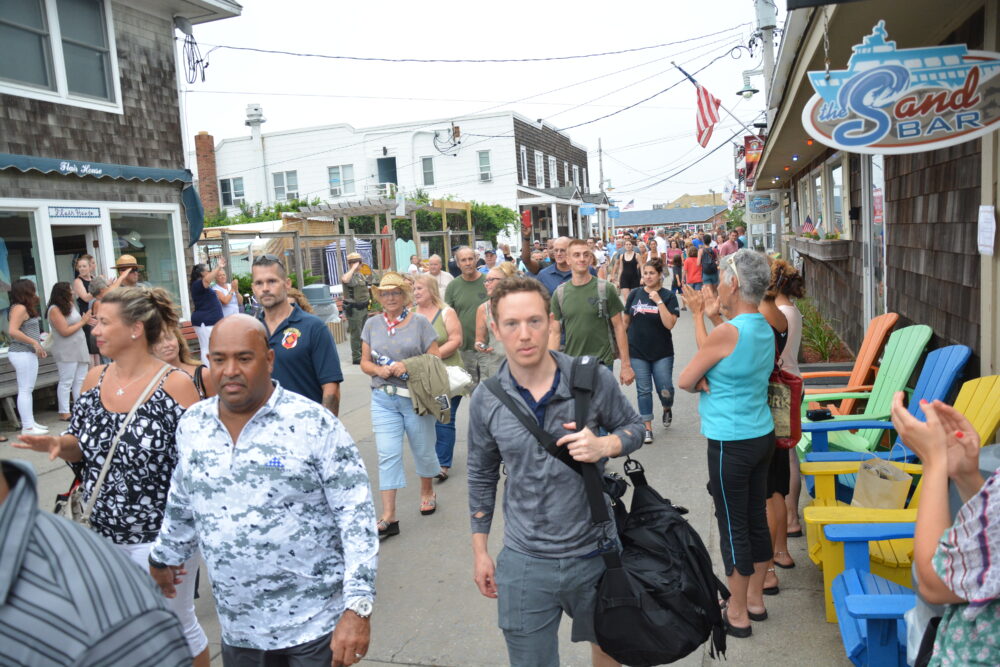 “Restoring Self – Family – Hope.” Those four words both summon and summarize the purpose and ethos behind Warrior Appreciation Night, a celebration dedicated to helping returning veterans who struggle with their reintegration into society. It’s a cause dear to the hearts of many Americans, and the reason behind the much-beloved and long-standing event that came back to Ocean Beach on Aug. 18.

An annual parade and dinner hosted by the Ocean Beach Fire Department (OBFD), Warrior Appreciation Night is the community’s way to let vets who have served their country know that they’re not alone in their struggles now that they’re home.

Most people realize that all too many veterans have found that adjusting to civilian life, after undergoing the physical and emotional scarring of war, is in its way a challenge even more difficult than combat or rehabilitation. Problems ranging from unemployment, family breakdowns, substance abuse, even a suicide rate far above the national level, continue to afflict veterans who have already coped with and given so much.

“These vets come back in all sorts of conditions,” explained Chief Ian Levine of the OBFD, emphasizing that while many of the veterans honored by this event down the years bear visible physical scars, many more also suffer from the invisible scars of psychological distress. “There are so many around, with emotional as well as physical needs.”

Chief Levine recalled the origins of the evening. “About 10 years ago we were approached by a Suffolk County police captain about hosting an evening for wounded warriors,” Levine said. “He had been to such an event the night before. They were looking for other towns to host another event and thought Ocean Beach would be a great place. It started the next year.” Although recovery efforts from Hurricane Sandy resulted in the event being put on hold for a couple of years, it eventually resumed and has grown larger with each passing year. 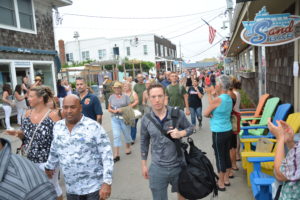 Some of the men and women who served coming to Fire Island as guests of honor. (Photo by Lauren Chenault)

“This year we’ll have the most vets ever,” said Levine, who expected about 90 veterans, plus their families, to attend. Levine said he was gratified that representatives from almost every Fire Island fire department would be present for the event, along with representatives from the Suffolk County Marine Bureau, several mainland fire departments, the Coast Guard, Town of Islip and the Fire Island National Seashore. The Suffolk County Police Bagpipes and Drums Corps, made up of retired police officers who volunteer their talent, accompanied the veterans.

Levine estimated that over the years the event has raised between $100,000 and $150,000 for various causes and organizations, all dedicated to aiding returned veterans. Each year, different groups are selected to receive the monies raised. Levine and former OBFD Chief (and former Ocean Beach Mayor) Joe Loeffler said that this year’s contributions would go to four organizations: Project Nine Line, a group set up to deal with the problem of suicide among veterans; Hope for the Warriors; Vet Hack, an organization that helps vets acquire prosthetics and other needed items; and the Veterans of Foreign Wars, represented by Brentwood Post’s Joe Loeffler (Sr.) Legion. A critical element in choosing which groups are earmarked for donations is how much of the money raised will actually go to helping veterans themselves, not to cover administrative costs and other overhead. This is one reason, said Loeffler, why the OBFD usually opts for local organizations, staffed by volunteers, that have little or no overhead expense and a proven record of spending “100 percent, or very close to it” of all money received on veterans.

Chief Levine noted that the evening began well before the vets reached Fire Island. It started with the veterans and their families being picked up in Manhattan and given a police escort to the Nassau County line. After arriving in Bay Shore, they were met at the Fire Island Ferries terminal by the Bay Shore Fire Department, where fire trucks with ladders were raised in tribute, while the department’s band played and the vets were honored in a brief ceremony. From there, a boat provided by Fire Island Ferries carried them across the bay, escorted by fireboats from the various fire departments as well as the Marine Bureau, and climaxed by a water fusillade along the Ocean Beach bayfront. Once in the village, the veterans and their families marched from the dock to the Community House as members from the OBFD and other agencies stood in salute along the route.

A large group of dignitaries was on hand at the Community House to give brief words of welcome to the veterans, led by Chief Levine and former chiefs Loeffler and Andy Miller, each of whom recounted a portion of the event’s history and spoke of its meaning for all participants.

Father Richard Henning of Our Lady of the Magnificat Catholic Church delivered the benediction, with short comments in praise of the nation’s veterans and thanks for their service made by Islip Town Supervisor Angie Carpenter, State Senator Phil Boyle, FINS Superintendent Chris Soller and Ocean Beach Trustee Jason Bendicksen. Gene Wu, himself a vet who overcame his own readjustment problems to start Vet Hack while embarking on a successful career of his own, spoke of what events such as this mean to veterans like himself. Following the official welcoming ceremonies the vets, their guests and dignitaries enjoyed the community’s dinner at the OBFD’s Fire Hall, featuring a 20-minute performance by the bagpipers. But it’s the larger effect of such evenings on those who witness or participate in them that has a special importance.

“This event does as much for us as it does for the vets,” said Loeffler. “We have to keep in mind that they’re still fighting a war and we have to help them readjust. There’s a tremendous need to make them feel whole.”

“This is a great Fire Island event,” said Levine. “People come from all around the island to be a part of it.” But it’s what they’ve been able to do for our veterans that means the most to the hosts. “We have to let them know they’re not forgotten.” Year after year, Warrior Appreciation Night accomplishes that mission.