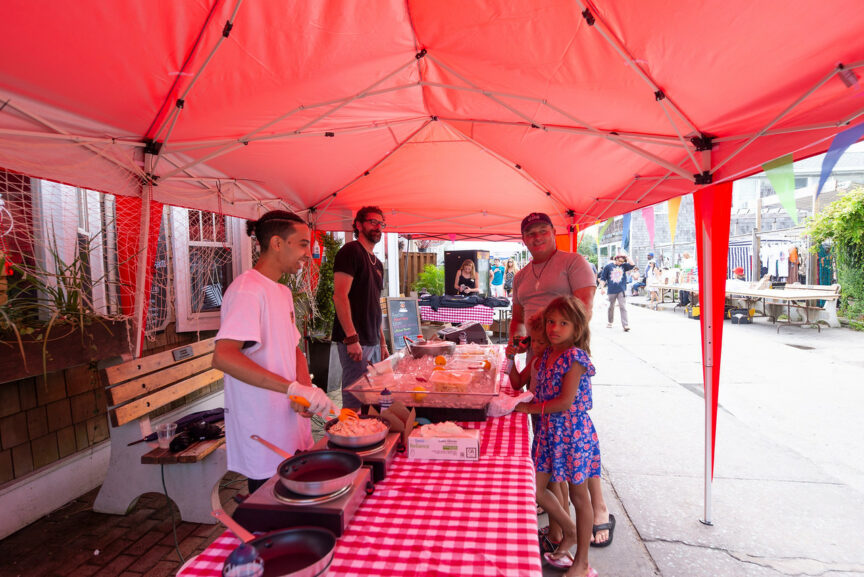 By Emma Boskovski and Danielle Lipiec 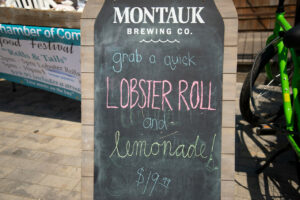 The Ocean Beach Chamber of Commerce kicked off its very first Music and Seafood Festival on Tuesday, Aug. 6, with games, sales and of course, an abundance of seafood and live music. Co-sponsored by the Fire Island News, the threeday festival gave friends, families and visitors for the day an opportunity to enjoy all the commercial district of Ocean Beach has to offer.

Banners, flyers and signs decorated Ocean Beach to announce the first Chamber event since its formation this past spring. Seafood dinner specials began at $19.99 at participating restaurants, with live music to accompany. Musical acts of all kinds played from noon until 10 p.m. throughout the festival.

“We wanted to do something for the community,” said Chris Mercogliano, chamber co-president. “We wanted to tie in the residential district and the commercial district by uniting great music and great food. How else would you do that? We also wanted to make the event about family, and we’ve done that with three tents in the center of town, and on the east and west sides. Face painting, aerialists, jugglers … we wanted to include something for everyone.” Right along Bayview Walk, Rachel’s tied into the event by selling fish and chicken tacos and lobster rolls. For dinner, Rachel’s Restaurant and Bakery offered a Desenzano dish with roasted vegetables and a halibut with celeriac cauliflower and couscous, among other dishes.

“We wanted to be part of the community and I think everybody should be involved when the whole village is,” said Joe Doering, son and owner of Rachel’s. “It’s fun and different!”

Over at CJ’s Restaurant and Bar, Johnny Irish, Bobby Digital, Johnny Kroo, and J. Haus entertained both the festival and dinner special crowds with live music.

“I think this event will be great for the community because it will bring everybody together,” said Mercogliano. “We have people here in town who haven’t been here in years, we want them to come into town and be a part of our community. I think this will be an everlasting event – hopefully everyone will want an encore.” Castaway offered their Clam Jam Happy Hour special from 4-7 p.m., with clams on the half shell for $1.25, $1.50 oysters on the half shell, $1.50 clams casino, $2 oysters Rockefeller, and $2 fried buffalo oysters.

The Sandbar buzzed with live music each day of the festival with performances by Jimmy and the Parrots, John Saboca, and Tonight’s Entertainment. The Island Mermaid welcomed the crowds with a jug of pink lemonade, as they offered up two lobster rolls and a cup of lemonade for $19.99.

Throughout the three days of the fest, The Landing had $19.99 Parmesan-crusted cod, shrimp scampi on pasta, and a Fire Island sushi roll written in for its dinner specials. 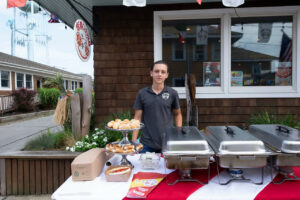 Bocce Beach had $5 specials on the street of the festival: crawfish dip, bang boom shrimp, lobster and shrimp bruschetta.

Maguire’s Bayfront Restaurant was the only establishment to offer vegan options that we came across during the festival – a ceviche with pineapple, mango, tomato, cilantro, and onions. They also offered a shrimp cocktail with Columbian style Russian sauce with mayo, ketchup and honey.

Matthew’s offered $5 clams on the half shell, peel-n-eat shrimp, a calamari bowl and a tuna sushi bowl. Matthew’s also hosted a ring toss outside of their restaurant and a sand art station for kids to enjoy.

“We want to get the family, fun, and community together,” said chamber Co-president Jennifer Morano. “I live here year-round and my family’s business has been here for 47 years. We feel that the town needs to work together, because it takes a village.”

Despite its title, there was more available to revel in at the festival than just food and music. Each day offered varying forms of entertainment for children, ranging between carnival games, face painting and caricatures, a dunk tank, kids karaoke, and performances by a magician and mermaid acrobat.

“With all of the fun activities for kids, I think that will get people coming out,” said Morano. “There’s really nothing for kids to do here except for the camp, so we wanted to add some fun for them in the community.”

Various raffles put together by donations from Ocean Beach Chamber of Commerce members allowed festival- goers a chance to win an assortment of prizes. Restaurant and market gift cards, pizza and pastry vouchers, and prizes from Kline’s and K-Mac Electric were some of those in the mix.

Even those without seafood or music to offer made sure to participate in the event. Ice Castle Sweet Shoppe proudly displayed a tent full of toys and candy, while Salty Stitch held a sidewalk sale consisting of multiple discount racks, ranging from 30 to 60 percent off original retail prices.

To reach the level of success they hoped for, the Ocean Beach Chamber of Commerce enlisted Sean and Lindsey Klentzin, owners of Fire Island Apparel, to handle publicity and advertising.

“Sean helped with all of the publicity and social media advertising, such as Facebook and Instagram ad placement. I helped with the backend work,” said Lindsey. 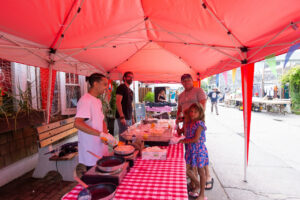 The CJ’s booth at the festival

The Klentzins, whose involvement in the Ocean Beach commercial district spans over their four clothing stores – Bambootique, Fire Island Outfitters, Salty Stitch and FiveEightThree –felt it was necessary to have a hand in putting together such an essential community event.

“It was great to have an event centered around the community and families. All of the activities at the seafood festival were family-friendly, which was important to all of the business owners participating,” said Lindsey.

“For the first year of the Ocean Beach Seafood Festival, it was very successful. It was great to hear the positive feedback from members of the community about how much they enjoyed the event – Mostly from families who were very excited that there were weekday activities for their kids.”