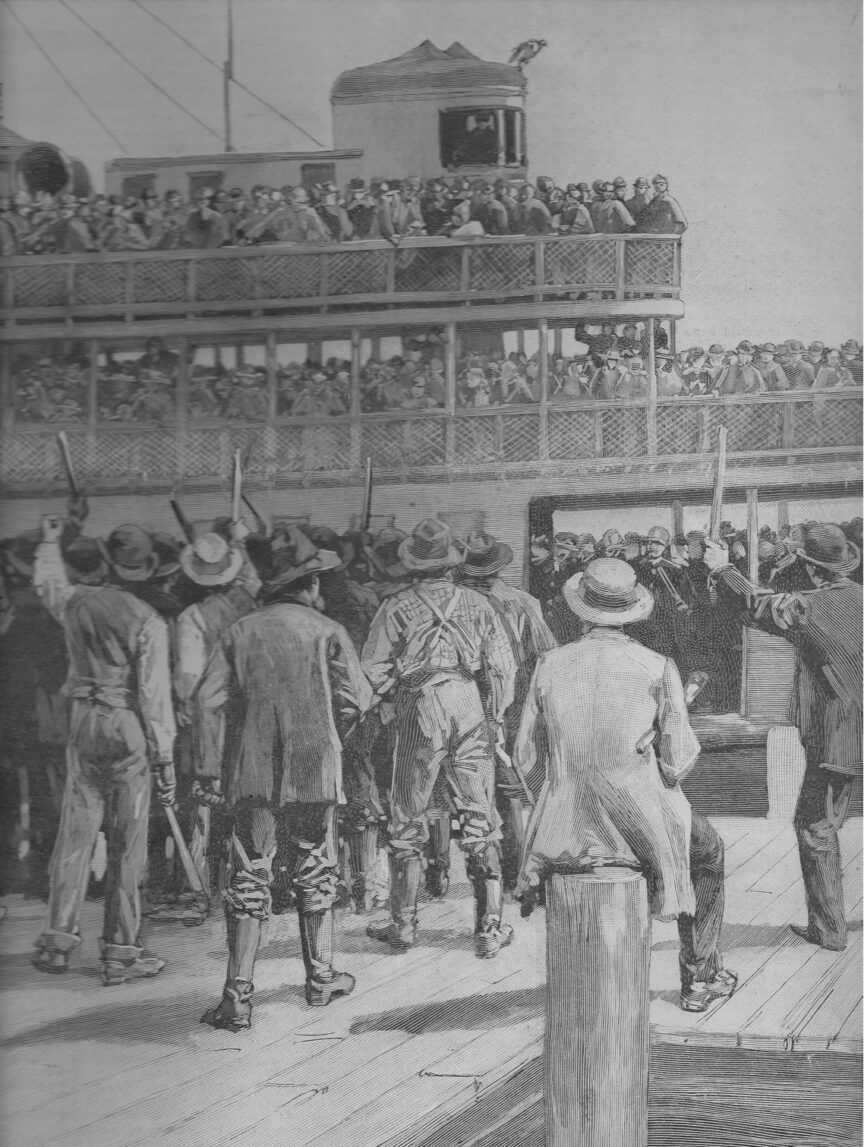 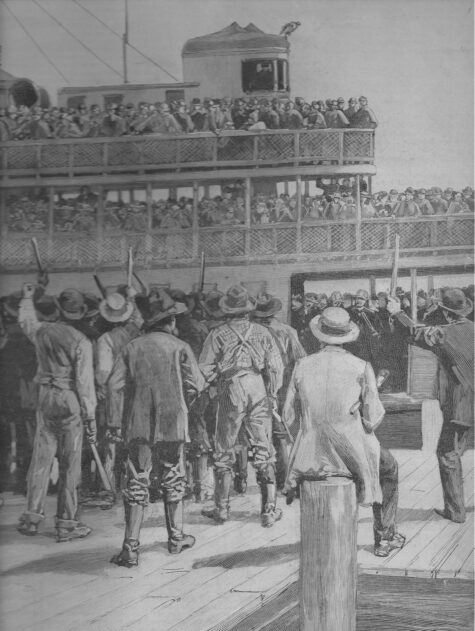 A Harper’s Weekly artist’s depiction of the mob meeting the “Cepheus” on Fire Island, trying to prevent the passengers from disembarking at the Surf Hotel in 1892.

AS ISOLATED AS FIRE ISLAND is it has had more than its share of pandemics. COVID-19 is only the latest, and thanks to the leadership of mayors, police officers, business owners and just plain folk, Fire Island is skirting most of the damage being inflicted on the rest of the world. Actual cases of the disease here on the island have been few with no reported deaths, but damage to the commercial sectors is ongoing. Presently, most retail stores are back open and restaurants now provide outdoor dining with limited indoor dining as well. Masks are required and social distancing encouraged as much as possible in our crowded communities.

THE FIJI’S OF FIRE ISLAND

The first documented pandemic on Fire Island was one not of its own making. Early September 1892, the steamship “Normannia” from Hamburg, Germany, arrived off New York with five passengers sick with cholera, and with another four already dead. Cholera, caused by bacteria, is a particularly deadly infectious disease with a mortality rate approaching 70 percent. To protect the public the ship was ordered to quarantine in lower New York harbor.

Then, to ensure the health of the remaining 600 or so passengers who showed no signs of illness, it was decided to transfer them to a sanctuary ashore. In a quick, secret, closed-door meeting, New York’s Governor Roswell P. Flower purchased the Surf Hotel, located near Democrat Point, Fire Island, as the location for quarantining the passengers.

However, the proceedings of that secret meeting were leaked to the public and the shellfish, fishing, and charter boat industries in the Great South Bay area took an immediate economic hit as existing commercial contracts were cancelled. A purported 5,000-6,000 jobs from Babylon to Patchogue were in jeopardy.

Islip Town officials filed an injunction to prevent the ship from landing on Fire Island, and ordered 20 armed constables to enforce the injunction, but the following day the NYS Supreme Court vacated that injunction.

Meanwhile, some passengers on the “Normannia” had been transferred to a smaller vessel, the “Cepheus,” with directions to land them at the hotel’s dock. Some baymen attempted to burn down the Surf Hotel and when the “Cepheus” arrived the following day it was met by an angry mob. The heavily-armed crowd of 300-400 refused to let the ship dock.

In response Gov. Flower called out the 13th and 69th Army regiments as well as some naval reserves to quell the rebellion and facilitate the landing of the desperate passengers. After several days of skirmishes, the government forces were able to ensconce the passengers safely in the hotel. After three weeks of quarantine, with no new cases of cholera developing, the anticipated epidemic never materialized and the passengers were released to return to their normal, everyday lives.

In the Oct. 1, 1892, edition of Illustrated American, an article, entitled “The Fijis of Fire Island” reported the incident as follows: “Panic took possession of the inhabitants of Islip, Bay Shore, and Babylon and drove them insane temporarily. That is the best excuse that can be made for their heartless, brutal cruelty… [T]hey were ignorant savages. Such acts as theirs are committed by barbarians in China and the South Seas…Their behavior was a disgrace not only to American manhood, but to civilization.” (Keep in mind this article was published over 125 years ago, hence some language would not be acceptable by today’s standards.)

The next pandemic that landed on Fire Island shores occurred in 1926, amid an outbreak of poliomyelitis. In response the New York Rotary Club established a camp for children stricken with polio and called it Camp Cheerful. Each year more than 300 youngsters from NYC were cared for there at the expense of the Rotary Club. Every two and half weeks a new group would arrive to take advantage of Fire Island’s fresh air, salt water and sandy beaches with hopes of helping to heal the afflicted. Unfortunately, after only 12 years of operation the camp was destroyed by the hurricane of 1938, and was never rebuilt.

However that was not the end of it. Oral history accounts from Fire Island indicate that families in the New York City area increasingly sought refuge from the threat of polio outbreaks during the hot summer months, contributing to the emergence of the Fire Island communities in the early 20th century. The trend continued long after medical researcher Jonas Salk developed a vaccine in 1955.

But no pandemic devastated Fire Island more than the HIV/AIDS epidemic that decimated the gay populations of Cherry Grove and the Fire Island Pines.

In the late 1970s, the Stonewall riots were already a decade old. The LGBTQ community was filled with pride, and their lifestyle was slowly gaining more public acceptance. The Grove and the Pines seemed like paradise. There was disco dancing, costumed carousing, a tea party every afternoon, and a pool party every night – all night.

Then the party ended like the curtain coming down mid-show. In 1980, one of the first cases in the U.S. occurred in the Pines when all the gay men sharing a house came down with some mysterious disease and died within weeks of each other. The disease was unknown and nameless.

Friends started dying – one weekend they were out on the dance floor, the next week there was a for sale sign in their front yard. If you called and learned that a phone had been disconnected you did not wonder why. It was a plague that no one wanted to talk about.

In 1981, The New York Times published the first article that detailed the extent of the epidemic, pointing to gay sex as the method of transmission. The reality of the situation could no longer be ignored. A “gay cancer” had come for a visit with no signs of leaving.

The Centers for Disease Control recognized a disease pattern that was killing gay men in LA and NY and called it AIDS, an acronym for Acquired Immune Deficiency Syndrome. AIDS itself does not kill, but a weakened immune system allows infectious diseases to attack the body, usually with deadly consequences.

Scientists in both the U.S. and Europe were searching for the causes of the disease and in 1985, jointly discovered the virus responsible. They named it the Human Immunodeficiency Virus (HIV). Re- search continued, the doctors now searching for cures. First there was AZT, then the HAART cocktail of pills and finally in 1997, a pill that prevented infections in 90 percent of gay men became available.

However it was not a pill that saved Fire Island’s gay communities. The lesbian sisterhood stepped up and assumed less conventional roles. In 1996, an article in the New York Times indicated that firefighters in the Cherry Grove Fire Department were predominately female at that time. They lived alongside the men who were dying, marched with them, and refused to allow policy makers to marginalize the horrific disease. Compassion and inclusivity is what made the once ravaged Fire Island communities more resilient than ever. AIDS is still with us, but regarded as a condition that can be managed with proper treatment.

That was then, and this is now. A new pandemic, COVID-19, haunts us and some things will never be the same. But life goes on. Celebrate by doing the right thing – wear your mask, maintain social distancing, and wash your hands – often.