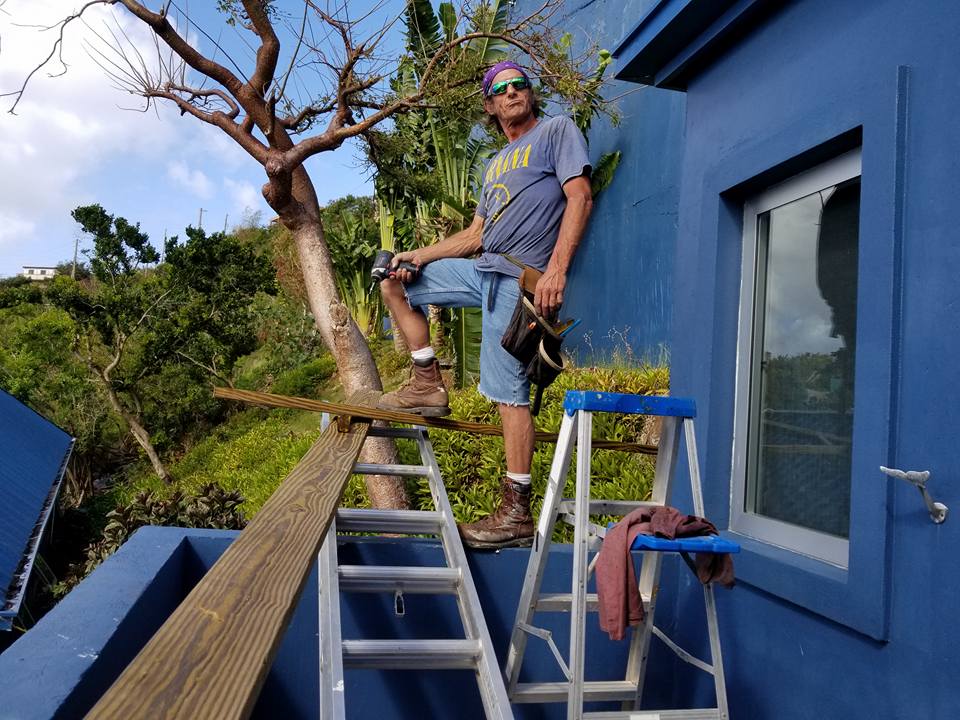 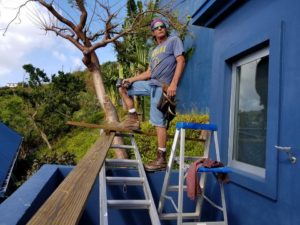 Chuck Rideout on the job in St. John. (Photo by Timothy O’Rourke)

As the United States Virgin Islands faced devastation from hurricanes Irma and Maria, residents from Fire Island, who know the importance of community in the wake of destruction, headed to the island of St. John, helping friends from their past.

The smallest of the Virgin Islands, St. John has strong ties to Fire Island, prompting a group of residents skilled in carpentry to head south and begin the long road of rebuilding. Among those who went was Chuck Rideout. “The Fire Island connection,” explained Rideout, “these are friends of my past.” It was an easy decision for him to go to St. John. He had the skills they needed, and after seeing how his own community came together during Superstorm Sandy, he knew it was time to pay it forward.

The two islands have a longstanding history with St. John serving as an escape for Fire Island residents not ready to give up their summer paradise. “The common thread is the true love of pristine beaches, ocean views, and laid back individual creative vibes,” said Randi Bailes, a former Fire Island resident and current St. John resident. “Many famous Ocean Beach bartenders went down in the ‘80s. There had been a pipeline of seasonal workers who became full-time St. Johnians for many years,” Bailes added.

Bailes experienced first hand wreckage from the two category five storms. “I lost half my roof,” explained Bailes, recounting the toll the hurricanes took on her home. “Then the rain from Maria caused molds and water damage to the structures with no roofs. We lived with leaks and roof tarps for months. The entire island became one huge construction site.”

“Once I got down there the devastation was pretty obvious,” Rideout said, as he spoke of his experiences working on the island. “I’d say 100 percent, every structure on the island had some or total roof loss,” Rideout continued, describing the view of St. John as his plane descended onto the island. Rideout also talked of sailboats littering the hillsides and wind damage far worse than anything he had experienced.

“St. John was incredible in its recovery. That’s due to a passionate desire that the St. John community has for resilience. It’s very similar to what Fire Island had with Superstorm Sandy. It takes hard work and a close, close community of everyone doing their best to help each other,” Bailes said.

Things are starting to look up for St. John as building continues and tourism starts to return. Offering some insight on how to help, Bailes’ message to the Fire Island community – “A healthy tourist season would be great. Fire Island residents should visit. Take your vacation on St. John. Everyone wants to feel normal again.” But most importantly she stated, “I suppose just knowing our Fire Island friends are close by and ready to help makes a big difference.”

Despite the growing optimism, there is still a lot of work to be done. Rideout explained he plans to return to St. John this fall and begin another round of building efforts.

“If you can’t come down there to move debris and drive nails, then support the groups that are helping out,” Rideout said. “Support FEMA, Catholic Charities, and your Red Cross – support everyone that’s down there.”