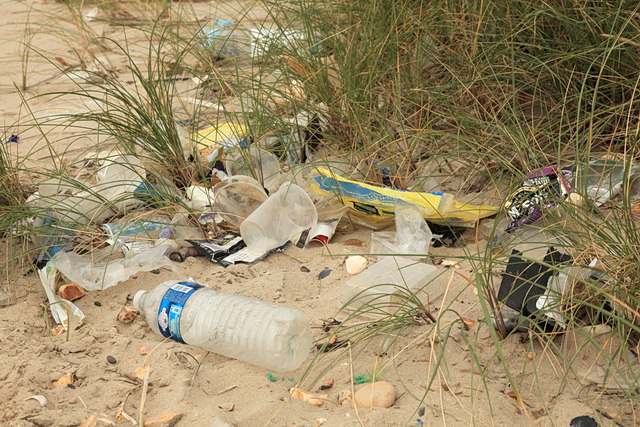 Three cheers to the Suffolk County Legislature for recently passing a set of measures aimed at restricting the use of plastic – that substance that has polluted the planet.

“The scale of the worldwide single-use plastics problem has become an ever-increasing threat to our environment and everything that relies on it, including human health,” said Legislator Hahn, after the legislature’s passage on April 9 of a sweeping package of regulations on plastic. “The plastics crisis is more urgent than people realize, and today we as a county have taken action to address the challenges posed by these dangerous pollutants. It is my hope that our action will spur other leaders to take a bold stand against expediency in favor of sustainability.”

The measures include: prohibiting eateries from providing cups, containers, trays and other disposable items made of polystyrene – commonly referred to as Styrofoam; outlawing plastic straws and stirrers in favor of biodegradable alternatives; barring the sale in Suffolk of polystyrene packing materials (including those commonly used Styrofoam “peanuts”); and prohibiting county park concessionaires from distributing single-use cups, utensils or straws made from non-biodegradable substances.

Suffolk County Executive Steve Bellone signed all the bills into law on April 26.

The measures of Hahn, of Setauket, codify recommendations of the county’s Single-Use Plastic Reduction Task Force, which she leads. She is also chairwoman of the legislature’s Environment, Planning and Agriculture Committee. And she is the legislature’s Democratic majority leader.

The Earth Day Network said online about Earth Day 2019 that human beings have “upset the balance of nature.” The plastics deluge is a prime example.

Hahn cites research of the Ocean Conservancy finding that “every year 8 million metric tons of plastics enter our ocean on top of the estimated 150 million metric tons that currently circulate in our marine environments. As a result, ingested plastic has been found in more than 60 percent of all seabirds and in 100 percent of sea turtles species. While this has been devastating to marine life and ocean ecosystems, the impacts of plastic and, in particular, polystyrene are also a tangible threat to human health. The World Health Organization classifies styrene as a probable human carcinogen and the Environmental Protection Agency says the polystyrene manufacturing process is the fifth largest creator of hazardous waste in the United States.”

Furthermore, says Hahn, “In recent years, minute micro-plastics and fibers, measuring the width of a human hair or far less, have been found in an extraordinary range of products, such as honey and sugar, shellfish, bottled and tap water, beer, processed foods, table salt and soft drinks, which means that just like the sea turtles and birds, we humans are ingesting plastic virtually every day.”

The Suffolk Legislature has a long history of environmental initiatives.

In 1988 it enacted a ban on Styrofoam by supermarkets and fast-food restaurants to protect air quality and groundwater from the “hazards and toxicity” associated with its disposal. I watched as executives
from the fast-food and plastics industries paraded before the legislature denying any harm from plastic. Indeed, it was two decades before, in the 1967 movie “The Graduate,” that a family friend advises young Benjamin Braddock: “There is a great future in plastics. Think about it. Will you think about it?”

The 1988 Suffolk ban was overturned on a technical issue. “It’s been 30 years since Suffolk first sounded the alarm on the dangers of single-use plastic,” comments Hahn. “During those three decades not a single piece of plastic has biodegraded. We must … reduce use or now suffer the consequences for generations to come.”

As the years have passed, Suffolk, the nation and the world have “thought about” plastics and there’s a growing conclusion that there’s no “great future” for this substance that litters the Earth and is a serious threat to people’s health and other forms of life.

Suffolk has been in the forefront of environmental action from programs to preserve farmland to the fight against plastics to the successful battle to stop the placement here of nuclear power plants. The Long Island History Journal in 2011 ran an extensive article that in its title described Suffolk as a “National Leader in Environmental Initiatives.” It cited among other accomplishments the enactment in 1970 of a “groundbreaking” Suffolk County Environmental Bill of Rights that “made environmental conservation an objective for the county.”