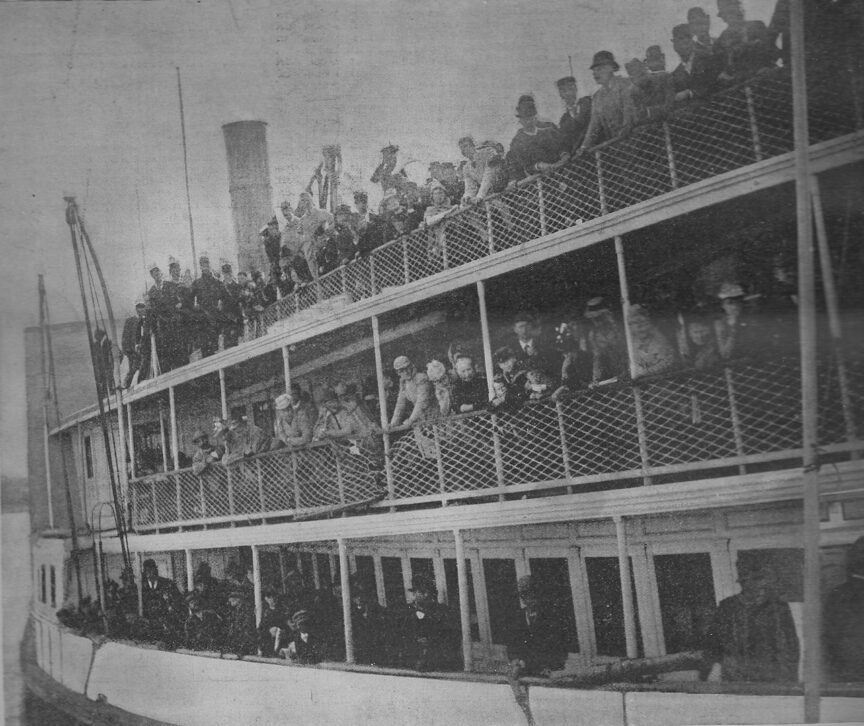 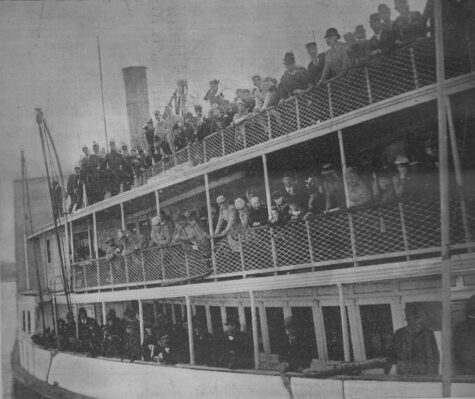 This photo, originally published in Harper’s Weekly, is hard evidence of the plight those immigrant passengers faced during what would be remembered as a dark chapter in Fire Island’s history.

By Shoshanna McCollum ~ Tourism ocean liners presently quarantined in seaports as the coronavirus spreads have been in the news much these days, and with one newlywed couple from Blue Point on board the “Diamond Princess” among 300 Americans recently evacuated from that vessel, who will presently remain in isolation a while longer still before their return to Long Island, this global story has hit home.

Alas since the days of Black Death, plague ships are nothing new, and few corners of the earth have been spared. Fire Island also grappled with this treacherous subject in the summer of 1892, when five transatlantic ships from Europe had passengers aboard that were stricken with cholera.

The vessels in question departed from Hamburg, Germany. Many on board were refugees from Russia fleeing the reign of Czar Alexander III. A cholera epidemic began sweeping through Russia earlier that summer, and passengers both in steerage and cabin class succumbed to the disease during their journey to seek a better life in the United States.

Late 19th century New York was adept in responding when it came to containing infectious disease, and not unlike coronavirus today, the primary tool to mitigate cholera was isolation. With notification in late August from the Hamburg-American consulate, Chief Officer of New York State Commission of Health Dr. William T. Jenkins mobilized hospital tent facilities for the infected at Hoffman Island off the coast of Staten Island.

The dilemma: what to do with hundreds of asymptomatic passengers? Federal quarantine facilities known as Camp Low in Sandy Hook, New Jersey, proved inadequate for the incoming volume. Dr. Jenkins eyed an aging hotel that just happened to be for sale on a barrier island as a possible solution to his problem – the Surf Hotel. New York Governor Roswell T. Flower approved the purchase, and proprietor David Sammis was more than happy to oblige – at a figure significantly above his asking price, with final transaction on Sept. 10, 1892, settled at $210,000 (a value of almost $60 million today when adjusting for inflation).

It was Sept. 11, when 600 healthy cabin class passengers of the “Normannia,” the largest of the five cholera ships, were transferred to a day boat called the “Cephus,” its destination Fire Island. That same day Islip Town Supervisor William H. Young pressed for a court injunction to prevent the “Cephus” from making the scheduled landing. He was supported by the Town of Islip Board of Health, as well as local baymen who feared their livelihoods were at risk when oyster houses abruptly cancelled standing orders, as news quickly circulated about the hotel’s expected guests. It did not take long for the fishermen to turn vigilante, and they began crossing the bay in their small boats armed with clubs and shotguns as they took it upon themselves to make sure the injunction was enforced.

What should have been a trip of several hours for the “Cephus” ended up taking nearly three days in an over-crowed vessel that lacked sleeping accommodations or adequate food provisions. Mischief caused by the mob surrounding the Surf Hotel further aggravated the situation as they shouted taunts like “go back the Europe,” while refusing to allow passengers that included women and children to disembark.

In response to such brash defiance Governor Flower dispatched several infantry regiments as well as naval reserves to keep the peace and provide safe escort for the passengers that were in his charge. The injunction was dissolved by a higher court within 48 hours, ruling that New York State’s authority prevailed over the Town in matters of public health. Shortly thereafter the mobs dispersed without further incident. William Young left his office as town supervisor the following year.

Surf Hotel would continue to serve as a quarantine headquarters for remaining infected ships coming to port until early October, as incidents of outbreak declined. Only two documented cases of illness were reported on Fire Island during operation of the Surf Hotel as a quarantine facility, and those ultimately turned out not to be cholera at all.

Not unlike the “Diamond Princess,” the story of the “Cephus” became news headlines around the world. Harper’s Weekly correspondent Casper Whitney, who rode alongside passengers of the “Cephus,” is how we know so much about what transpired. However, sympathetic as Whitney may have been for what the passengers endured, he also wrote, “Let there be a suspension of immigration,” in the closing of his essay.

All plagues eventually run their course, but how society responds in the face of the crisis is remembered for generations to come – so while caution is a necessity, compassion is an absolute must.

Editor’s Note: The book “Fire Island’s Surf Hotel and other Hostelries on Fire Island Beaches in the Nineteenth Century” by Harry W. Havemeyer is among the sources referenced for the preparation of this article. We highly recommend it for the Fire Island and South Shore Long Island history enthusiast.