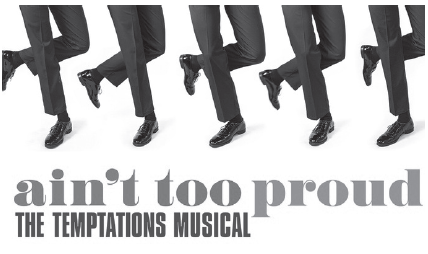 “Ain’t Too Proud – The Life and Times of the Temptations” 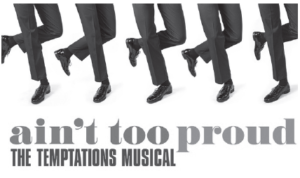 “Ain’t Too Proud” tells the story of the five original members of The Temptations, an R&B group whose heyday was the 1960s and 1970s. From their beginnings on the streets of Detroit to their induction into the Rock & Roll Hall of Fame, The Temptations had 42 top 10 hits, with 14 number one hits for Motown Records.

All five men who portray the legendary music group have the vocal power, range and the slick moves to create a dynamic ensemble. They are: Derrick Baskin, as Otis Williams (the only still living original member of the group); James Harkness, as Paul Williams; Jawan M. Jackson, as Melvin Franklin; Ephraim Sykes, as David Ruffin; and Jeremy Pope (who has left the show, due to other commitments and has been replaced by Jelani Remy) as Eddie Kendricks.

Though this is another jukebox musical, with a serviceable book by Dominque Morriseau, it is the music of The Temptations, along with the direction and the stunning choreography, that really drive the show. Director Des MacAnuff and Choreographer Sergio Trujillo, who worked together on the Tony Award winning “Jersey Boys,” keep the action moving at a brisk pace. 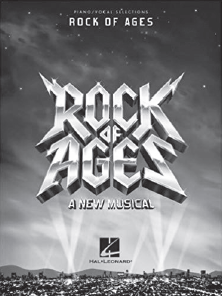 “Rock of Ages” is celebrating its 10th anniversary with a revival, in the same theatre where it all began, New World Stages. It then moved to Broadway and earned five Tony Award nominations and ran for nearly six years from April 2009 to January 2015. It was a fun theatrical experience that featured classic ‘80’s rock songs and a first-rate cast that included Constantine Maroulis as Drew, who was nominated for a Tony for Best Actor in a musical; Kelli Barrett as Sherrie (Off Broadway), and Amy Spanger as Sherrie (Broadway); Paul Schoeffler as Hertz; Lauren Molina as Regina; Will Swenson as Stacey Jaxx (Off Broadway) and James Carpinello (Broadway); Wesley Taylor as Franz, for which he won a Theatre World Award for Best Off Broadway debut performance; and Mitchell Jarvis as Lonnie, who is recreating his performance for this production. In the Broadway production, Jeremy Jordan was a swing and understudy.

“Rock of Ages” is a jukebox musical featuring ‘80s rock songs of, among others, Pat Benatar, Foreigner, Bon Jovi, Twisted Sister, Styx and Journey, and tells the story of a “small town girl” who has traveled to the Sunset Strip to be a actress, and Drew, a “city boy” who is a wannabe rock singer. They fall on the rocky road of love. Together, with their friends, they try to stop the bar, the Bourbon Room, from being torn down by a German real estate developer and his son, who are trying to clean up the Strip.

This production has a fifth rate, untalented cast who cannot make their characters believable. Jarvis, who tends to ham things up, has now gone so far over the top, to the point where nothing can reign him in. The music is now eardrum splitting, super loud and the harsh strobe lighting is blinding. The book by Chris D’Arienzo, not much of one to begin with, now gets totally lost. Even the horrible 2012 film version starring Tom Cruise is better than this, and that is saying a lot. This is an overproduced, way over the top, over-amplified mess.