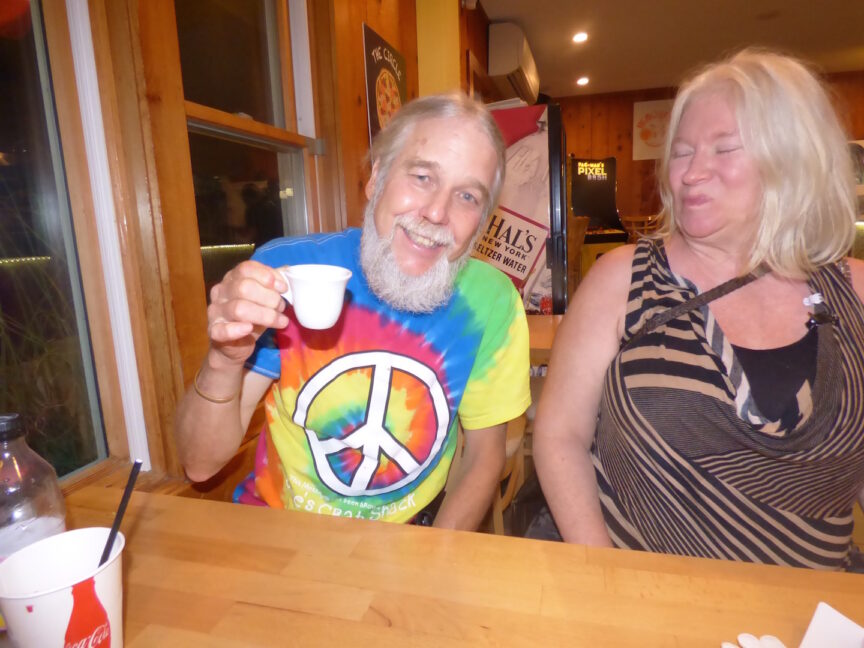 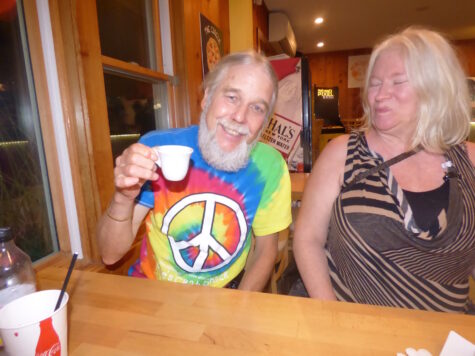 The corner of Bay and Evergreen Walk has been a pizza place for as long as this reviewer can remember in her Fire Island life. One was there for decades and much beloved, and sorely missed when it shut its doors. Other incarnations followed, but never really quite took hold, leaving uncertainty in its wake. We are pleased to announce casual family dining has made a comeback in Ocean Beach.

Upon entering the space with neat rows of blonde wood tables and chairs, one of the first things that struck us was how immaculately clean the Beacheria was. That’s always a good sign. Next thing we noted on this weeknight were the diners around us. Vacationers with kids, locals having supper with friends after a day’s work – this too was a positive vibe.

It was a beautiful summer night dining with my husband in Ocean Beach. Then walked in a random element – in this case Lauren Stevens, illustrator for this publication, who before we knew it was sitting down to join us. With Lauren there suddenly a quiet dinner for two became a jovial celebration as animated as one of her art works, and since Fire Island is all about spontaneity, we feasted! 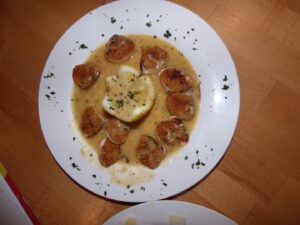 Our appetizers read like a cornucopia of Italian style treats, and we were very busy sampling from each other’s plates. I tried the grilled artichoke hearts. For those who love artichokes, prepared to be blown away. Nothing pickled in heavy oil here. These fresh long-stemmed morsels were cooked on the grill with a nice smoky flavor, topped with shredded Parmesan and a hint of sea salt. Food of the gods! A respect for fresh vegetables also resonated in the spinach roll that my husband, John, was nibbling on. It was spinach and broccoli actually, with fresh ricotta and a marinara dipping sauce. This could be a meal in itself as a tasty late night snack, or a nice lunch paired with their soup of the day.

Lauren insisted that we also get a classic regular slice of pizza, and she had a point. This is a staple item of establishments such as this, so we had the try it. Our gracious host served it to us cut into thirds with razor precision. Such attention also was paid to the preparation of the pizza itself: the crust was crisp and light, the marinara sauce sweet with tomatoes, the mozzarella satisfying. With the bedrock slice clearly under control, some of their mouthwatering specialty pizzas should be a slam-dunk. Fra Diavolo pizza for those who like it spicy, vegetable pizza for those who choose to go meatless, and everything pizza for those who want it all! Beacheria also offers gluten-free and cauliflower crust pizzas on request, and those accommodations are increasingly important. 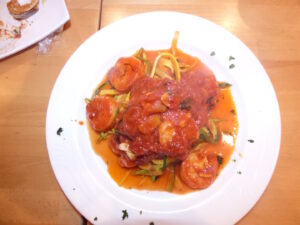 For entrees my husband ordered the chicken marsala, while I tried the zucchini marinara with shrimp. Not unlike the pizza, chicken marsala is kind of a barometer dish to gauge the quality of a pizza restaurant, and once again Beacheria cleared that hurdle with ease. The savory marsala wine and mushroom sauce was the perfect marriage of flavor, topping pasta cooked al dente, and a tender white meat chicken cutlet. My zucchini dish also got high marks. For those who have not tried zucchini noodles yet (sometimes called zoodles), what are you waiting for? Again the respect for vegetables shined through as the squash noodles were lightly steamed, but not overcooked. Paired off with that amazing marinara red sauce and substantially sized shrimp, this was a winner choice. Again gluten-free and whole wheat pastas are available upon request.

Getting pretty full at this point, we still made room for dessert – tiramisu and three spoons, and cups of espresso all the way around. Every neighborhood needs a place where a decent cup of espresso is available, so consider yourself advised you can get one here. The tiramisu was pure ambrosia, and next time we will have to try the twin cannoli.

Catering is available for those important family or business functions. Beacheria also delivers to the neighboring communities seven days a week, and is open late nights.

As the proprietor said to us, it should be all about the food. However, courteous service, a pleasant atmosphere, and reasonable prices point to the fact that this place is about so much more.