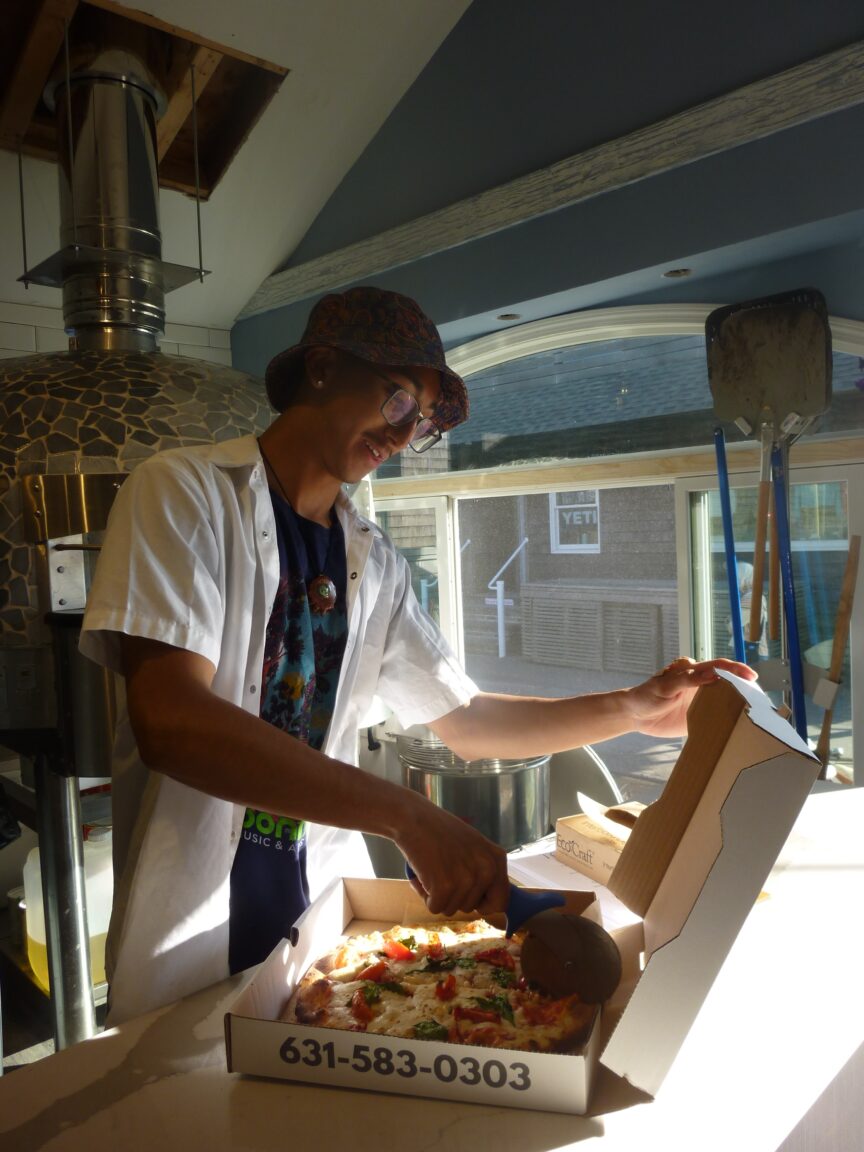 Mermaid Market is rebranding as Dockside. They still make wonderful deli sandwiches, and Helen and Travis are still there to greet you with a smile – nevertheless the place has a new look and expanded services. Delivery of their state-of-theart pizza oven was the talk of the town a few weeks ago, and the chatter not only lived up to the hype, but exceeded expectations.

Mermaid Market has been a fixture on the northeast corner of Bay and Ocean Breeze walks for more than 20 years. It is the place workers get their coffee and egg on a roll when they get off the ferry in the morning, pick up the Sunday paper and lotto tickets on the weekends, and all the other good things that neighborhood delis offer that make them special. Young entrepreneur Travis D’Arienzo purchased the franchise four years ago, and stayed true to the business model, while slowly making improvements upon it.

This spring he started to make intense renovations to the place, and the difference is striking. What once existed as a cramped bodega style-establishment is open and roomy, in soothing colors of grayblue and white. Then there is the pizza oven. “We saw it at a trade show in Atlanta and knew we had to have it,” said D’Arienzo proudly.

The oven is a beautiful object, functionally designed in ceramic mosaic. In most pizza joints you expect a wave of heat upon entering the establishment, but not in this case. “It’s low heat and fast cooking,” explained Travis’s assistant Gio, who was molding the pie I ordered. No slices here, they make you what is called a “personal pie.” This guarantees freshness, as well as control over your pizza destiny. Ever walk into a pizza place only to be told they just sold their last slice of pepperoni? Won’t happen here. On the subject of toppings and choices, here is just a sampling: Red or vodka sauce; mozzarella, feta, or goat cheese; olives, pineapple, or arugula; meatball, bacon or chicken; truffle oil, balsamic glaze, or boom boom sauce – whatever that is!

“Okay it’s ready,” said Gio. What? I had only been here a few minutes. I’ve had slices reheated at many pizza shops that take longer than that. Then it was time for cashier Emma to ring me up. My jaw dropped, but not for the reason you may think. I was certain an error had been made, and that Emma undercharged me. “Nope, that’s the price!” she said.

Now usually in these food reviews, there is a money shot showing you the tempting entrée. Unfortunately, my husband and I dug into the pizza way too fast for that to happen once I got it home – I tried to take a nice picture of my cat with the empty pizza box, but he refused to hold still.

If you are expecting a greasy belly bomb, this is not the pizza for you. Dockside’s creation is light as a feather, and really satisfies. The crust is reminiscent of some exotic Indian breads in its flavor and body. I was told on the street that their gluten-free cauliflower crust is also amazing; I will try it next time – and there will be a next time.

“All our sauces and dough are made here fresh on the premises every day,” added Travis, every bit the young businessman that he is. But of course I’ve known his high standards of quality for years, and would not have expected less. He has built a solid reputation with the sandwiches and fixings that have been feeding Fire Islanders since 2015. Back to those sandwiches: The Boujee Brooklyn – grilled chicken, craisins, goat cheese lettuce balsamic on a wrap; Munster Smash – roast beef, Munster cheese, tomato horseradish mayo on a Kaiser roll; Lobster Roll – say no more.

The refrigerator case also offers an interesting choice of soft drinks and craft beers, including a selection of Montauk Brewing Company’s ale, IPA and pilsner beers. And yes, there are chips, bagels, muffins, and all the other good stuff that Mermaid Market has always been known for – except now we will know it as Dockside.