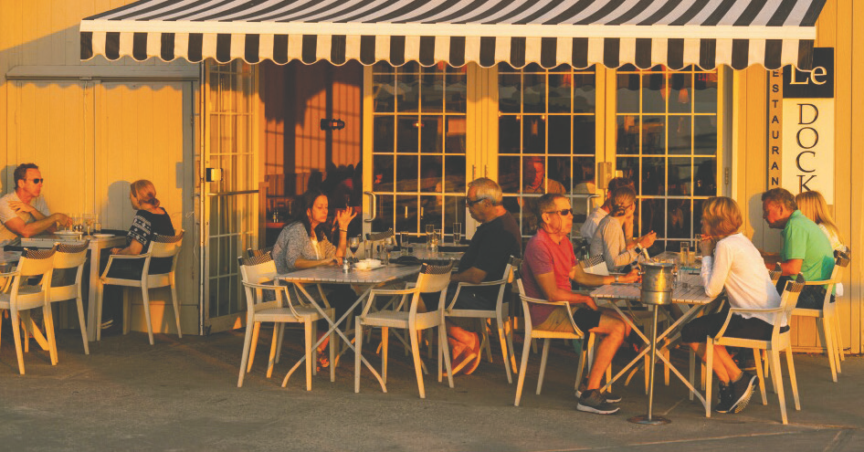 Sir Isaac Newton famously stated, “An object at rest stays at rest and an object in motion stays in motion with the same speed and in the same direction unless acted upon by an unbalanced force.”

In this case the lone Fair Harbor restaurant space we all know as Le Dock is the object at rest. It has stood there for decades, as different proprietors have come and gone. Our friend Michael Miller would be the object in motion. Mike is no stranger to us at the paper – he is a beloved Fire Island fixture, having operated the Ocean Beach family style Italian dining establishment known as Michael’s Ristorante & Pizzeria for over two decades. An abrupt change in personal life circumstances veered him off course, prompting him to shutter the doors of his business after 2016. His presence has been sorely missed.

“I light up when I see friends from Ocean Beach and Seaview making the trip to see me,” said Miller. Sales Associate Beth Errico and I sitting at one of his tables was testament to this fact, as were a few other familiar faces we saw trickle in that evening.

Besides the personal connection, Mike and his partners, Lance Natsch and Russell LeScala, also are different from former Le Dock operators – they own the building. This is huge. As building owners, Mike, Lance and Russell have a lot more control over the destiny of that space. It has to be said that for years Le Dock has been struggling with a septic issue that has been a detriment for prior restaurant managers, whose hands were tied as building tenants. Today that problem is officially over, and this time it really is a new beginning.

“I told Megan Wallace I was interested in purchasing a commercial space,” explained Miller. “When she told me Le Dock was available it felt so right, I knew the past 24 years had been grooming me for this … now look, I have outdoor seating! Do you remember all the times the Ocean Beach village trustees denied my requests for outdoor seating?”

Miller proudly showed us around. He and his partners now run the liquor store as well. In fact romantic private seatings can be arranged after liquor store hours, by reservation only. They also own and operate the small pizzeria in the rear – and since Mike knows pizza well, that too is a slam-dunk.

The fine sauces and recipes you will remember from the old Michael’s, but Le Dock is about so much more. Le Dock Head Chef Gary Garfield, who is a Culinary French Institute graduate as well as a veteran of fine dining on Fire Island, also took some time to speak with us.

“Our menu is a combination of Italian, American, and Tex-Mex. We also have vegan dishes, because that’s important, as well as a children’s menu. This mix and blend has helped us exceed all numbers and expectations. We had 100 dinner reservations last Sunday.”

Chef Gary’s arugula and watermelon salad with ricotta balsamic and lime is still vivid in my mind as I write this. I agreed to give Beth a taste, but frankly I did not want to share, it was that good.

Beth being more generous in spirit, insisted that I try the special of the day that she ordered – crab stuffed shrimp with pasta. I love crab stuffed shrimp, but a restaurant on Derby Street in Salem, Massachusetts, that I knew decades ago kind of spoiled me – they made it so well that I could never find its equivalent – until today. Scrumptious!

Another specialty of Le Dock is the stone crabs, served with Miami-style mustard sauce. With a direct connection to the “Anna Mary,” a fishing vessel out of Montauk, these crabs are sustainably harvested, with only one claw cut off. The crab is returned to the water alive, where it will re-grow another. We all love our shellfish, but colony collapse in our waters is a tragic thing. This concept is one way to address it, without sacrificing good eating or the livelihood of Long Island fishermen.

For dessert Beth and I shared the Heavenly Chocolate Sundae, aptly named, with vanilla ice cream, caramel sauce, and whipped cream on a brownie. We were sorry the Key Lime Semifreddo was no longer available, but items made fresh daily means sometimes favorite dishes sell out – all the more reason we will have to make the journey again.