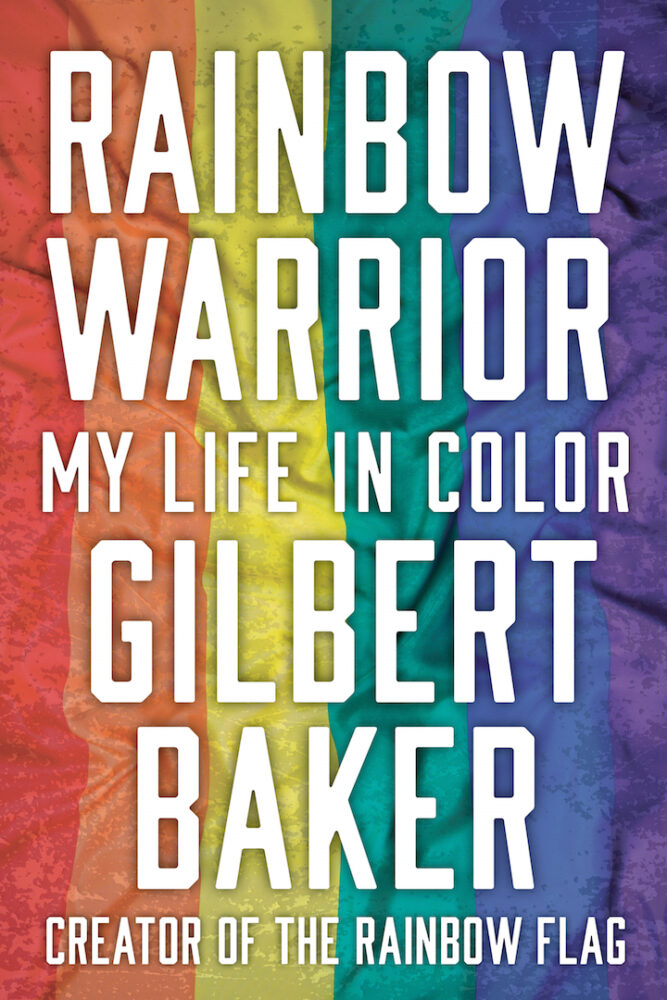 “Rainbow Warrior My Life in Color” 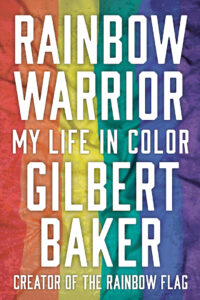 “Rainbow Warrior” is no misnomer. Gilbert Baker persevered through a repressive Kansas childhood and recurring depressions. In 1994, he took on Mayor Rudy Giuliani to carry his mile long rainbow flag up Fifth Avenue past St. Patrick’s Cathedral in commemoration of the 25th anniversary of the Stonewall uprising.

Audacious and amiable, he tells folks, “I am Dorothy,” when they find out he’s from Kansas and ask if he knew her. Detailing in equal measure his fears (an Army drill sergeant who made his life hell) and his pleasures (sex, drugs, and sequins), Baker lived his life large and holds nothing back. Early on he tells readers he was “born gay and always knew it.” His parents wanted him to “just be normal,” but for his 15th birthday Baker wanted a “strapless ball gown in taffeta and tulle.”

The man knew how to dress. For the launch of the rainbow flags (there were two originally) on that momentous June 25, 1978, at San Francisco’s Gay Freedom Day Parade, he wore 20 yards of bias-cut white silk to blow in the wind, a red velvet drape over one shoulder, and Lucite high-heeled sandals on his feet. He had a fine straight nose, long hair and a beard. “It was Glamour Jesus all the way.” Jesus gay? Baker believes “he might have been.”

Working closely with his friend Harvey Milk (it was he who coined the word homophobia), they decided they needed a symbol for the gay community, one that would be an antithesis to the pink triangle gays were forced to wear in Nazi Germany. Inspired by the 1976 bicentennial, the “orgy of bunting and hoopla,” and the extravaganza of American flags everywhere, Baker experienced flags in a new way. They had power and a “transcendent, transformational quality.” A gay nation, he thought, “should have a flag too, to proclaim its own idea of power.” That the flag should be a rainbow of colors was a conscious choice, a symbol of hope that Baker traces back to the book of Genesis where a rainbow appears as “proof of a covenant between God and all living creatures.”

But Baker didn’t just run up some colorful bands of fabric on his Singer (a friend taught him to sew) and hoist the flags; the flags took time.

The flags took bales of raw Chinese muslin that had to be cut and washed in gallons of organic detergents to get out the sizing, the stiffening in fabric that gives it a starched feel. (They collared entire laundromats to get the job done.) The flags took dyeing solution, salt and ash to set the dye. Baker and his happy band of vexillographers (formal for flag-makers) drove around the city in the dead of night looking for empty laundromats where they could ignore the “no dyeing” signs, and have their way with the machines. Then the fabric had to be hand ironed to get out the creases from the dryers. All this before the actual flag-making could even begin. “The gay Betsy Ross,” Baker dubbed himself.

Irreverent, funny, and from the heart, Baker brings you into San Francisco’s gay world of the ‘70s and ‘80s, his development as a visual artist and set designer, his commissions that ranged from tacky straight strip clubs to the inauguration of Dianne Feinstein as mayor of the city.

Readers will be privy to the infighting within the close LGBTQ community (do not mess with The Sisters of Perpetual Indulgence), his big-hearted friends and those easily offended, his lovers, the breakups and makeups. The book covers the dark era of AIDS, his work on the AIDS Memorial quilt with his friend and fellow activist, Cleve Jones. And if readers weren’t present in 1994 when Baker and his cadre of volunteers marched the pride flag down Fifth Avenue past St. Patrick’s Cathedral to commemorate Stonewall 25, they will get as close to the spectacle as a printed page allows. Readers will get even closer, because Baker dishes about the dramas that almost did him in during the days preceding the march.

A parade sponsor strong-armed him into signing an agreement or the parade is a no go. Baker signed but landed in the slammer. Out, he negotiated with Giuliani who offered Eighth Avenue for the parade, then agreed to part of Fifth. Baker goes along but not for long. In a last minute, now-you-see-it-now-you-don’t, rope-a-dope maneuver involving a mile of scarf and a pair of scissors (read the book) that unfolded with the precision of a finely calibrated Swiss watch, Baker got Fifth Avenue, church included.

Gilbert Baker was a man who made a place for himself in a world that had no place for him. He writes like he sews, with ease and unbounded energy, his words like yards of fabric “peel[ing] away from the wheel at the end of the presser foot.“

Colorful photos, supplied by various sources are bright and animated, their subject matter full of interest, like Baker himself.

Editor’s Note: Gilbert Baker was a frequent presence in Cherry Grove and Fire Island, from 1993 until his death in 2017. Jay Blotcher, co-editor of this memoir, encourages readers to visit the website www.gilbertbaker.com to learn more about Gilbert’s legacy, as well as order “Rainbow Warrior My Life in Color” online. Blotcher was also co-editor of Fire Island News in the summer of 1983.