Welcome Back to Cherry Grove Summer 2017

The Grove is popping with activity early in the season. The restaurants and bars are all ready to go! Since the Fire Island News ends their season on Labor Day, I like to acknowledge that Joe Anania directed a show for the Arts Project, named “Next,” written by Terrence McNally, and featured two of our Cherry Grove celebrities, Tommy “Tush” DeMastri and Sherri Rase. It was brilliantly staged and well accepted by an enthusiastic audience. Thank you Luis Valentin, for such a beautiful set design.

Glen Dooley and Mike Marino entertained Glen’s sister and brother who both arrived on different weekends from England. Brother Gary from Cranfield, England, spent a few days in New York City touring Staten Island, the Bronx and Brooklyn before arriving in Cherry Grove. A luncheon was prepared in his honor. The guest list included Lloyd Desbrisay and Gaston Alonso (who was also celebrating his birthday), Michael Fitzgerald, Jay Robinson and me.  His sister, Gina, and her husband, Paul Mist, spent a few days in Cherry Grove before departing for Nottingham, England.

Celebrity Elvis Duran, a radio host and frequent Cherry Grove visitor, is often seen on the NBC “Today Show” where he introduces a young talented new singer. Elvis was just honored with a star on the Walk of Fame in Hollywood. He and our celebrity bartender Johnny Pool recently returned from a Mexican vacation.

We have another celebrity living in Cherry Grove. I call him the “fashionista” George Brescia who appears frequently on various talk shows. He recently appeared on NBC Live, discussing the fashions at the annual Anna Wintour Gala at the Metropolitan Museum of Art.

World-famous comedian Wanda Sykes, who is a property owner and our neighbor in Cherry Grove, has just completed a new film “Snatched,” which also stars Goldie Hawn and Amy Schumer. Wanda appeared on the Ellen DeGeneres show and also on “The View” to promote this film and her upcoming talk/game show.

Welcome Dick Webster back to the Grove, he is now recovering from two heart operations this past winter. He and his long-time partner Warren Boyd Wexler are among the few year-round Cherry Grove residents.

The first Gay History Museum in Houston, Texas, will be opening shortly. Warren Boyd Wexler was asked to provide some of his photographs of the original Stonewall riot and the first Gay Pride Parade in New York City that he attended. He will also be showing his photographs along with artwork by Dan Evans, Michael Fitzgerald and Susan Ann Thornton among other talented locals who will be participating in Artist Tour Cherry Grove on June 10 and 11.

Philomena (aka Philip Stoehr), a former Empress of the Imperial Court of New York and a former Cherry Grove Homecoming Queen, as well as Cherry Grove celebrity who has appeared in many Arts Project shows, is now a dresser on Broadway with the show “Waitress.”  On April 24 and 25 the Easter Bonnet, produced by Broadway Cares/Equity Fights Aids, had its annual fundraiser. Philomena designed and wore the Easter Bonnet that represented her show, and I congratulated her.

The Arts Project had its annual “Out-of-Town-In-Town-Party” in Ft. Lauderdale on Feb. 26, to celebrate Cherry Grove in Florida. After the luncheon, Parker Sargent featured his film “The Panzi Invasion” at the Gateway Theater to a sold-out house.  Everyone had a great time at both events. The Arts Project had the annual “In-Town-Party” at Bocca di Bacco in New York City – also a successful event.

Diane Romano and Patricia Goff celebrated their 5th wedding anniversary with a spectacular at their poolside/bayside home. Stephen G. Daniello of Share Chef catered the affair. More than 100 people attended, many friends from the Grove and the Pines.

The Garden Club had its first meeting this season, hosted by President Peter Chace at his home. In attendance were Mitch Volk, Richard Reilly, David Vallee, Lyn Eisenberg, Brian Clark, Irma Ruiz, Ron Cooms and Charles Mehr. The Garden Tour will be held on July 1; more details to follow…

Congratulations to Bob Lerch and Nicole on the birth of their daughter Rachel, born in December.

Bob Dixon had his annual St. Patrick’s Day Party at his oceanfront home. In the past at least 40 to 60 people were in attendance. This year due to a nor’easter Michael and I were among only 20 people who could attend. The house was overflowing with corned beef and cabbage and drinks and desserts galore.

The community would like to thank all those people who worked so hard putting together the semi-annual flea market. Thanks to the Arts Project Board, and all those who contributed, and certainly to those who bought the treasures.

Rose Levine appeared on March 23 in her acclaimed cabaret act at Pangea on Second Avenue in New York City to two sold-out performances. Rose will be performing on July 1 at the historic community house in “The Best of Times is Now.”

The annual PAWS benefit will be held this year for the first time at the Cherry Grove Community House on June 3. Doors open at 8 p.m., the show starts at 9 p.m.  Many of your favorite Cherry Grove celebrities will perform. Valerie Perez is the coordinator.

Cherry Grove says farewell to friends, neighbors and loved ones who passed over the winter: Daniel “Sweetie” Booth, Gilbert Baker, Jack Ebert, Richard Fenn, Lynn Lewis, Gerri Losquadro Senior (mother of Cherry Grove Property Owners Association President Gerri Losquadro), Bill Marino, Michael McGovern, Joyce Moyer, John Sorensen, George (Brandy) Susani and Helen Turnquest. All of them interesting people with worthwhile accomplishments. They were loved here in Cherry Grove. Debbie Reynolds may not have lived in the Grove, but she graced our theatre enough to be considered one of our own. 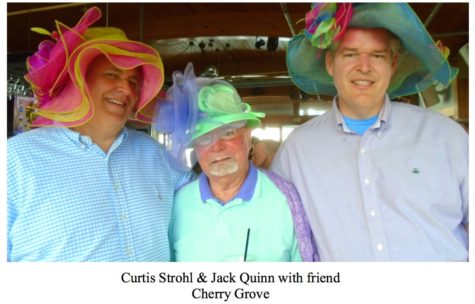 This is a message for Michael Fitzgerald. I sent that pic that I took from your deck to my sister. The first thing she commented on was your art. She’s an admirer.