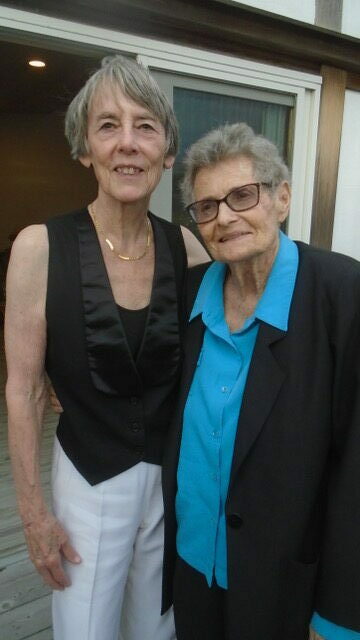 The weekend of June 8 and 9 was a weekend of recycling collectibles and treasure hunting in Cherry Grove. We had a major clean up day on Saturday June 8, with a barge that left the Grove loaded with bulk household refuse. We had two deck sales that had fabulous treasures that never left the island. We also had our annual Drag Tag Sale that was as big as Barney’s Warehouse, courtesy of The Imperial Court of New York. The place was loaded with dresses, shoes, and wigs and accessories. The traffic was light, but there were enough serious shoppers getting their outfits for the Invasion. This merchandise came from some very important retailers, only to be sold for a song.

On Friday night, June 7, the Dune Fund held their second annual silent auction, in partnership with the Artist Tour of Cherry Grove, at the Community House, to benefit the preservation of our dunes, as the Dune Fund has done for more than 55 years. Many artists who participated in the 6th Annual Artist Tour of Cherry Grove donated artwork towards the silent auction to help the cause. Susan Ann Thornton, founder of the Artist Tour, was one of the artists participating; others included W. Douglas Topper, Lorraine Michels, John Mansueto, Mark Atten, Rosanna Chinchilla, as well as videographer George Lyter, who showed us some interesting pop up films on his projector at the Community House. It was a great time, and the artists are already planning for next year.

Billy Bean is the first “out” major league baseball player. He was with the Detroit Tigers, Los Angeles Dodgers, and San Diego Padres. He and his husband, Greg Baker, recently bought a house on the bay. They had guests from Miami Beach.

Uzi Parnes and Scott Richard enjoyed having Scott’s mother, Mary Richard, as their weekend guest from Walnut Creek, California. It was her first time to the Grove, but it certainly won’t be her last. She was thrilled to be here.

Jan Felshin and Edrie Ferdun are celebrating 60 years together. A fantastic party was given in their honor at “Heaven N’ Earth,” hosted by many friends. Guests came from nearby, such as Cherry Grove and Fire Island Pines, but also from the Hamptons; Rehoboth Beach, Delaware; Arizona; Maine; London; and New York. It was a real celebration with lots of dancing – even a conga line.

Our own Greg Scarnici (a.k.a. Levonia Jenkins,) had a very successful book signing for his recent book “Dungeons and Drag Queens, Fire Island through the eyes of its worst drag queen,” a book most surely destined to become another Fire Island classic.

“The View” has been celebrating Gay Pride Month. Every day they have been featuring another gay icon. One of them was Jose Sarria. In 1962, Jose ran, as the first openly gay man, for City Council in San Francisco. In 1965, he founded The Imperial Court, which grew into a national organization, then into Canada and Mexico as well. Jose died five years ago, but he would spend every summer in Cherry Grove for at least two decades prior to his death. He was the frequent guest of the late Billie Ann Miller and Thom (Panzi) Hansen. He was lovingly known as “Mama.” We spent many, many times together.

Another Grove neighbor, Wanda Sykes, was also a guest on “The View.” She spoke about her upcoming role as the iconic Louise Jefferson in the remake of the “The Jefferson’s” with Jamie Foxx (which aired live, on May 22).

Of course the late Gilbert Baker, who designed the world famous rainbow flag, stayed in Cherry Grove during his later years. “The View” recently had a segment dedicated to him as well, showing a photo of him at the White House with President Obama. Join the discussion on June 23, at 1 p.m., at the Community House, to honor Gilbert Baker. A reading of his posthumously released book, “Rainbow Warrior,” will be held. Copies of the book will also be for sale, as Cherry Grove will one of the official stops of the title’s book tour throughout the United States.

The flagpoles and the benches have been installed on the new dock as promised. Celebrate Gay Pride in the Grove, as well as the 50th Anniversary of Stonewall, on Saturday, June 22. Cherry Grove’s Parade begins in town at 2 p.m., with a dance at the Community House at 8 p.m., followed by fireworks from the bay at 9:30 p.m.

Todd Joseph and Eddie Fraser presented “Lady Gay,” at the Community House on June 15, featuring a command performance by William Bailey (a.k.a. Jada Valenciaga) opening the show in a beautiful red dress and performing as a perfect Billie Holliday. William then came back on stage as himself, and was just brilliant. He had a fourpiece band and three backup singers. The entire evening was a benefit for the Northwell Clinic. Bob Dixon was a major donor. Northwell is offering a free skin cancer screening, on June 28, at their Cherry Grove office, by appointment only. Call Lisa at 631-396-6705. A second screening will take place in August.

Italy comes to Cherry Grove as CGCAI holds their Italian Street Fair fundraiser, on July 6, from 4-7 p.m. The costume contest theme is Come as your Favorite Italian. Also authentic food, wine, drinks, and a cannoli contest. After this party, come dressed as you are to the Community House to see Rose Levine in “I Gotta Be Me,” on July 6, at 8:30 p.m., with Chris Bell, director, and Mark York as musical director.

On Sunday, July 7, the 23rd annual Cherry Grove Garden Tour will be held from 11 a.m.-3 p.m. A ticket sale table will be set up in town earlier that morning. Tickets are $20, with a reception to follow. Also July 7, Bell Bottoms is the theme for bingo at the Community House at 7 p.m., with new Host Bobby Michel.