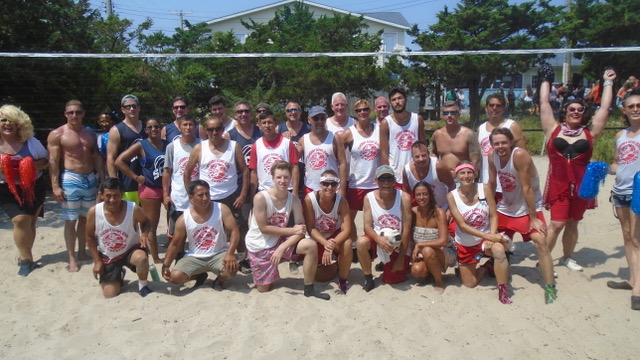 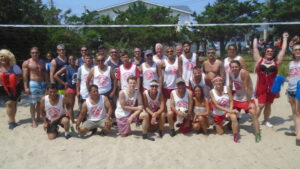 The Grovettes reign victorious once again!

I have been thinking of our neighbors and guests who have lived, visited or worked in Cherry Grove over the years. Many Broadway or Hollywood celebrities passed through. When I arrived in the Grove it was a family community of people who loved this small fishing village. It was a weekend getaway from the mainland. Some worked in the theatres on Broadway as dressers, electricians, carpenters and designers.

In the 1940s, Nancy Walker, Arlene Francis, Bertha Belmore, Oliver Smith, Donald Cook, Ralph Bellamy and his wife, Alice, would spend time here – celebrities both straight and gay. Eventually our small theatre was floated over across the bay and more would follow: Alan Prescott, Burke McHugh, Earl Blackwell, and Martin Kraft from Broadway came here and would perform.

All the local people were thrilled and participated in the shows as well. It caught on and it became the Saturday night event. The Arts Project of Cherry Grove was founded in 1948. There were still no telephones, electricity, or fancy appliances but this community was sought after for the fun and social activity.

By the 1950s, it was humming with activity. Simple themed house parties such as a hat party, high heels party, chintz, cowboy and other themes caught on. More elaborate parties would follow including MGM, Peter Pan, and other themes.

During my time here I met Richard Kiley, Milton Berle, Joan McCracken, Joe Milan, Dick Darcy and other performers who sat in the audience of our early shows.

The Monster restaurant opened and that brought people from neighboring Fire Island communities. Margaret Truman and her husband, Clifton Daniel, lived in Point O’ Woods. They had a standing reservation every Wednesday for dinner. Mel Brooks and Anne Bancroft from Lonelyville were always here, Goldie Hawkins and Ethel Merman would come from Ocean Beach, Tony Roberts and his parents, Norma and Ken, also from Ocean Beach were regulars.

We still have celebrities living here or visiting. Tommy Tune, Neil Sedaka, Billy Bean, Wanda Sykes, Terrance McNally, Elvis Duran and Isabella Rossellini all have been here – and this past weekend I met my old friend songwriter and recording artist Ari Gold, whose album “Remix to Freedom” is available online. And in the designer world friends who lived in other communities would visit me at “Roseland” including Liz Claiborne, Perry Ellis, Cathy Hardwick, Geoffrey Beene, Michael Volbrecht and Michael Kors, who still visits occasionally. I hope you enjoyed this theatrical history lesson.

The Copettes and Grovettes played their annual volleyball game on Aug. 7, with yet another win for the Grove. Porsche opened the game singing the “The Star-Spangled Banner” and then joined the four cheerleaders Davida, Stephanie, Ann Drogonie and Christie, who provided a little more fun. The Suffolk County Police Department’s Emerald Society Pipe Band also marched through town in full regalia, with their bagpipes and kilts. After the game everyone celebrated at the Ice Palace, and enjoyed a barbecue and a pool show courtesy of Porsche and the girls. This is always a great afternoon.

On Aug. 10, the Cherry Grove Arts Project presented professional comedienne Suzanne Westenhoefer. She had the audience roaring and is a true delight.

• On Saturday, Aug. 31, from 7-10 p.m., the Arts Project will present “Legends Vlll,” created and directed by Matt Baney, with a Cherry Grove all-star cast.

• The Garden Club will host their Annual Bake sale, on Sunday, Sept. l, at 11 a.m., at The Community House. Baked good donations will be graciously accepted.

• The Toga Tea party, hosted by Roland Michely and Joe Anania, at Lewis Walk, is on Sunday, Sept. 1, from 4-7 p.m. There is a donation fee at the door with Proceeds to benefit APCG.

• Joe Anania performs in his own APCG production, with a play he wrote, “Split Decision.” Barbara Grecki is the production director, and it shows for one night, Saturday, Sept. 7, at 8 p.m., at the Community House.

• Mark your calendars: Miss Fire Island will once again be held at the Ice Palace on Saturday, Sept. 7.