The Pines was in Cher-form on Saturday night, anticipating the arrival of the iconic one and only Cher. As you walked around the Harbor, you could hear Cher’s voice blasting out from each yacht that was docked in the Harbor. Even the DJ at the Blue Whale was only spinning Cher’s songs. A few Cher impersonators were parading through town in sequins, feathers, glitter, and glitz. 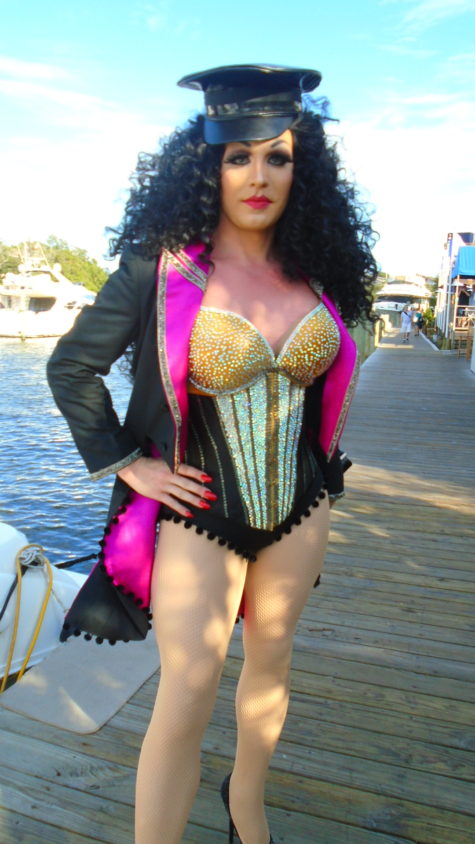 You may not know this, but the Oscar, Emmy and Grammy winning Cher has had the most number one hits in every decade since the 1950s, beating out Frank Sinatra, the Rolling Stones, and the Beatles. Around 400 people from the Grove and the Pines attended this Democratic fundraiser for Hillary Clinton, which was held at the Pines Club.

Andy Tobias opened the program, followed by Christine Quinn who introduced Cher. She spoke for 20 minutes about her life and her friends in the gay community. She realized at the age of 9 that she had gay friends. She spoke about the importance of electing Hillary and what she will mean to the gay community. “Allegiance” star, Telly Leung, also sang a moving rendition of “I am What I Am” that evening. Depending on your ticket level, you were able to take a picture with Cher and talk with her personally. It was a real Cher-a-Thon

The brilliant writer, performer, and comic Bruce Vilanch appeared at Whyte Hall on Aug. 13. He’s a comedy tour de force, who rocked the house telling stories about his various jobs in show business and the backstage experiences he had at the Tony Awards, talking about many Hollywood legends such a Deborah Kerr and Dolly Parton. They are true stories and very funny.

The Skivvies, a young group of singers and musicians performed as well, with Broadway’s Travis Kent and Max Crumm. Max was the star of the latest Broadway production of “Grease” and “Disaster.” On Aug. 20, Broadway’s favorite sister duo Ann Hampton Callaway and Liz Callaway performed “Sibling Revelry.” They entertained with non-stop excitement to a full house and a very appreciative audience.

Celebrity sightings in the Pines: Andy Cohen, Jimmy Fallon, MSNBC Correspondent Laura Haim, Jess Cagle, Randy Jones of the Village People, and Broadway and Hollywood star Scarlett Johansson was seen around town enjoying her visit in the Pines for a few days, before leaving on a helicopter. As I have said in the past, Fire Island Pines is America’s answer to the South of France. 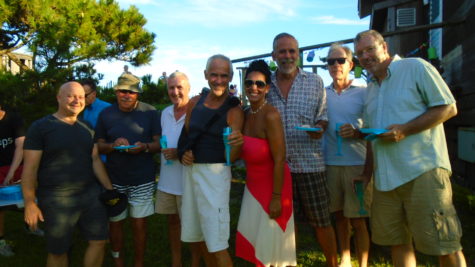 The Pines Co-Ops had its annual cocktail party on its Ocean Walk front lawn. At least 100 residents and their guests attended. The party was warm and friendly with a wonderful raw bar, crudité, cheese and other snacks.

The Baby Doll Party on the bay was quite the party, with many baby dolls jumping, swimming, and cooling off in the pool. At least 250 people attended. Dr. Chris Coad and his partner, Kevin Kowalski, spent a long weekend in Monaco enjoying a joyous 50th anniversary party with special dear friends. I’m sure it was a fantastic elegant event.

Rosemary Coluccio was at the pier seeing her wife Sabrina Shulman leaving on the ferry to fly off to Oklahoma to visit some good friends. John Knoebel and Ira Helf were out walking their dog and especially enjoying their new digs in the Pines. Rory Pottruck, a longtime Pines homeowner, is now guesting for a weekend with Michael DeFalco and Bill Matthews. He will be performing his cabaret act on Monday, Nov. 7 and Wednesday, Nov. 30, at 7 p.m., at The Duplex in NYC. Cost: $10 in advance or $15 at door.

FIPAP presents the Broadway show “Once On This Island,” on Sept. 2, 3 and 4, at Whyte Hall. Joe Barros is both director and choreographer, with Jack Aaronson as musical director. Tickets are $70, available at the Harbor or fifpap.org.

Bingo is back in the Pines at the Fire House. Doors open at 6:30 p.m. and bingo begins at 7 p.m. The last bingo game this season will be Thursday, Sept 1. The special 50/50 goes to the winner and a worthy Pines charity.

On Sunday, Sept. 11, the Pines Conservation Society, founded by John Whyte and Milton Stanson, will celebrate its 50th anniversary luncheon, Keeping Fire Island Pines Beautiful. Billy Carrol will cater the event, with lunch being served from noon to 2 p.m. Cost: $50 per person at the Pines Club.