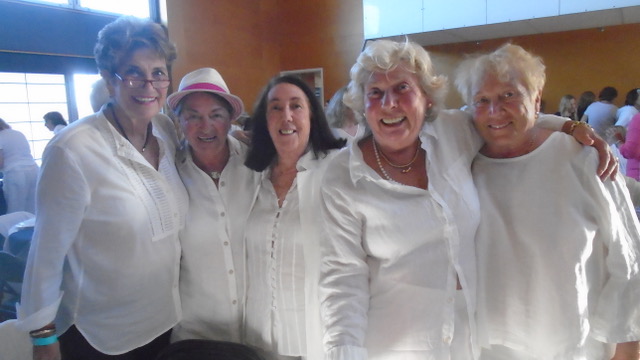 Women’s Pride in the Pines

Linda Gottlieb did it once again. She organized the 9th Annual Women’s Pride in the Pines, a fundraiser for The Ali Forney Center. Each year this event gets bigger and stronger. The dance was held at Whyte Hall, which was great fun with many guests, all dressed in white, dancing to the melodic sounds of Sue Levine’s excellent spinning. There was an open bar. Many gifts were donated for the silent auction. Everything was on point. Comedian/actress Judy Gold is no stranger to the gay community. She appeared in Cherry Grove last season. She took the stage and was received with a Pines welcome. Joi Caldwell, a singer, followed with lots of enthusiasm and excitement. She had the audience dancing. Billy Porter, who was the guest entertainer two years ago, was a featured guest on “The View” last week, as part of their Gay Pride Month celebration. The Ali Forney Center, the recipient of this fundraiser, is located in New York City. It is the largest organization of its kind and is dedicated to helping thousands of LGBTQ youths in the United States between 16 and 24 years old, providing housing, food, clothing and medical care. We thank Linda for her leadership in raising money for this important cause over the years.

Alana Berger, who lived in the Pines for 30 years, recently moved to Ft. Lauderdale. She spent a week in the Pines as Linda Gottlieb’s guest, and would not think of missing the Women’s Pride Party. Scott Reidel and Gil Neary are spending a week in Ireland with Gil’s brother, sisterin- law and their six children. Henry Robin and Bob McGarity are on a cruise to Iceland, Norway and points cooler.

Pines resident Jeff Mahshie, a past Tony nominee for his costume design in “She Loves Me,” is now costume designer for the Broadway revival of “Kiss Me Kate.” Bobby Michel, a Pines resident who lived in the Grove before he bought his Pines house, loves to attend the Arts Project of Cherry Grove events. He graciously agreed to host Bingo every Sunday at the Community House. The first bingo game, with the theme Bell Bottoms, begins on July 7, at 7 p.m., and will continue most every Sunday through mid-August.

The Tony Awards were wonderful on Sunday night, June 8. Our Fire Island News NYC Theatre Critic Leonard Feigenblatt made his predictions of the winners in the last issue, which came out before the show on Sunday. His predictions were almost entirely correct. Wes Pope, who lives in the Grove, is a dresser with “The Cher Show.” He is busy working this summer, but he will be here for the Invasion with his partner, Richie Mastascusa. They will perform as they have for the past 10 years in the opening number at the Invasion in the Pines.

Hal Hayes returned from Las Vegas, where he attended and spoke at a seminar for the American Institute of Architects (AIA). He also attended the opening night Gala of the Alvin Ailey Dance group at Lincoln Center. They will be one of the featured dance groups at DRA Fire Island Dance Festival in the Pines, on July 20 and 21.

The theme for the Pines Party this year is Island of Lost Boys. Save the dates on the weekend of July 26-28. Major companies have already donated large sums of money as sponsors for the event including Northwell, Fire Island Water Taxi, and many others.

This year, in honor of the 50th Anniversary of Stonewall, the preshow at the Invasion will be a little more spectacular with more entertainers, surprises and great fun. Get there early and get a good spot.

On July 6, Rose Levine will appear in “I Gotta Be Me” at the Cherry Grove Community House, at 8:30 p.m., with Chris Bell as director, and Mark York as musical director. Tickets are available at artsprojectcg.org.