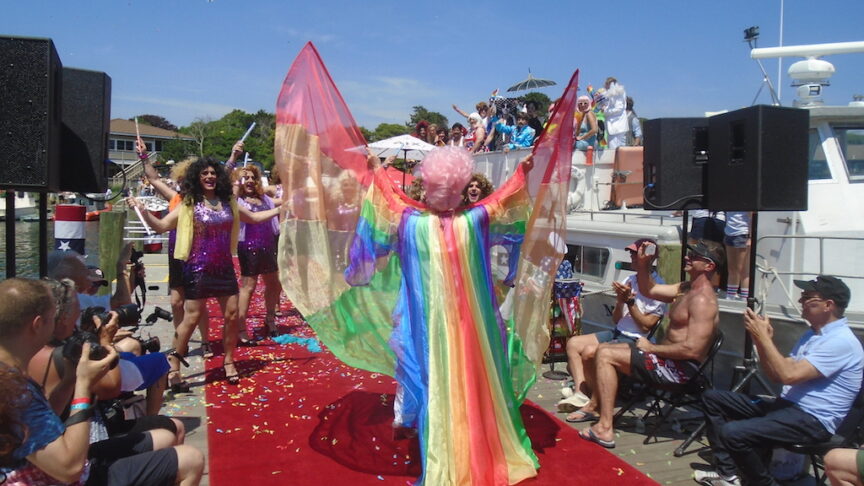 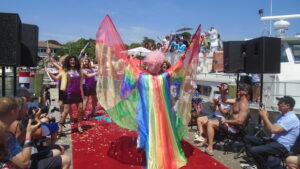 Panzi made a grand entrance looking spectacular in her rainbow gown.

We celebrated Gay Pride weekend here with lots of excitement. As we were watching the parade in New York on TV, we had a storm that was right out of the “Wizard of Oz” for 10 minutes right here in Cherry Grove. Trees, chairs, tables and other objects were destroyed and blown all over the place. We clicked our heels and we are back on track doing what we do to keep this town gay and fabulous.

I’d like to thank the wonderful audience who attended the Rose Levine Show “I Gotta Be Me,” at the historical Cherry Grove Community House and Theatre once again, on Saturday, July 6. It was very exciting for me to be on stage singing and performing as I have done for the past 65 years in Cherry Grove. The musical director was Mark York, who I have worked with for 24 years. I want to thank Chris Bell and Dale Lally who were supporting me as backup singers and performers. I would also like to publicly thank Martha Pitkin and Ellen Biggers for being my personal dressers backstage. I’d also like to thank the stage crew, Jay Robinson, Maria Elena Passeretti, and Dave Medina. A special thanks to Anita Auricchio for all of her devoted work. I also want to thank Matt Baney, Allison Brackman, Sharon Weinberg, and JoAnn Orfanos for all of their help. And another special thanks to Richard Cooley for hair and make-up. And thanks to the Arts Project for inviting us back again this year!

The CGCA had a very successful Italian Street Fair on July 6, at “Heaven and Earth,” with lots of homemade authentic Italian food, entertainment and great costumes. By the way, a happy 69th birthday to Diane Romano, who does so many wonderful things in Cherry Grove. We welcome Wanda Sykes back to the Grove, who has been working continuously this season. She will take a well-needed rest before going back to her TV and comedy routines. Richie Mastacusa had his family from Boston visiting with him including his mother, Marilyn; his sister, Diane; and his uncle and aunt, Bob and Debby Smith. This is their annual trip visiting the Grove. His partner, Wes Pope, could not be here because he is a dresser with “The Cher Show.”

The Garden Club had a very successful 23rd Annual Tour on July 7, featuring gardens on the east and west side of Cherry Grove. At 4 p.m., a cocktail reception was held at Ron Coombs’s home, “Phuket.” Peter Chase, the president of our Garden Club, is vacationing in Ecuador for 10 days with his family.

Michael and I spent an evening of dinner and a show in Ocean Beach on July 7, at the Island Mermaid. We walked with Fire Island News editor, Shoshanna, to Housers to meet her husband and just as we arrived, we saw Rudy Giuliani getting on his boat and just leaving Ocean Beach. We just missed seeing him by seconds! Where was he off to – the Pines?

Michael and I had a wonderful impromptu dinner party on Tuesday night at “Roseland.” Jan and Edrie happened to walk in and stayed for dinner as well as Peggy Samson and her cousin, Joan Beranbaum, who stopped by after a drink in town. We all had a great time! Marty Byman is back in the Grove with his wife, Peggy, after commuting from London. Welcome back to Cherry Grove after being away for a year, April and Mario Scarpa. They are enjoying their time and looking forward to a great summer. Thanks to Lois and Dave Ritz for supporting all of the projects and events in Cherry Grove.

Welcome back to Cherry Grove Mel Rock and Don Robb from Mechanicsville, Pennsylvania. They were residents of the Grove for many, many years, and continue to return every year. Kate Keen had her sister, Lori Keen, as her guest from Chicago. Lori is a visual marketing director for regional Bloomingdale’s stores. Kate is a creative director for Fortune 100 companies. Her latest and most prominent logo was seen on TV last month, in conjunction with Stonewall’s 50th anniversary. Neil Sedaka, guesting with his old friend, Jackie Presti, once again visited us in Cherry Grove. They had dinner out with us – he even took a turn behind the piano, surprising the audience with three songs that he wrote, “Breaking Up is Hard to Do,” “Calendar Girl” and “Love Will Keep Us Together.” What a surprise for those diners.

Gay Nathan and Julie Paradise once again had their wonderful July 3 cocktail party. Many of the old guard of Cherry Grove were in attendance. Their friends from Santa Fe, Dr. Frank Pieri and Dr. Gary Mihailk, rented a house in Cherry Grove and came especially for the Invasion and all the excitement.

Jane Haber and Toni Cesta hosted their annual pool party on a gorgeous Invasion day. At least 50 people attended during the day, going until 8:30 at night. The pool was 94 degrees and some of us never got out of it. It was a magical day coming right after a spectacular Invasion. Four days later, Toni was rushed to the hospital for an operation for stents. She is thankful to now be back in the Grove and enjoying her life.

Gerri and Morgan MacWhinnie had a partial family gathering with their children and spouses and their grandchildren. Their daughter, Inez, returned to the island for 20 days from Mangawhai, New Zealand, where she has been living for the past five years with her family.

Jack Dowling, Tommy De Mastri, and Joyce Yeager shared their stories with a very receptive audience on July 13, at the Community House, at a matinee performance of “Gay Writers, Gay Stories.” Michael and I attended one of the weekly performances of Hedda Lettuce in Cherry Grove. As usual, she’s knows how to work an audience.