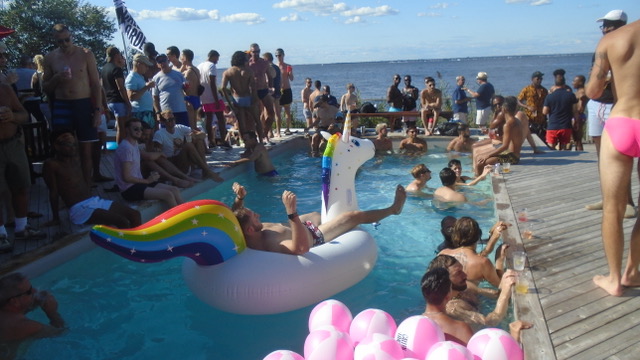 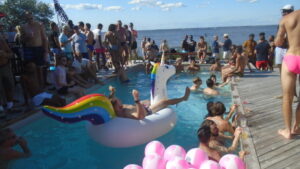 A sea of pool parties were running simultaneously on Aug. 24 in the Pines, and all were going swimmingly.

Liberation, hosted by Jon Tilli with VIP brunch and Stoli party. Hudson Taylor, president of Athlete Alley, spoke about her division, and how they educate youth in the LGBTQ community. Sara Leavitt also spoke about her division, Open Finance, which works with LGBTQ women teaching and training them about finances. A younger off-island crowd affiliated with this organization attended this pool party.

Callen-Lorde had their annual Splash! pool party at Gil Neary’s house on the bay. The attendance was
huge! The pool was filled to the brim with people, balloons, and pool toys. Dave Guggenheim, chief of mental health, and Donnie Roberts, senior director of development and communication, were on hand to greet everyone. Callen-Lorde has its main offices and medical facilities in Chelsea, and plans to open a branch in Brooklyn in 2020.

Not far away, the Human Rights Campaign (HRC) annual pool party fundraiser was held at “Beachcomber,” hosted by William Kapfer and Eric Baker. This too was another success. Many Pines regulars attended including Jim Pepper, Ward Auerbach, Andy Baker, Ron Chereskin, and Howard Goldfarb stopped by before going to check out the Callen-Lorde function.

Robbie Regina and his husband, Gene Kagan,who lived in the Pines for many years, moved to Watermill. After the pool parties, many of their Pines friends traveled to the Hamptons to attend their housewarming party, which I’m sure was spectacular.

Albert Lepage, Durrell Parish and Andre Almeida have returned to the Pines after spending
a vacation in Provincetown, and then Mikonos.

Brian Rubin and his husband, Toby Sowers, spent many weekends in the Pines. Brian was here this past weekend with his childhood friend, Greg Davis, who lives in Houston. They were both born 45 years ago in the same hospital in Encino, California. They lived in the same neighborhood, attended the same school and remained friends. Greg just happened to be the Empress in the Houston, Texas, Imperial Court System in 2008. His drag name is Marcia Mink Gill. This was his first time to Fire Island. After enjoying Friday Tea Dance in the Pines, they spent the first evening in the Grove with Michael and me, where we had dinner. Brian and his husband, Toby, have two children, Anna and Jonie. Brian and Greg did all the tourist attractions that you do in the Grove and the Pines. They attended an Underwear Party in the Grove, the Callen-Lorde pool party in the Pines, dinners out, attended Tea Dance, walked through the Meat Rack and had a great weekend.

Joe Lieb had his cousins from Denver as his weekend guests, Mo Baumgarten with his children, Rob and Samantha. Rosemary Coluccio had Jossi Kirk as her houseguest from Melbourne, Australia. Barbara Gilston returned to the Pines and was the guest of Atilano Gimenes.

For many years, a group of local homeowners in the Pines have a volleyball tournament every Saturday and Sunday. I met three people from the Grove, Dominic Paolillo, Anthony Fiorelli and Matthew Colvin, who were on their way to join the team.

I was very sad to recently learn that William Meyers died in December. He and his partner, Wayne Adler, left
the Pines a few years ago. They founded the chic William-Wayne & Co. design home shops in New York
City, which have been very successful.

Gil Neary and Matthew Bank have merged their businesses and have announced that DGNeary Real Estate will now be known as Bank Neary. We wish their new venture every success – and we wish our Pines readers all the best as we say farewell for another season.

Upcoming Events:
• FIPAP is presenting “The 25th Annual Putnam County Spelling Bee,” with a cast of nine actors, plus special guest appearances at each performance. Showings are on Saturday, Aug. 31, at 6 p.m., and Sunday, Sept. 1, at 6 and 9 p.m., at Whyte Hall. Music and lyrics by William Finn, directed and choreographed by Cynthia Murray Davis, and musical director Cody Dry.
• Congregation B’Nai Olam will once again have High Holidays services at Whyte Hall. Rosh Hashanah services will be celebrated on Sunday, Sept. 29, at 7 p.m.; and Monday, Sept. 30, at10:30 a.m., with a luncheon to follow. Yom Kippur services will be Tuesday, Oct. 8, at 8 p.m.; Wednesday, Oct. 9, at 10:30 a.m. Yizkor on Wednesday, Oct. 9, at 1 p.m.; and Ne’ila at 6 p.m., with breaking of fast to follow.
• The annual Theatre and Literary weekend at the Madison Guest House once again will be held on Columbus Day. See flyers in September for information, when available.