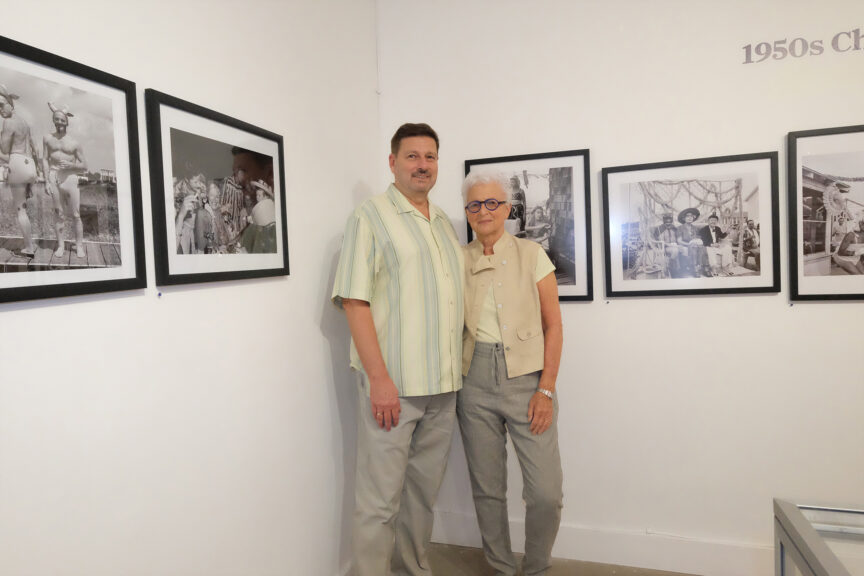 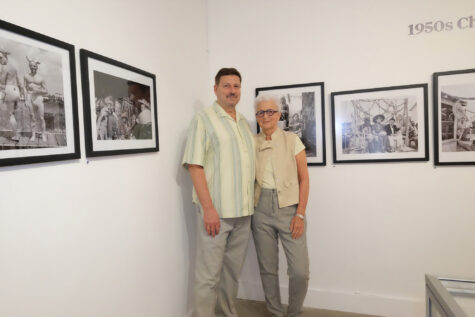 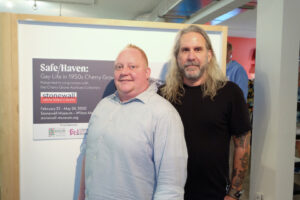 My fellow CGAC committee members, Troy Files, Brian Clark, Lorraine Michels, Lee Sharmat, and I were in attendance, together with Museum Director Hunter O’Hanian and Deputy Director Emery Grant. Troy Files, chairperson of the Archives Committee, began the evening’s presentation by talking about the Archives, a committee of the Arts Project of Cherry Grove. Co-curators Brian Clark and Susan Kravitz continued with a discussion about the significance of the 1950s in Cherry Grove’s history, a time when gay people had to keep their secret identities hidden away. 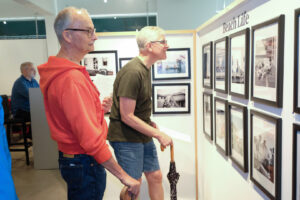 More than 90 people were in attendance at the second, open-to-the-public reception held the following evening, Feb. 21. When asked how many in the audience had visited Cherry Grove in the past, as least 90 percent raised their hands. This writer spoke about the unusual sociability of the 1950s, when men and women, straight and gay, often performed in theatrical events at the Community House and even attended costume parties together every weekend. Three members of the audience agreed, volunteering that they had summered there in the ‘50s. One was Jac Venza, age 93, a celebrated public television producer of theater and music programs. He, along with others, shared memories of the campy parties, theatrical shows, quirky house names, and life in a community where being gay was the norm. Brian Clark reminded the audience that, despite the freedom of expression that was prevalent in Cherry Grove, there occurred random nighttime police raids during that era. Gay men were arrested in the Meat Rack and later handcuffed to the dock, at times all night long, to await a police boat to take them across the Great South Bay to the Sayville courthouse. 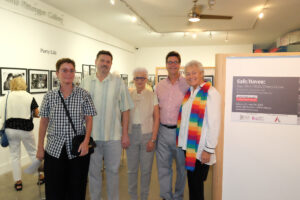 The audience was grateful to hear the 1950’s Cherry Grove stories firsthand while, at the same time, having theopportunity to view over 60 restored photographs from that period. The photographs illustrated three main social themes of life in the 1950s: party life, theater events, and beach life. This distinctive collection of images and memorabilia from that decade celebrated an important phase in LGBTQ history during one of the most homophobic epochs in American history. It was a time when men and women lived in fear of being identified as gay; if so, they might have lost their jobs, been arrested, or even been committed to mental hospitals. In Cherry Grove, however, there generally existed that rare freedom to be open about oneself and to freely enjoy one’s sexual identity. It has even been said that in the 1950s one could hear the sound of laughter everywhere in Cherry Grove, a proud beach community considered to be the earliest LGBTQ safe haven in the United States.

Guest contributor Susan Kravitz is the former Dean of Arts and Humanities at Nassau Community College, author of “Mascara, Mirth & Mayhem” as well as co-curator of this exhibition.

UPDATE: As of March 14 2020, Stonewall Gallery on Wilton Drive remains closed until further notice due to the coronavirus outbreak. To compensate for this interruption, Cherry Grove Archives Collection has produced a virtual version of this exhibition which can be found here: