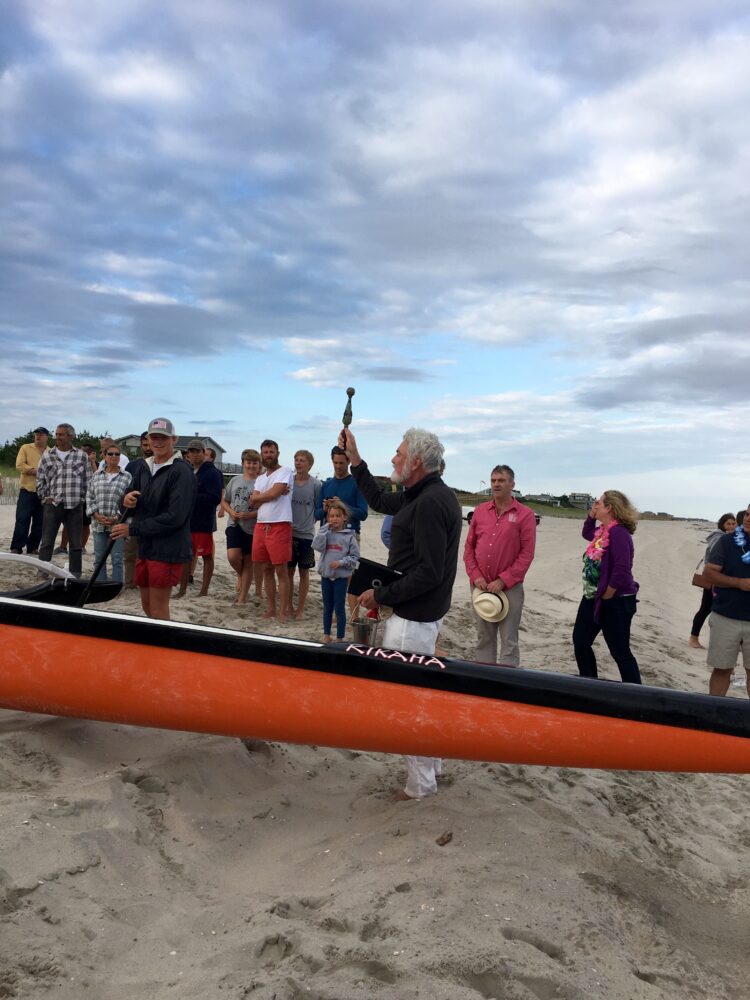 Okay, sorry to rub it in. First things first:

This Saturday, Aug. 5, comes the annual Music & Arts Festival. Truth be told it’s a bit uncertain what its formal title is these days, but the posters across town say M&A, with the day divided, with considerable gall, into three parts. From 10 a.m. to 2 p.m. is the Artisan Fair, with local craftsmen unfolding both their tables and their creations along the main boulevard of the village, accompanied by music (also courtesy of local talent) emanating from the Market deck. From 3 to 4 p.m., the Captain Al watermelon party bursts over the field, with games and more music to aid the digestion. Finally, evening arrives bringing everyone’s fave, the bay picnic and fireworks display, from 6 to 9 p.m., or probably a bit later as the last remaining explosives detonate in the night sky, man’s colorful if somewhat feeble riposte to Mother Nature’s (or is it Father Time’s?) sunset. Hopefully the weather will prove more cooperative this Saturday than last, when rain and wind were enough to force a one day delay in the sandcastle contest and an uncertain re arrangement of FIA’s annual meeting in Ocean Beach. No, sun and warmth are in order – what we in Saltaire call “Saltaire weather,” or what they in Fair Harbor call “Fair Harbor weather.” 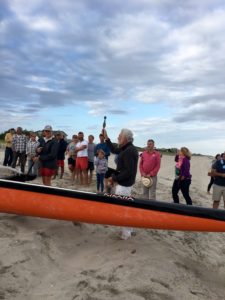 Father Richard Viladesau blesses the “Kikaha” prior to her christening and formal launch. (Photo by Catherine O’Brien)

Now, it’s true that the next meeting of the Board of Trustees is being held that same morning, beginning at 9 a.m. at the firehouse, but Your Government is determined to move the session along expeditiously, or, if absolutely necessary, quickly, to give us all a chance to escape, or should I say get out, and take full advantage of the festivities. To that end the Q&A will start before the M&A, PDQ in the AM and not lingering into the PM, and PS, the sight of craftspeople setting up outside beside the firehouse fire hydrants will be further inducement to hastening the business at hand: swell artisans amidst artesian wells. Well, that’s the best our art can manage.

On the subject of field days yet to come, Ralph Perlberger is organizing the games of the 19th Annual Saltaire Soccer Cup, to be played the weekend of Aug. 12-13. Registration will be held on the Saturday from 8:30-9:30 a.m., a slender window of opportunity but one not likely to discourage our avid footballers, and as always Ralph advises aspiring entrants to show up early since slots fill up rapidly. The entry fee is $15, the tournament is open to men and women ages 13 and older, priority is given to Saltaire residents and their guests, teams and schedules will be posted by 10:30 a.m. and play gets underway shortly after. Even writing that is exhausting. As with so many great community events the Soccer Cup has become bigger and better every year, with so many people wanting to join in that increasing numbers of newcomers must first pay their figurative dues in post-tournament roles as soccer hooligans. And in its traditional spirit of cooperation the softball league even yields some of its valuable field time. This is what makes Saltaire Saltaire. A columnist from Walla Walla would have a field day of his own with that formulation.

Last Saturday we had one of those rare Saltairian events combining the goofy with the reverential, the launching of the Good Canoe “Kikaha” (“soar” or “glide” in Hawaiian) off, appropriately, Pacific Walk. No one was willing to take sole credit for the idea, but Rich Wilde seems to have spearheaded buying the 44-footer, to be used variously by the lifeguards, camp and private citizens who can muster the required crew of six. It’s a genuine Hawaiian dugout, built in the islands, eventually moved to California, thence to New York, and hence to us’n. Speaking of USN, former lifeguard and retired Navy Commander Jamie Godwin delivered the principle address, pointing out the proven scientific assessment that any vessel must be christened with alcohol. Father Richard Viladesau delivered a truly inspiring prayer for divine blessings on the ship and all who sail in her, Mayor Zaccaro, Trustee Richard and assorted other notables spoke, and after being drenched with three bottles of bubbly and several sprinkles of Holy Water, the canoe was carried to the sea by the assembled throngs, where it was set adrift with a half dozen sturdy guards at the oars. In the spirit of things and as an academic exercise I tried to render “Saltaire” into Hawaiian, not easy for a language with only 12 sounds – seven consonants and five vowels. Using conventional transliterations it’d probably be “Kaleka’ilei” or thereabouts. Oh well. As they say on Oahu, “Book ‘em, Danno.”

Just to peek a bit ahead – details next time – remember the Jogathon (Aug. 20) and the Centennial celebrations Aug. 26, marking the 100th anniversary of the village’s formal establishment as, well, a capital-V Village. Both promise to be busy and enjoyable days, and to make sure everything goes swimmingly Public Safety has been busy coordinating crowd and traffic-control procedures, laying on additional personnel to help keep things flowing smoothly. It’s true that at long last law enforcement has received official presidential sanction to beat up prisoners, criminals, malingerers, bystanders, children, retirees, pets and general malcontents, but as our department doesn’t have Peace Officer status we’ll have to recruit vigilantes armed with clubs and modest IQs in order to maintain order, just like 1917…or Selma ‘65. Feel safer already? Well, do ya, punk?