Well, that was some winter we’re still having. This is why it seems like such a short time since everyone closed up – the weather hasn’t evolved with the seasons and now everything is open again already. But nicer weather is at long last on the way, the market and club are cautiously creaking open and the ambulance calls have begun. Saltaire’s centennial-plus-one is officially here!

There’s not actually a great deal to report at this early stage, if you don’t count the continuing sagas of the Village Hall, 14 Bay Prom, Lighthouse Prom, the Post Office, the house donation, the election, FIMP ‘n’ FIMI, ferries, lifeguards, the Fire Co., the cart, the camp, the plague of seven-foot-long mosquitoes on its way from devouring Davis Park, etc. – the usual routine. Still, a few quick notes on the up-and-coming.

Fresh from the successful concert that concluded our Centennial observations last Aug. 26, the Village is sponsoring a similar festival on Saturday, May 26, at the field from 7-10 p.m., to help kick off this summer’s fun. Refreshments will be permitted (on a bring-your-own basis: no taxpayer money used for food and drink, not in this Saltaire) thanks to a special dispensation provided by the Board, temporarily suspending our “open container” law (which, its popular name notwithstanding, prohibits, not requires, the toting of open containers of alcohol-fueled products), which will momentarily allow you to open as many containers as you wish without being beaten and dragged away by Public Safety. Live reggae music with improved acoustics will be provided for the hearing-impaired throughout the village, although here again, you’ll have to supply your own multicolored hats. So be prepared to publicly wine, dine and dance the night away once the softball players have been cleared off and the deer shooed away. The more traditional community venues will also be in full swing that same evening to mark the formal start to the new season. 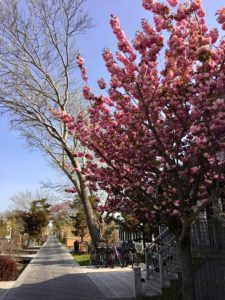 The village in bloom at last. (Photo by Catherine O’Brien)

Municipally, we have an election coming up on Friday, May 25 (polls open at the Village Hall from noon-9 p.m.; registered voters only), in which the mayoralty and two trustee seats will be at stake. Incumbent Mayor John Zaccaro is unopposed for a second term while three candidates are vying for the two spots in our annual electoral game of musical trustee chairs. In that one two incumbents, Frank Wolf and Hillary Richard, are seeking reelection and are opposed by Keith Stein. It’s unclear these days who in the long run the real winners of such contests turn out to be, but if you value your democracy be sure to cast your vote before what’s-his-name in D.C., you know, that admirer of Kim and Xi and Mussolini and other small-d democrats, repeals that part of the Constitution. Swearing-in ceremonies will be held at the Board meeting that Monday, May 28, followed by the traditional start-of-season swearing- at ceremonies on the part of the citizenry.

Memorial Day weekend wouldn’t be Memorial Day weekend without a Memorial Day weekend Pancake Breakfast, and the Saltaire Volunteer Fire Company will as always step into the flapjack fray to serve up some of Saltaire’s finest on Sunday, May 27, from 8-11:30 a.m. Per recent practice there will be no entrance fee, which frees the department of liability issues, and instead we’ll rely on your considered judgment and traditional generosity for voluntary donations, whatever form that judgment and generosity may take. Stuff and paraphernalia will be on sale too (shirts, mugs, other shirts, while supplies last and we don’t have to climb back up into the loft to get more), and these things do carry a very modest prix fixe, but are well worth the envy they evoke amongst people inhabiting communities blessed only with lesser fire departments.

Now, I have to explain that I just flew in from England the day before this particular column was due, so apart from my arms being tired (Jack Arnoff, where are you?!) I was caught off guard when I received an abrupt reminder of same from my editor, unaware that I had fled the jurisdiction, so to speak. Her missive came with 75 minutes remaining to allow me to come up with something that might pass muster as sufficiently informative yet not too dense to give Ken Larson any reason to complain that he can’t understand anything I write, as though that was a problem unique to him. It then turned out that thanks to my jet-lag I was also a day late, but I was kindly granted a stay of submission and as it developed made it in under my mistaken deadline anyway. It’s rather a bit thumbnail but I hope just enough to whet your appetite, if not your pants, for the summer to come.

We’ll all catch up and have a great time, so no rush, and besides, in barely a month the days will start to grow shorter and the sun will begin its southerly solstice sojourn toward the ocean, heralding the promise of winter … which is where we came in. Just trying to get everyone in the mood!