Oh, so, now, suddenly, you realize the month is running out – now, after it’s almost too late. Time to make hay in these last two weeks of summer 2016. To aid you in that quest, the following….

This Saturday, Aug. 27, the sandcastle contest, the final SCAA foray of the summer (though not of the year), gets ingrained in yet another summer as Saltaire’s budding builders and artistic architects construct their usual array of astonishing creations that will permanently* adorn the oceanfront. (*“Permanently” being defined as that period before the tides wash and tires squash all the incredible stuff on which so many people so long labored.)

But NOTE: The latest signs posted about the village have a time change; now, judging is scheduled for 1 p.m. This is emphasized by handwritten additions to the posters reading, “Dig the new time” and “Dig the earlier finish time.” The “Blackboard Jungle” dialogue aside, this once-modest event has really become a testament to our fellow residents’ artisanship and the entries are always something to behold. So come early, dig deep, build high and let creativity run unbounded. And since it’s the first contest held since the beach was restored, it’ll also be a way of testing how conducive the new grain size is to molding sand sculptures.

PANCAKES! Next Sunday, Sept. 4, from 8-11:30 a.m. at the old Casa del Fuego. If Trump wins that’ll be the last time I have a chance to use that joke without being arrested. Per recent custom, there will be no admission fee. Entry is gained by voluntarily forking over whatever sum (if any) you feel is justified for a repast of golden-brown western-style pancakes; hot, spicy southern sausage; real Vermont maple syrup (anything with the word “Vermont” in it is a guarantee of wholesomeness); melt-in-your-mouth Wisconsin butter patties; sweet, moist Danish pastries; fresh-squeezed Florida orange juice (at least it was when it left Florida); scooped-from-the-tin blended Jamaican-Brazilian-Colombian-Kenyan-Dunkin coffee (caf and decaf); and healthy Caribbean-Hawaiian mixed fruit salad assuming we don’t forget it this time. That’s quite a deal, I mean, considering communal dining and so forth. So please come and enjoy it all, again. No refunds. 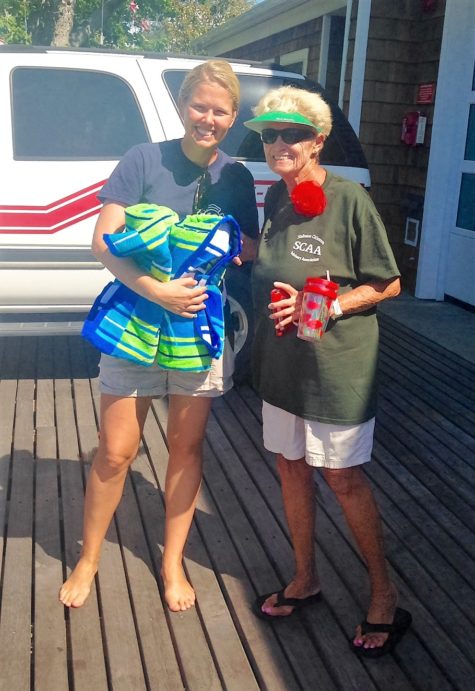 Now, as we go to press Sunday (okay, technically, I’m going to hit the “send” button) the annual Jogathon is ending and we aren’t able to gather the names of the winners in time for this issue. However, there’s one more F.I. News still to come, and it’s coming next week – not two – so it’ll be then that we’ll provide you with the list of winners, or at least directions to find their names someplace on the internet.

But what I don’t have is the results of the 18th Annual Perlberger Cup soccer tournament. Ralph sent out a big thank-you to everyone but for once omitted the teams’ standings. There were some photos posted on the field fence showing various players in various stages of play and celebration, and one of a grinning RP himself, his right arm in what must by now be a custom-designed sling. In his email Ralph mentioned he had lost 3 pounds over the course of the weekend, although the sling put it all back, but clearly Tourney 18 was hugely successful despite the stifling heat and humidity, or as Fox News calls it, a summer cold snap. Anyway, the goal now is to get Ralph to score the details. 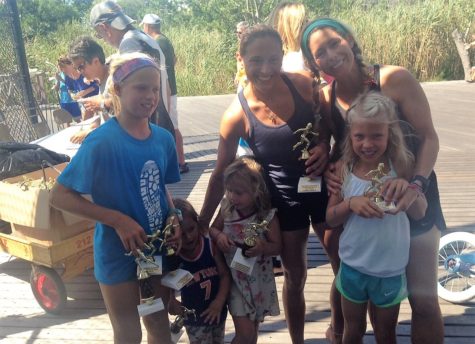 Oh, one last thing, a group of concerned citizens is hosting a sort of fundraiser, well actually not money, but to collect Thomas’s English Muffins for Connie Lawler, whose house guests took the next ferry back last week after she found the market had sold out of them. Of course Fire Island isn’t like the States, where grocery stores get deliveries of hundreds of English Muffins daily, so many that thousands are doomed to go unconsumed and become substitute Frisbees: the playing fields of Eatin’. Anyway, while standard muffins are preferred, donations of blueberry, corn and the new limited edition Salted Caramel flavor (yep, it’s real) are welcome. My wife, who’s English, says there’s no such thing as “English muffins” in England, so I’ve been buying them up, repackaging them as “American Muffins” and shipping them to the UK as a bit of exotica at 5 pounds a pack, with no pesky EU purity standards to worry about anymore. Now you know why the store ran out, Connie.

Quiz time! With the candidates selected and two-and-a-half months till we’re paroled, it’s time for a round of presidential trivia. Answers next week. No prizes, no way to send in your guesses, no recognition, and everyone will probably look them up anyway, but it might provoke some idle beach debate.

ONE. Both candidates this year have the same home state. (a) When was the last time this happened? (b) Who were the candidates? (c) Who won their mutual home state?

FIVE: Hillary Clinton and Tim Kaine weren’t born in the states they made their political careers in. What was the last election in which none of the four national candidates was born in the state they represented? Who were they and what were the eight states involved?

SIX: On inauguration day Clinton will be 69 and Trump 70. How many of the 43 previous presidents had passed away before reaching either age? Extra props if you can name ‘em all.