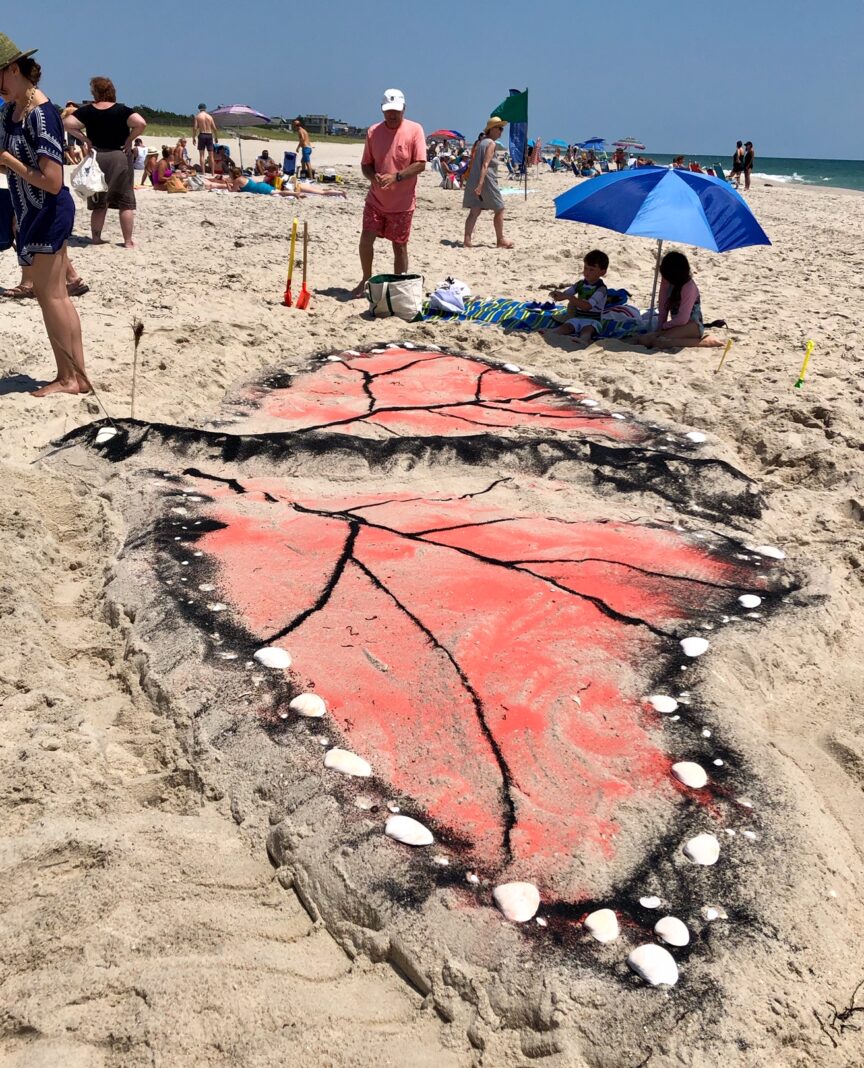 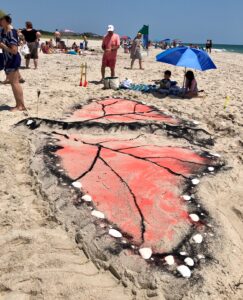 “Save the Monarch Butterflies” by Aoife Hennessey snared first prize at the annual Sand Castle contest.

Yes, it’s August, if your calendars haven’t combusted over the past couple of weeks. It’s cold comfort, but our recent heat wave chilled in comparison with some others – the highest temperatures ever recorded in western Europe (up to 108), mid-90s even in Alaska, challenging our own discomfort level, though at least our dunes, unlike their glaciers, don’t melt. Anyway, Oklahoma Senator and former imbecile Jim Inhofe says it’s all a hoax, so before the snows fly, relax and check out some of what’s coming in summer’s final phases.

The 21st Annual Perlberger Cup’s soccer tournament gets kicked around Saturday, Aug. 10 and Sunday, Aug. 11. Registration will be Saturday at the field from 8:30-9:30 a.m. (register early as slots fill up quickly). Entry fee is $15, teams and schedules are posted by 10:30, and play commences soon after. Qualifications are strict: men and women ages 13 and over. Priority is to Saltaire residents and their guests, real and imagined. Sadly, a somber note troubles this year’s event. In Ralph’s words: “The 21st Annual Saltaire Cup is dedicated to J.D. Butler (died April 13, 2019). A gentle man and a friend to man, he brought joy to his teammates, family and this world. We miss you, J.D.” Well said, Ralph.

Elsewhere, the SCA offers a full plate, starting with the re-imagined Saltaire Festival, which for the first time will, much like some Saltairians, be strung out over two days. Officially, that is. Last year this happened due to rain, and everybody liked it, so now it’s institutionalized – quite unlike most Saltairians, I hasten to add. On Saturday, Aug. 3, the Cap’n Al Watermelon Party starts at 3 p.m. at the playground-art shed combo, since watermelon rinds are something of an impediment on the ball field. Not many Saltairians remember him now, but it should be remembered that this year marks the 50th anniversary of Captain Al Skinner’s retirement as Saltaire’s ferry skipper, so a few kind words to that effect might be in order before the party begins. (Of course, Al always had plenty of bourbon on hand for older children – the ones aged 35 and over that is – but alas, times evolve, or at least change.)

Full plates indeed at the Bay Picnic, from 6 p.m. until the fireworks start detonating at 9 p.m. and the bayfront is blanketed by showers of burning lights and shreds of burned-up cardboard. In between there’s the culinary contest, featuring assorted sorts of epicurean delights tendered by the attendees, with ribbons awarded to the judges’ favorites in each category (by age and type of food). These include: two for Under-15 (sweet and savory); two for Under- 25 (but, presumably, over 15) sweet and savory; and for Adults (the SCA’s term, not mine) a big four – best appetizer (Pigs ‘n’ Blankets! Pigs ‘n’ Blankets!), best entrée (that means if you know Mario and can get him to do stuff for you), best dessert (we always stressed desserts), and best cocktail – and especially best cocktail. Entries must be made between 6 and 6:45. Everything will be kept sheltered and on ice until judging starts promptly at 6:45. This is a lesson learned from last year, after many entries melted, got diluted or otherwise suffered potentially unpleasant gastronomic degradation from the heat of that large yellow thing in the sky. Hopefully, the food will be fresher, the flavor tastier and the ribbons bluer this year. Next day, Sunday, the Broadway Fair portion of the festival unfolds from 11 a.m.-3 p.m., on Broadway near the Bay. Live music by local musicians and a festive lunch by local chefs will be available on the Saltaire Market deck, whilst artisanal vendors vend their artisanal offerings along Broadway. Kids can also sell crafts and baked goods from wagons by the Gazebo. See the SCA website for registration and other details. Nicer to have the fair unspool over two days instead of jamming it all in on one Saturday. We need a breather.

And, the Jogathon runs the following weekend, Sunday, July 18, starting at 9 a.m. Three races this time: a 1-mile for kids (10 and under), then the standard 1- and 3.5- mile races for un-kids. Registration is taken and race details given on Saturday, Aug. 17, from 9 a.m. to noon, at the Gazebo. Entry fee is $20, for which you get the requisite T-shirt; kids don’t have to pay if they don’t want a shirt, but for everyone else, shirt or no shirt, it’s 20 clams, if you can still find any clams in the bay.

SCA is involved in sustainability initiatives: an optimistic endeavor, perhaps, on an island that is, after all, sinking, but we have a responsibility to the environment. At the festival there’ll be a table promoting eco-friendly products, including Patrick’s own soap and washing-machine powder (which work extremely well) plus information on planting milkweed and nectar plants to support Monarch butterflies. On Aug. 17, the SCA Sustainability Committee is collaborating with Keep Islip Clean to have a pickup day on Saltaire’s beaches, with further efforts being teased. Check it out and help it out.

Last but not least, on July 20, we celebrated the 50th anniversary of the Fire Company’s incorporation with a bigger parade, fewer trustees, more involved food and much hotter participants than in the past. When used in conjunction with one another, the words “free” and “food” constitute the most hazardous phrase spoken in Saltaire, and thanks to Market owner Patrick Adams’s catered delicacies the stampede was larger than usual (abetted by a desire to get in out of the sun). Acting SVFC Chief Josh Raeben gave a speech of thanks and welcome, while our colleagues at the Kismet FD presented a pair of plaques, one honoring the Company, the other honoring one of the most valued members of the Saltaire community, the great – truly – Vern Henriksen. All in all, a template for the SVFC’s centenary, 50 years hence. Hey, the last 50 went quickly enough.