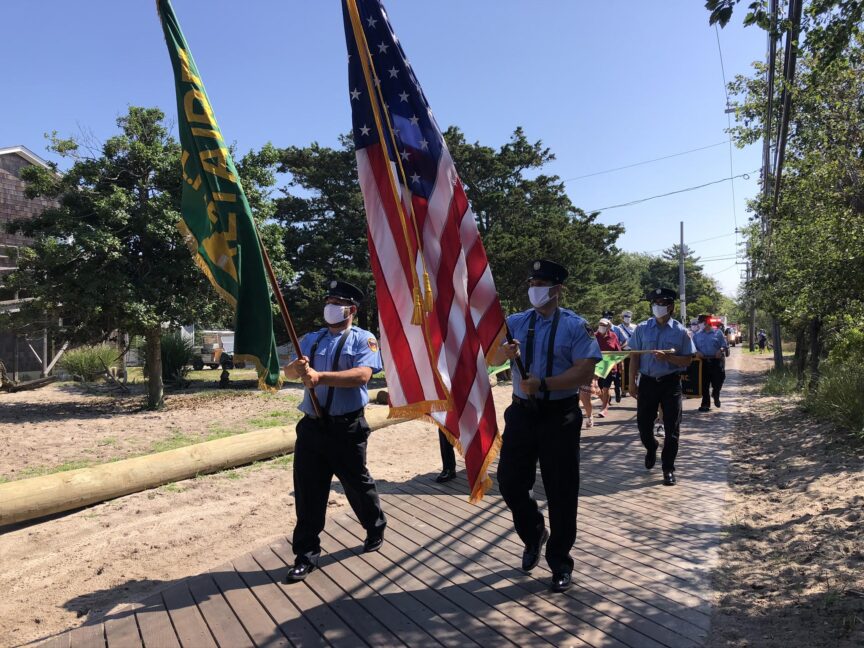 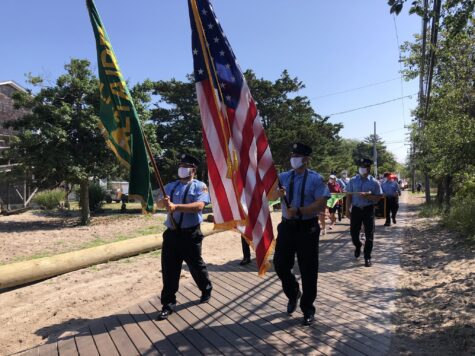 The proudest members in the SVFC’s Eastern Parade. (Photo by Mary Posillico.)

TAKING A CUE FROM James T. Kirk, the Saltaire Volunteer Fire Company boldly went where it had never gone before, except in response to sub-strand distress calls. Pandemics cast to

the wind, the SVFC determined to show the flag, literally, especially given the contraction of events this summer. So, on Salt Date 1807.20, the department departed for deportment from a depot in a part of town, which no defile had ever defiled through, the East End of rumor and fable. For the first time ever (or as far back as anyone can remember, which is about three years), the annual parade passed past every street from East to West walks, 18 blocks as the crow flies and the crowd flees. Then rights on West, Bay and Broadway and straight on to quarters. Almost tipped two trucks off West, but our starfleet personnel know how to cling on a walk and veered away from an embarrassing calamity.

We’d never before staged the start of a parade from anywhere but the firehouse, so logistically this involved getting people and vehicles to the jumping-off point before we could even begin – which provided an extra treat for residents stuck behind or on the sidelines of the motorcade, allowing them to watch the proceedings proceed twice, prior to and post-U-turn. Covid constraints curtailed inclusion of traditional accompaniments, meaning hats, the band, kids on bikes, food, music, other departments and the public gathering were dispensed with, though hand sanitizer was just plain dispensed. But we had flags, banners, patriotic songs taped for the occasion, a Board of Trustees rented for the occasion, and drivers who, on the theory that everyone needs a jolt now and then, couldn’t resist pressing the “wail” siren each time they drove by a hitherto sedate group of citizens. Nevertheless, spectators showed approval and showered applause, and the expanded route was a hit that might be tried again once normality (admittedly a term not generally associated with Saltaire) returns.

I erred last time saying the SCA had bounced all its outdoor activities this summer. Quite the contrary: on July 8 it held its first ocean clean-up, residents bagging a ton of trash secreted in the sands; a second round squares off Aug. 16 – volunteers appreciated! (SCA will email info.) Meantime, the sand castle contest will be held Aug. 7 (rain date Aug. 8), with socially-distanced exhibits subject to the socially-distant judging commencing at 1 p.m.

What’s nice about all this is that it shows the commitment of so many Saltairians to so many other Saltairians, even in times of Impatience and Stress. (Good law firm, by the way.) Softball’s coming too, July 25, players protected by pre-game corona measures and rewarded by post-game measures of Corona, so things are improving. Just remember this year’s communal slogan: Behind every mask is a person who cares. Or is about to rob the ATM. But with care!