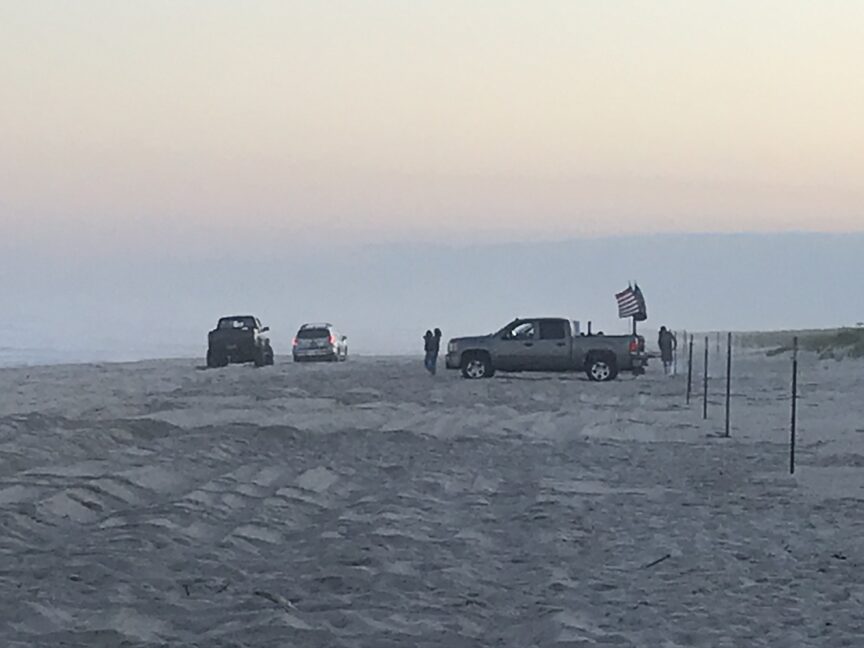 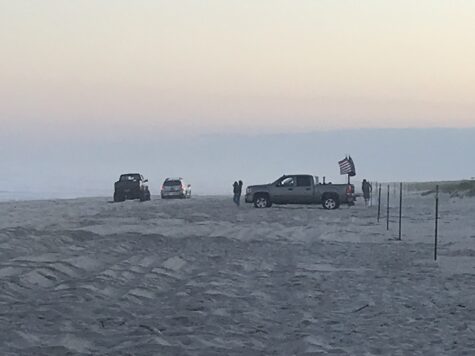 By Timothy Bolger ~ Beyond the 17 communities, out past “the other Fire Island” in the wilderness area, lies another side of the barrier beach — the far reaches of the national seashore that rarely gets attention.

Smith Point County Park in Shirley, like Robert Moses State Park on the westernmost tip of the island, draws day trippers to the oceanfront on the opposite end of Fire Island, but instead of the Robert Moses Causeway, visitors take the William Floyd Parkway. With the summer of coronavirus bringing the need for social distancing and reduced crowd capacity caps at the seashore, my eyes were recently opened to Fire Island’s final frontier of driving off road on the outer beach — a five-mile stretch of nothing between the lifeguarded bathing area and Moriches Inlet where off-roaders can stretch out and get their kicks.

“Loading the family into a truck and going to the beach is a fun, cost-effective way to spend a Saturday or Sunday with your family and one of the key reasons many of us still live on Long Island,” said Ed Newman, an off-road advocate from Bay Shore.

For residents of central FI’s communities lucky enough to score a hard-to-get federal permit from the seashore, driving on the beach is more of a function of getting from point A to point B than a fun outing. But Robert Moses also offers off-roading for those who acquire the New York State permit by the deadline each spring to drive west of Field 2 to Democrat Point overlooking Fire Island Inlet.

“We call that amateur beach,” a Suffolk County Parks ranger patrolling Smith Point outer beach was recently overheard telling an off-roader asking about Robert Moses. “People go there to do anything but fish.”

For Suffolk residents who have a Green Key — the county’s park pass — there’s no deadline to get the outer beach permit, although access is limited to county residents this summer due to COVID-19. More than 10,000 outer beach permits are issued annually, also offering access to Cupsogue, Montauk, Shinnecock East, Cedar Point, Northwest Harbor, and Orient Point county parks.

While more than 200,000 beach goers visit Smith Point’s main beach each season, and its campground has nearly 7,000 reservations annually, it’s unclear exactly how many trucks drive on this stretch of outer beach every year. But what is clear is that demand is high. Smith Point’s outer beach is routinely at capacity and no longer allowing trucks on by 8 a.m. on weekends.

Part of the reason for that is due to Piping Plover nesting this time of year — frustration with federally protected endangered birds being one of the few parallels between daytripping Smith Point off-roaders and some FI community residents. Large swaths of the outer beach are closed to traffic and night fishing is prohibited until nesting is over.

“We are limited … because of a recent hatch,” a Suffolk spokesperson said.

When first launched in 1997, the Endangered Species Protection Program resulted in 32 pairs of plovers producing 28 fledges. In 2018, the program produced 62 pairs with 100 fledges, the highest number of fledges in the program’s history. When the fledged are grown, often in mid-August, the outer beach is returned to full access to the public and four-wheel drive beach vehicle enthusiasts.

The implementation of protective measures such as installing string fencing, barricades and predator enclosures, careful monitoring and Park Ranger enforcement of restricted areas enable the fledging process to progress naturally and undeterred. The loss of a nest due to human or predator intervention may result in the plover pairs re-nesting, which restarts the nest-to-fledge cycle. It takes an estimated 27 days for eggs to hatch, and additional 25 to 35 days for chicks to fly.

“One goal of the program is to ensure the first nest is successful and not disturbed,” said Suffolk Parks Commissioner Phil Berdolt. “This will result in our beaches opening sooner for full public access. If the plovers need to re-nest, the process is delayed and partial beach closures extended.”

The four-wheel enthusiasts can hardly wait to roll down the easternmost end of Burma Road again, eagerly posting access and plover updates on the outer beach’s active Facebook group. This author included.

Funny enough, my wife and I bought a Subaru Outback three years ago with our daughter and safety ratings in mind, but we didn’t realize it was good for off-roading until this summer when we were figuring out which local beach would be best to hit amid pandemic-induced reduced capacity. The dealer almost laughed us off the phone when we called to ask if it was okay to take the Outback off-road.

Even more ironically, I grew up part-time in Shirley, and have fond memories of spending summer days at Smith Point as a child, although back then I had no idea about driving on the beach.

It’s good to be back. Now excuse me as I clean the absurd amount of sand out of my car.