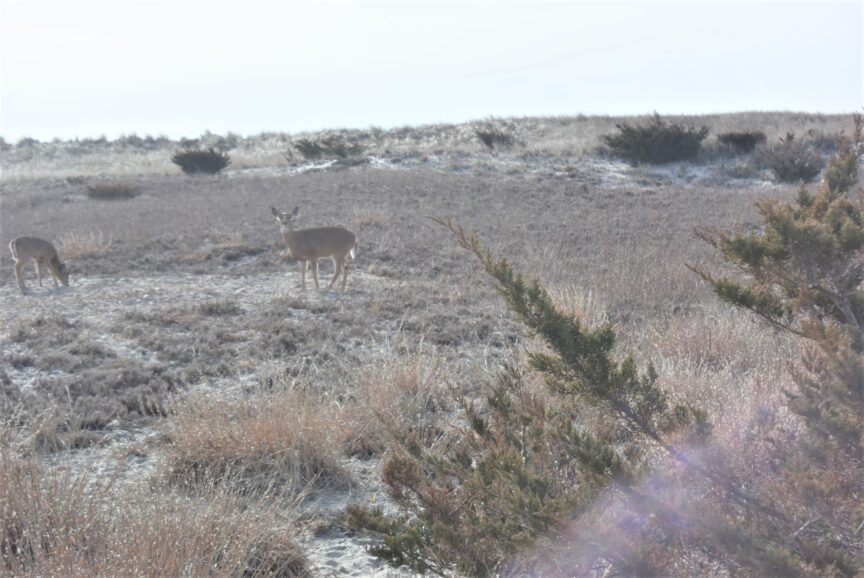 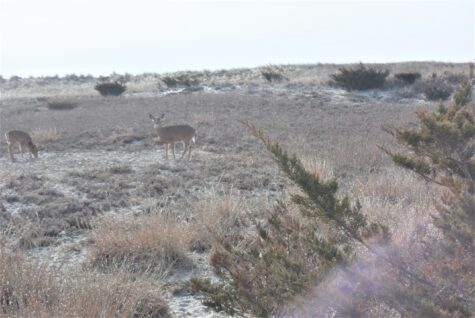 Make-shift bait stations are basically depressions made in the sand where vegetation has been cleared for the purpose. (Photo by Marija Beqaj)

Emboldened by a Second Circuit U.S. Court of Appeals decision in their favor earlier this month, it appears Fire Island National Seashore (FINS) is gearing up to kill more deer within their jurisdiction – this time on Fire Island proper.

According to accounts and observations of multiple Fire Island residents, activity is being witnessed of rangers assembling make-shift bait stations to get white tailed deer accustomed to feeding on tracts of federal land in close proximity to residential communities, including but not limited to Kismet and Point O’Woods.

“FINS is at this moment using corn to lure deer onto areas of federal land that are dangerously close to the communities, the villages and Burma Road, so that unsuspecting deer will gather to eat the corn and be easy prey for sharpshooters to kill…” reads a portion of an email composed by Marija Beqaj of Fire Island Wildlife Foundation, dated February 19. “Regardless of the public safety measures that FINS takes, shooting with such weapons on a narrow barrier island that has a single, mainly dirt road running down its length, presents a risk to year-round residents and their children, and to winter visitors.”

The areas she describes are basically depressions made in the sand, often near the secondary dune line in which patches of vegetation has been cleared for the purpose. Corn is left in these cleared circles by park rangers. Ms. Beqaj asserts that the areas are chosen to attract deer away from the residential communities which armed sharpshooters are prohibited from entering.

Other Fire Island residents have made similar observations.

“I saw a ranger pouring a bag corn on the ground,” said Ocean Beach real estate broker Dana Wallace, III. “I asked her what she was doing, and she said it was for ‘science.’ I know what kind of science that is, and it leaves a bad taste in my mouth.”

The present FINS Whitetail Deer Management Plan was entered into the Federal Register on December 31, 2015. However it remained an unfunded mandate until January of 2019 when this paper learned of a sharpshooting project slated for William Floyd Estate, which FINS officially announced two weeks later. In February of 2019, Animal Welfare Institute and Wildlife Preserves, Inc., petitioned for a temporary restraining order to block the plan, which they asserted violated a verbal agreement not to commence any deer culling activities until a joint lawsuit the two not for profit organizations filed against the FINS Deer Management Plan in 2017 was settled.

While U.S. Court Eastern District Judge Sandra Feuerstein was considering the matter, the public was blindsided as USDA sharpshooters slaughtered nearly four-dozen deer in five Long Island State parks unannounced over a single weekend, including 21 of them at Robert Moses. Days later Feuerstein ruled to dissolve the restraining order, and culling at the William Floyd Estate in Mastic Beach continued for the next month. Although the kill yielded only a fraction of the haul anticipated, FINS Superintendent Alexcy Romero vowed this activity would continue in 2020 on land tracts under their jurisdiction, including but not limited to Watch Hill and the Otis Pike National Wilderness Area.

While none of this activity is really a surprise to Fire Island residents, many are troubled by the locations where present baiting activity is being witnessed. Locations like the Wilderness Area or William Floyd Estate sprawl over many acres, however federally owned tracts on Fire Island’s west end are often little more than narrow strips – some not more than a handful of meters wide.

A school bus full of children near the Robbins Rest tract were brought into direct contact with armed hunters back in the late 1980s when an “experimental hunt” conducted by FINS in cooperation with the DEC, which remains an incident many longtime Fire Islanders remember vividly to this day.

Last year’s experience with the William Floyd/ Robert Moses State Park cull also infuriated many residents due to a perception of secrecy, which included published notification of planned culling activity being distributed only days in advance, and what little posted signage there was being small and inconspicuous.

There have also been sightings of mysterious individuals in the Point O’Woods area, with quivers of arrows on their backs, which have raised additional questions. These sightings are in close proximity to the Sunken Forest, an area in dispute with the Animal Welfare Institute / Wildlife Preserves, Inc. litigation, which unlike the Friends of Animals lawsuit, is still open and making its way through the federal court system.

Even readers who believe the Fire Island deer herd should be thinned have voiced dissent on our Facebook page about the taxpayer expense of sharpshooting, when the issuance of hunting licenses could bring income to the cash strapped national park. However any ethical hunter will agree that late winter is not the time for such harvest, as many does are pregnant with their offspring this time of year. Still, had FINS stayed the course of the island’s immnocontraception program 20 years ago, this is a discussion we might not be having today.

After a brief volley of missed telephone calls between this publication and FINS Superintendent Alexcy Romero prompted us to send him a written a list of questions earlier this week. Questions asked included what are the baiting stations about, where is any culling scheduled to take place, when would the public be notified, how would the public be kept safe, and is FINS still respecting the decades old covenants of the Sunken Forest?

Seems Mr. Romero answered all of our questions – succinctly. If there is one more question we wish we had asked him, it would be does he feel any remorse for these actions, but we suspect his answer would be no.