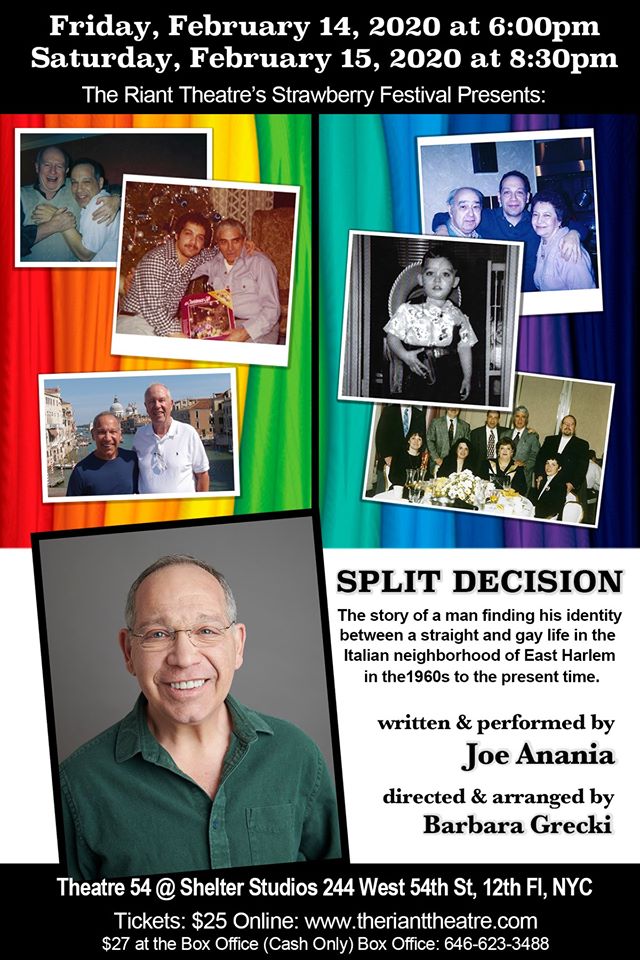 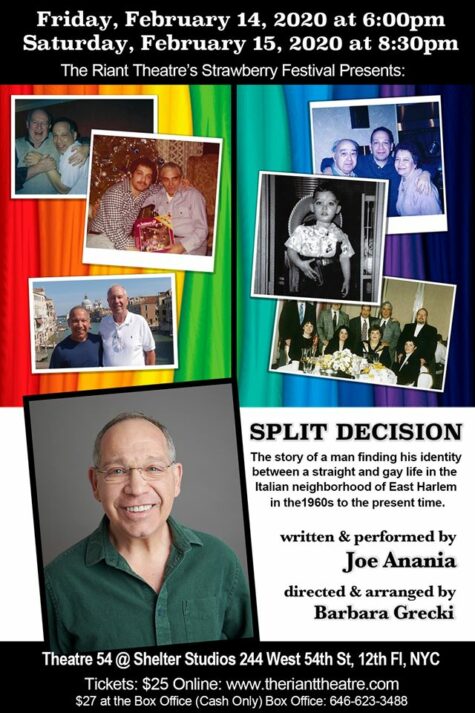 By Leonard Feigenblatt ~ “Split Decision” made its debut in Cherry Grove last summer at the Cherry Grove Community House Theatre.

“The show is heartwarming, honest and funny,” wrote Fire Island News community columnist Robert Levine in the Aug. 30, 2019, edition. “Make a point to see it.”

Thanks to the patronage of the Arts Project of Cherry Grove, many productions by resident talent are possible. Written and performed by Joe Anania and directed and arranged by Barbara Grecki, “Split Decision” was very much born and raised in Cherry Grove.

Now it has elevated to Off Broadway, and was included as part of the Riant Theatre Strawberry One-Act Festival, where on Feb. 14 and 15, it showed at Theatre 54 at Shelter Studios and Theatres in New York City.

The play’s opening begins in a circa 1960s East Harlem Italian neighborhood, with Anania’s personal journey about trying to come out to his Italian American, Catholic family, and balancing his gay life in an unaccepting straight society. It is a theme that is very relatable to gay men and women who grew up in that era who did not have the rights that we have now; a time when being gay in America was still a taboo subject.

Such themes are now visited often in theater and literature, but Anania is very connected to his material, especially in the scenes where he talks to the ghost of his beloved mother. How the play moves swiftly from the 1960s to present day in a single act also is deftly handled, making it an excellent selection for this venue.

It is not a spoiler to say that it all ends well. A Fire Island summer resident, Joe Anania lives a happy life in the Grove with his husband, Roland Michely. The enthusiastic, sold out audience greeted Joe with great warmth and love, and what a Valentine’s Day it was.

ALSO OF INTEREST: The following are a few of the wonderful events that are happening in New York City in the Winter/Spring of 2020.

Town Hall Broadway by the Year: Scott Siegel will be presenting the 20th season of his signature series:

The Green Room 42: Cabaret shows that feature Broadway performers including artist residencies by: