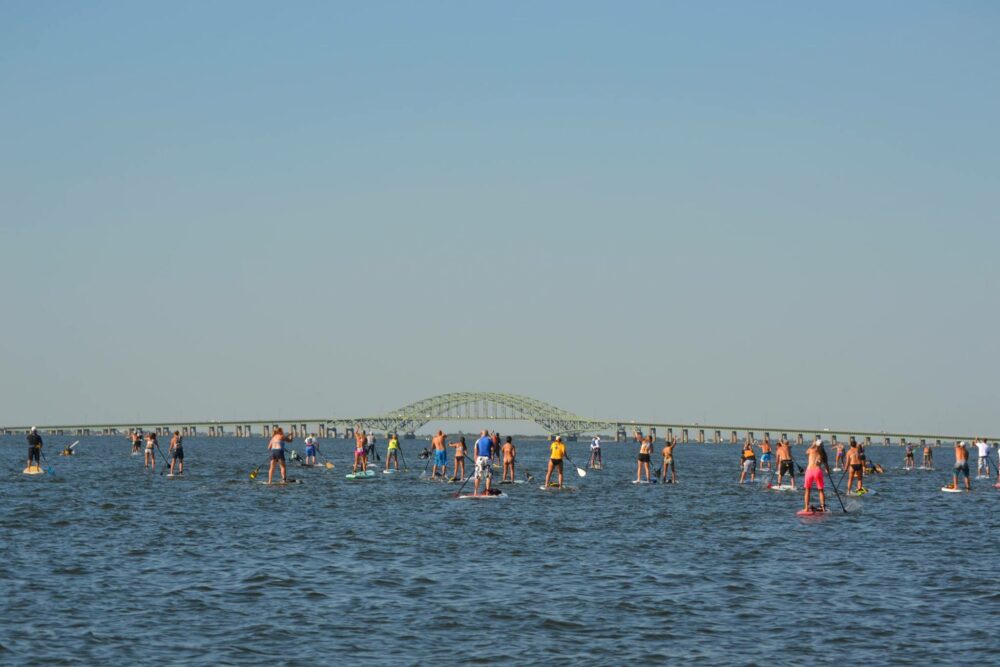 SUPPORTERS OF THE BEAUTIFUL bay that connects Fire Islanders to those on the South Shore of Long Island came out on Saturday, Aug. 27, on stand up paddleboards and kayaks, as volunteers or with open wallets to raise money and awareness for its protection.

“We all love this bay,” he said, and he believes that educating neighbors about the consequences of their “nice green lawn” will go a long way toward its preservation.

“Please, No Pesticides” is the clear message the group is communicating in order to keep the bay safe for swimming, and to revive a once-thriving shellfish industry. With 31 creeks that flow into the Great South Bay, it is not just waterfront residences that need to forego the green lawn. Human health is a huge factor as well, according to the group’s distributed materials, which quoted studies of the correlation of lawn pesticides with asthma, cancer, nervous and immune system damage, reproductive problems, and birth defects.

Supporting moratoriums to minimize runoff, which also threatens the safety of our drinking water supply, the 501c(3) non-for-profit also advocates for 21st century wastewater technology and oyster harvesting to revive the health of the bay.

“There’s no more bay after this,” said Kevin McCaffrey, a political representative who told the crowd, “I grew up on the South Shore as a fisherman, boater and waterskier.” He said he wants his children and grandchildren to have the same opportunities, and that he hopes for changes at the county level, mentioning the Bergen Point sewer plant and replacement of pipes to reduce nitrogen levels in areas without sewers.

Karen Marvin, the race sponsor and owner of Babylon’s South Shore Paddleboards, also gets the connection between humans and the bay’s future, and it is the reason she decided to create the event. “Paddle for a great cause,” she said, wearing a gold board and paddle around her neck and holding a handful of medals in her hand.

Sharing the love of paddleboarding with her two sons, she wants the bay preserved for them, and also wants others to “get on board” with the sport she has fell in love with. Her son Ryan, 11, paddled in the race, as did her son Billy Jr., 16, who said, “It was windy on the way back but I rode a couple of waves.” Just last week, the teen also joined his mother in her quest to paddle 26 miles around Manhattan.

Her shop has been instrumental in getting kids on board, literally, too, with the first race training program dedicated to teaching youth ages 10-17 in the sport. Students learn the fundamentals of paddling, ocean and water safety, as well as environmental issues. Known for putting her all into her shop, the cause, and her fantastic displays, Marvin went all out with hand carved wood trophies, medals, and jewelry to support the cause, as well as flyers with safety tips. She also donated a stand up board to raise money.

Times and winners did not seem as important as the cause, but competitors cheerfully chose from a 6-mile or 3-mile stand up paddle or a kayak race.

This and last year’s winner and veteran Fire Island lifeguard Billy Swezey of Great River, took an astounding lead from the beginning and held onto it straight on through the race.

“There were tough conditions,” said Swezey, referencing boat wake and winds that picked up, but he still enjoyed the test. Extremely fit from his lifeguarding, paddleboarding and kiteboarding, the Atlantique lifeguard went back out to assist his father finish the race.

“It was more than I expected,” said Alan Mayors, the first finishing kayaker who was new to the bay course. Hailing from Hauppauge, he usually kayaks further inland but seemed to enjoy the challenge.

The event was hosted graciously and with volunteers from the100-year-old Bay Shore Yacht Club.

For a full list of SUP at BSYC race results visit: paddleguru.com/races/SUPattheBSYC2016. 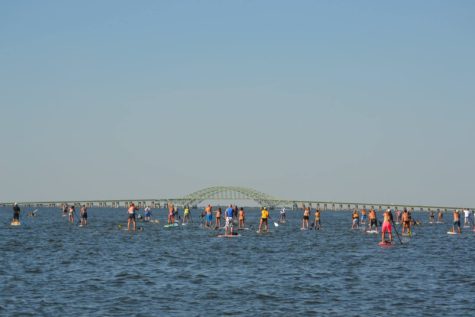 SUP for the greater good.. (Photo by Carrie Ann Salvi)