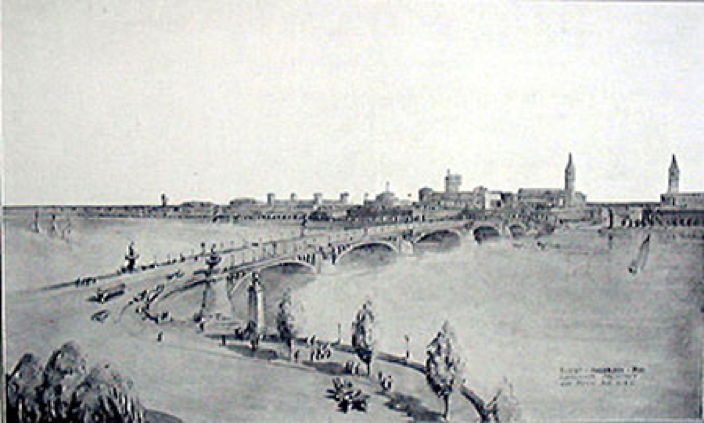 The lesser known of the two bridges is the Smith Point Bridge. It extends William Floyd Parkway south, from the Smith Point peninsula onto a quarter mile long span over the Narrows between Bellport Bay to its west and Moriches Bay to its east. It terminates in Smith Point County Park.

The land on which the Smith Point Bridge is built was originally part of the William “Tangier” Smith holdings of 81,000 acres, including 24 miles of Great South Barrier Beach now known as Fire Island. In 1718, Richard Floyd purchased 4,400 acres from the Tangier Smith family. It included Smith Point peninsula and three miles of oceanfront beach. There was no bridge.

And then along came Quimby, Fredrick J. Quimby to be exact or…hmmm…was it Quinby? Official documents differ as to the spelling of the man’s name (was it with an “m” or an “n”?) no one was ever quite sure – but there were no doubts as to his grandiose plans.

In either 1910 or 11, Quimby/Quinby (let’s just call him “Q”) purchased anywhere from 4,000 to 10,000 acres (depending on which press release you believe) from the descendants of the Smith family. He touted his plans for turning the property he now called Tangier Manor into “The World’s Greatest Development,” aka “The Greatest Development of the Century” and offered plots of land for sale.

As incentives to buyers, “Q” promised to dredge a canal across Rockaway Neck (Far Rockaway) to provide a deepwater channel for passage of the yachts of the rich and famous who were invited to stay at his oceanfront Grand Hotel affixed “with structural features unique to itself.” It was to compete with the Surf Hotel on western Fire Island and with the distant Atlantic City, New Jersey, with its boardwalks and oceanfront hi-rise hotels. But he needed a bridge to get to the beach to complete the dream.

The construction of a “great drawbridge to span the Great South Bay to join the mainland of Tangier to the beach” was his answer. It would be “a lift structure 350 feet long, 72 feet wide and 75 feet above high water. The arches would be high enough to permit the passing of all but the largest vessels. The invisible lift would make the passage of big steamers and sailing vessels possible.”

“Q” hired Michael Gillespie, a recent Irish immigrant, to clear a 215 foot wide “main boulevard” using horse plows. It was to extend four miles from the “Tangier” railway station (LIRR, Montauk line) to the tip of the Tangier peninsula where the bridge was to be built. That road is now present day William Floyd Parkway.

In all, “Q” invested $4.5 million dollars in his ventures, but he needed an infusion of new cash to keep his head above water. So, on Sunday, May 7, 1911, “Q” hired a “Special Train” to transport high rollers from Penn Station to the Tangier station, located between Brookhaven and Mastic. Cars picked up the guests and drove them to the Inn-in-the-Pines where a sumptuous dinner was served. After dinner the automobiles transported the guests south to the Narrows where they embarked on motor yachts to sail them across the bay to “Tangier beach, a long stretch of magnificent oceanfront.”

Evidently there were not enough takers, and “Q’s” endeavor fell into financial distress. Numerous lawsuits had been filed, some going back as early as 1904. One lawsuit was filed by none other than Michael Gillespie. “Q” had stiffed him out of $426 dollars for his work creating the new road. Newspaper articles about the Tangier property all but disappeared from print, and those that were published mentioned that not much property development was underway.

“Q” tried a $2 million dollar refinance scheme in 1912, but filed for bankruptcy in 1913. He fled to Virginia and was unable to appear in court, his lawyer said, because he was “very ill.” The attorneys on both sides of the lawsuit called each other liars and almost came to blows inside the courthouse. His ex-wife was arrested for threatening to get a gun and shoot him. In 1914, he pawned his wife’s jewelry. She later caught him in bed with another woman. Luckily, this was not the same wife with the gun.

Somehow or other “Q” raised enough money by 1916 to pay off Gillespie and get him to build a “temporary” Tangier Bridge over to the beach. But it wound up as only a wooden footbridge and put the lie to the opulence described by “Q” in his advertisements. It did have an engine driven drawbridge, the “first access,” he bragged, by which the beach could be reached other than by boat.

The bridge did not last long however. Early in 1917, 200 feet in the center of the bridge, including the bascule draw and all its machinery, was destroyed by an ice jam. Subsequent winter storms continued to ravage the remains of the bridge.

In 1924, a Patchogue fisherman tied his boat up to the bridge. A drunken watchman standing guard over the area ordered the fisherman to leave. The fisherman refused so the guard grabbed an oar and started after the fisherman who then, in turn, brandished his boat hook. That apparently scared off the watchman – temporarily. He returned with a gun and started shooting, bullets flying everywhere, until an eyewitness subdued the guard and restored peace.

During the mid-1920s, a number of movies were made on the beach and the film industry was instrumental in keeping up repairs on the dilapidated bridge. In 1926, caravans of camels and horses passed over the bridge for the filming of “The Son of the Sheik” staring Rudolf Valentino and Vilma Banky.

The few subsequent wooden bridges built to varying degrees of stability over the years were all destroyed by winter ice floes. The last bridge was washed away in 1927, and no new bridges were constructed for another 32 years.

There was a Congressional hearing to try and find out what happened to all that money that was lost, but nothing was determined, no one was charged, and “Q” magically disappeared into the dried, yellow pages of history never to be heard from again.

Walter T. Shirley came along some 50 years later and managed to bring some of “Q’s” plans to fruition. Today’s street names in Mastic/Shirley area are those as originally laid out by “Q’s” surveyors and architects, and one of the towns now bears Shirley’s name.

On July 4, 1959, after four years of construction, the present day Smith Point Bridge opened. It is a 1,200 foot long drawbridge built on concrete pilings with a reinforced concrete roadway laid on top of a steel beam superstructure and cost $2.5 million dollars. It has a boat clearance of only 22 feet with a cranky old drawbridge that takes forever to open and close, delaying traffic in both directions.

Today, 60 years later, the old bridge needs to be retired and a replacement bridge erected. On Tuesday, June 11, 2019, The Suffolk County Legislature approved $73 million in funding for a new bridge with the federal government picking up most of the cost.

Construction is scheduled to begin in 2021, and should take two years to complete. It will be 55 feet above the high water mark, providing enough clearance for most boats to pass beneath. The new bridge is expected to have a 75- to 100-year life span to accommodate the million visitors who come to Smith Point Park each year.

Let’s hope that the ghosts haunting the Tangier Bridge have all fled along with “Q” and the new bridge serves us safely and efficiently as promised.

Thanks to Ken Spooner and his amazing website Spoonercentral.com for much of the information contained in this article. Check it out. You will not be disappointed. It is filled with a wealth of information about Mastic/ Shirley history.