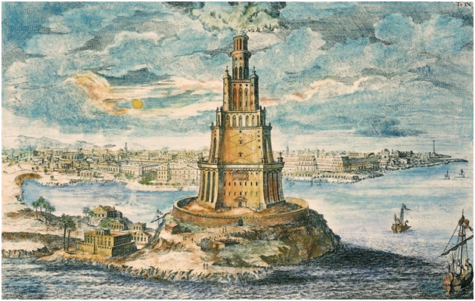 From Pharos to Fire Island 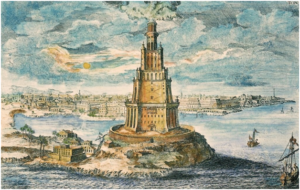 Pharos Light House, one of the Wonders of the
Ancient World. (Painting by Fischer von Erlach, 1721)

On Aug. 7, we will celebrate National Lighthouse Day, and countdown to the 30th anniversary in which Congress passed this resolution. It was on Aug. 7, 1789, that the Bureau of Lighthouses was founded. When President Ronald Reagan signed the bill 200 years later, he did so in recognition of the incalculable lives and resources saved by the active presence of lighthouses.

Lighthouses have been part of human history from the Pharos Lighthouse in Alexandria, Egypt, to our own Fire Island Lighthouse. These first lights were used as navigational aids and were initially nothing more than bonfires set on the beach to warn sailors of dangerous shoals or to mark channels of safe passage. One theory (of many) is that the very name of Fire Island is derived from those fires, whether they were the Native American fires lit to render whale blubber, navigational aids or wreckers’ ruses.

False fires were misused by land pirates (wreckers) intent on purposely luring ships aground in order to murder the crews and plunder the ships’ holds. The most infamous of these wreckers was a man named Jeremiah Smith, said to be Fire Island’s first permanent resident. In the late 18th century he built a driftwood shack somewhere between Cherry Grove and Point O’ Woods from which he carried out his dastardly deeds. After a successful looting he would transport his pillage, hidden under several layers of quahogs, to the mainland in his boat for sale to all too willing buyers.

Perhaps the most famous lighthouse of all time was the Pharos Light, built in 285 BC on an island at the entrance to the harbor at Alexandria. It was one of the Seven Wonders of the Ancient World, rising to over 440 feet tall and stood for 1,500 years until it was toppled by an earthquake.

America’s first official lighthouse was the Boston Light built on Little Brewster Island in Boston Harbor in 1716, paid for by taxing all international vessels using the harbor. Today it is a designated National Historic Landmark and, reputably, haunted by the ghost of an old sailor with a heavy dislike for rock and roll music.

While the Montauk Point Lighthouse was the first Long Island lighthouse and the first federally funded, the Fire Island Light, constructed in 1826, was the second. It was 74 feet tall with the focal plane of its lantern only 89 feet above sea level so its light could be seen no more than 10 to 14 nautical miles out to sea. As limited as its visibility was, it was still the single most important light for transatlantic shipping as it was the first light seen when arriving and the last when departing. The station cost $9,999.65 to build (about $225,000 in today’s money) and came in 35 cents under budget.

In July of 1850, the barque “Elizabeth” ran aground off Point O’ Woods. On board was the feminist writer Margaret Fuller. She, her Italian revolutionary husband, their baby, and five others perished. The resulting uproar, spurred on by Fuller’s high-powered friends (Horace Greeley, Henry Thoreau, and Ralph Waldo Emerson) resulted in Congress allocating enough funds for building a taller, more effective lighthouse.

Our present lighthouse was built following John Smeaton’s prototypic Eddystone Rocks design, a circular structure, wide at its base, tapering toward its top. The interior is a constant 10.5 feet, but the walls vary in thickness from 11 feet at the base to 2.5 feet at its top. An oak tree was his inspiration. It was built of red brick, painted a creamy-yellow color and was completed in 1858. The tower was repainted with its present-day black and white bands in 1891. With a focal plane of 168 feet above sea level its visibility is now 21 to 24 nautical miles. It was originally equipped with a stateof- the-art, first order (largest available) Fresnel lens using a whale oil lamp that rotated, emitting a 5-second flash once every minute.

Back then there were no roads or bridges to Fire Island (the Robert Moses Causeway was not completed until 1964) so perhaps it was the isolation of the island that generated some odd behavior on the part of the lightkeepers. One Felix Dominy openly welcomed visitors, providing accommodations at the lighthouse, affording him and his wife company, relieving their boredom. Regulations allowed lightkeepers to serve “spuretts and things accordeen,” so they became innkeepers of sorts serving liquor and victuals to their guests.

Keeper Hans Andersen was so lonely he advertised for a wife, describing himself as “a stoutly built man of 38 with a jolly face and mustache.” Andersen selected a wife from the 250 or so respondents and fathered two children with her. Love conquers all.

Another keeper, Seth Hubbard, became a wrecker. He was caught with property stolen from the passenger liner “Oregon,” which included 289 yards of fine lace, 12 black silk shawls, 56 neckties, 52 handkerchiefs, and a quantity of silverware deemed enough to “stock a Broadway store” when his trove was discovered. Evidently he was so busy with his side ventures that even the light would go out. He and his son-in-law were fired.

In the 18th century kerosene replaced whale oil as the primary fuel. Early in the 20th century the original Fresnel lens was replaced with one much lighter, allowing the light frequency to increase to a flash every 7.5 seconds instead of every minute. It was later replaced with a Crouse-Hinds beacon. When the Coast Guard assumed responsibility for the Light, a cable was laid across the Great South Bay providing electricity.

The FILPS also built a museum to house the original 9,000 pound, 16-foot tall Fresnel lens in a structure that replicates its old steam power generating building. A United States Lifesaving Service exhibit is in a nearby boathouse. The Crouse-Hinds beacon can be seen at the lighthouse visitor’s center museum, the original lightkeepers quarters.

Come visit. Climb to the top of the lighthouse to see how far you can see. There are 192 steps (158 are spiral, plus nine up to the Light Room). Given the curvature of the Earth and the refraction of our atmosphere, you should be able to see maybe 20 or so miles. Given the curve of history, if you concentrate hard enough, you may be able to spot the fires of Native Americans rendering whale blubber or the fires of those vile wreckers – either of which (or both) may have given the island its name.

More than 100,000 guests visit the lighthouse and its complements each year. The fees provide for its maintenance and operational expenses. Adult tickets cost $8, seniors and children 12 years and under are $4. Please allow at least two hours for your visit, it’s that interesting. Call 631-661-4876 for more information.