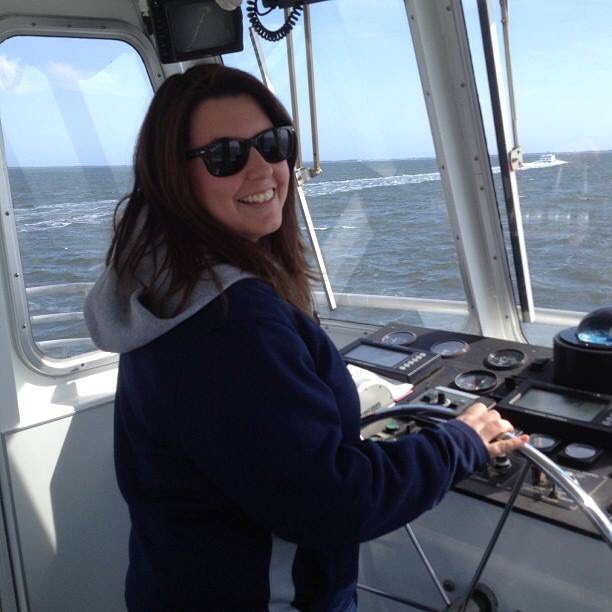 When Colleen Johnsen was hired as a deckhand at Sayville Ferry Service at the age of 16, she didn’t immediately set herself the goal of becoming a licensed ferry captain. She certainly enjoyed being and working on the boats and even began to accumulate training time behind the wheel, but it wasn’t until a fellow crew member suggested that she work towards getting her license because she was “already behind the wheel so much” that she began to seriously consider becoming a captain.

Regina Siepmann, a captain at Davis Park Ferries, had a similar experience. She is a third generation captain at the company but said initially she wasn’t looking to get her license. “It was ingrained that I was going to work there [Davis Park Ferries] but I never saw myself getting my captain’s license,” Siepmann said.

In contrast, Morgan Mooney, a captain at Fire Island Ferries, always knew she wanted to work on boats and become a captain, even before she reached the Coast Guard minimum deckhand age requirement of 16. “I’m third generation here [at Fire Island Ferries] but I’ve always loved the boats so I wanted to work here when I was 12 and had to wait the four years,” Mooney said.

Today, Johnsen is an English teacher in the Bayport-Blue Point school district and works as a captain at the Sayville Ferries during her ‘off’ months in the summer. She said becoming a captain “changed her life” in terms of the doors it opened. In every job interview she has had she has been asked about her license and loves that it demonstrates a sense of responsibility and an ability to step out of the norm. For Johnsen, being a female captain does mean that she has to work around some things, mainly her size. At 5 feet 4 inches tall, she must stand on a wooden box in the wheelhouse whenever she is running the “South Bay Clipper” so that she is able to see the bow of the boat. She also acknowledged that she had to step outside the norm and put herself in a position of respect to be a captain.

Mike Jayne, the current crew manager at Sayville Ferry Service, agreed that to be a captain, regardless of gender, requires a shift in persona on the captain’s part. “You’re moving away from your friends who are still deckhands and having to take on more responsibility,” Jayne said. Mooney noted that as a captain “like everything, you demand and give off a vibe” that helps one work with their crew regardless of gender.

Since becoming a captain, Johnsen has helped train other captains, including a few women, but is currently the only female on Sayville Ferry’s captain’s list. While she doesn’t know if it’s because of gender or simply character, she has found that the female captains she trained were more receptive to her corrections and willing to learn rather than other trainees who occasionally brushed her off. For Siepmann, it has been rewarding to train future female captains, and is especially proud about convincing a female deckhand who was unsure about the decision to start the process.

When asked about their favorite aspects of the job, Mooney, Johnsen and Siepmann give similar answers. For Johnsen, it’s the people, whether that be her fellow crew or customers she takes back and forth. She mentioned that she has somewhat of a fan base within the regular customers who love that she is the only female face they see operating the boats. Siepmann also concurred that some people “are so genuine and happy” about seeing a female run the boat that it can be really empowering. All three captains said that being able to be out on the water and work on boats all day makes the job rewarding. Moving forward, Johnsen said she intends to keep working for Sayville Ferry Service as long as she is physically able. Last summer, she worked while pregnant with twins, so in her mind, if she can do that she can do anything.