The coffee is brewing in the kitchen as the sun is peaking over the horizon. You’re up with the sun, refreshed from a good night sleep lulled by the sound of crashing waves on the ocean shore. It’s a beautiful summer morning and great for a sunrise stroll on the beach. With a baseball cap on, you start your barefoot adventure along the shore.

This is one of many daily activities that Fire Islanders love to partake in each morning. If you get up early enough, before the first beachgoers, there will be only a handful of people strolling down the oceans edge. Walking barefoot toes sinking into damp sand and eyes squinting at the sun rising over the horizon. As you pull your baseball cap lower to block some of the sun’s rays, you notice some debris on the shoreline. You keep walking as if you never saw it, about 10 feet later you see more. This time you start to ponder on how that piece of plastic got there? What kind of person would blatantly throw plastic into the beautiful ocean, did they know it would end up on the shoreline and interrupt your serene morning stroll? 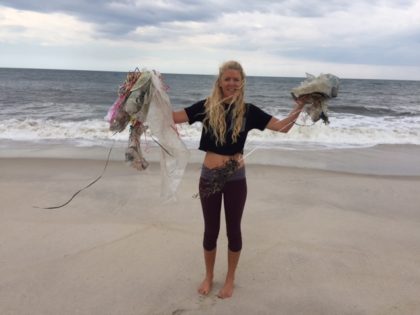 About every 10 to 20 feet you will find some type of garbage lying on the sand. Most of the time it is faded pieces of plastic that have washed ashore, but surprisingly the majority of the debris is washed-up, deflated balloons. The sad part is that these balloons are not from beachgoers’ beach waste. These balloons are from people on the mainland letting go of helium filled celebration balloons thinking they will drift into oblivion. As a Fire Islander, it is obvious that this beach and others like it are balloon oblivion. The only good thing about the balloons making it to shore is that no sea creatures mistook them for food.

Suffolk Police Marine Bureau Erik Johnson is aware of the debris that is left on the seashore. As he drives down the beach for his daily patrol from Democratic Point to Point of Woods he stops along the way to pick up some of the garbage. He collects it throughout the day storing it in his trunk until he has access to a proper recycling or garbage waste bin.

“The most polluted part of the island is down by Sore Thumb where the cars drive on. For some reason the drivers think they can leave their garbage all over the beach,” stated Officer Johnson.

He also finds that a lot of garbage on the beach does not necessarily come from the beachgoers, much of the debris washes a shore from the mainland.

Here at Atlantique we are lucky enough to have park attendants who each day keep our beaches clean, docks free of debris, and garbage pails emptied. If the garbage is not picked up in time it could drift back into the sea and harm the innocent sea creatures. This is why it is so important for Fire Island beachgoers to take Officer Johnson’s lead and be mindful of our own trash, on and off the island.

During your next morning stroll, think of what is really washing ashore. Pick up those plastic balloons and dispose of them properly – and think twice before releasing those celebration balloons. Be conscious of what we do, because every effort counts, and no one likes a dirty ocean!

Email Kirsten at altnaitique@fireisland-news.com with your Atlantique news and story suggestions.