THE COOL OCEAN BREEZE blows the smell of crispy burgers on the barbecue in your face, as you glance at the setting sun behind the fly bridge boats with their American flags swaying in the wind. There is music playing underneath the chitter chatter of your freshly tanned friends that surround you. The day is warm, sunny and spent not only in a bathing suit but wearing everything in your closet that has the color red, white or blue on it. The day only comes around once a year and is catches a close tie with Christmas morning. This day is the Fourth of July, Independence Day, truly the highlight of all Fire Island summers, especially when they are spent at Atlantique.

The fourth day of the seventh month of our calendar, the day when it is socially acceptable to wear as much red, white and blue as possible, set off as many fireworks that you can get your hands on, and maybe even have a cold beer before happy hour just for the sake of celebration. As Americans we love to celebrate our freedom every day but this one day of summer is extra special, especially when spent on Fire Island.

Let’s rewind a second and take a deeper look on how the Fourth of July started and has led us Fire Islanders to grow such a love for this annual holiday. July 4 has been a federal holiday in the United States since 1941. The tradition of Independence Day celebrations goes back to the 18th century and the American Revolution. The original 13 colonies fought in the Revolutionary War hoping to declare their independence from Great Britain. This came true on July 2, when the Continental Congress voted in favor of independence and two days later adopted the Declaration of Independence. That’s when the Fourth of July first was put into the United States history books. Now the Fourth of July is a monumental holiday.

With this original celebration tradition set by the founding fathers, it is only out of respect that we should carry on this tradition and continue to make our own. This is exactly what the Atlantique community has done. There begins a 12-day preparation; the Atlantique boating community wants to get there in time to secure their favorite slip in the marina. In order for this to happen they need to pull in 10 to 12 days in advance due to the high demand of slips during the season. This is especially important for the big boat owners who need “A slips,” AKA the largest slips in the marina that boats 40 feet and up usually occupy during the season. Because of the significantly fewer slips available for these bigger sized boats there is high demand. Arriving in advance will help those who want a perfect spot for July 4 by decreasing stress levels and allowing for a more enjoyable Fourth of July week.

Not only does the community show their country’s pride by wearing red, white and blue, Fire Island-goers also decorate their summer homes, or in the case of Atlantique, boat homes. There are American flags waving off the stern of the boats, patriotic lantern lights trimming the outline of the fly bridges and USA throw rugs set up on the dock. The once plain and grey picnic tables are now covered in American flag tablecloths filled with red and blue solo cups holding everyone’s choice of celebratory drink. With all of these decorations there is no way anyone can miss the American pride the Atlantique community holds as you stroll down the docks at of the marina.

The Fire (Island) Work Show. Though fireworks are not allowed over at the beach, that doesn’t mean you do not get to watch a sky filled with fireworks; in fact, you may even have a better view of a fireworks show. Atlantique offers slots overlooking some of the best firework shows on Long Island. Right across the Great South Bay the sky is filled with colorful explosions in every direction that you look and all you have to do is sit on the bow of your boat to get this amazing experience.

After the American flag dishes are cleaned up, leftovers are put in the fridge, the sun is set and the sky slowly fades to black, the show begins. In the comfort of your own boat’s flying bridge, beach chair on the dock, or maybe even the bay beach Lifeguard stand, anyone in the Atlantique community can enjoy a fireworks show, from afar. This is because all you have to do is look out over the bay and watch all the different shows that are taking place on the mainland. Overlooking low-lying Long Island on the Fourth of July you can see about 10 different fireworks displays from afar with little to no loud popping rocket sounds. The only rocket sound you’ll have to hear all night is the blender crushing the ice for your rocket fuel. So make sure to sit back and enjoy the show this Fourth of July. 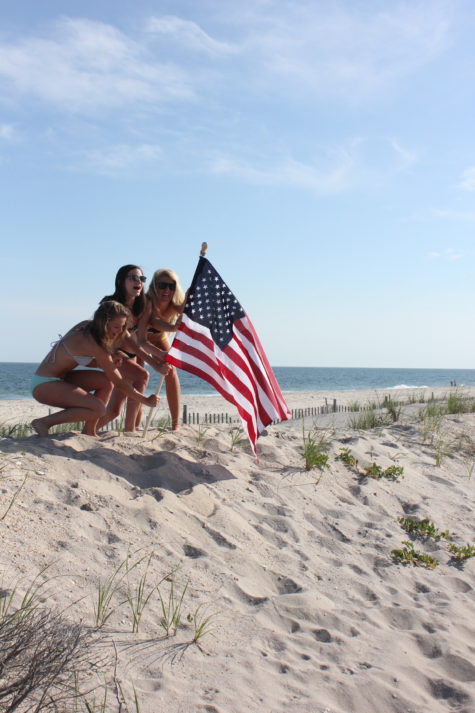