She’s the Master of the Dock

VHF Channel 9 turned up loud with a watchful eye looking out of the foggy window of the dock office. A large boat is pulling into the mouth of the marina as the radio blares:

“SueRay to the Atlantique Dock Master.”

“Atlantique to SueRay, slip A50 is opened and ready for your arrival. 10-4,” responds he dock master.

Grabbing a clipboard with a map of the Atlantique dock slips, the dock master heads out the office door to retrieve the lines from the incoming boat. This is one of the many responsibilities for a dock master at Atlantique Marina on Fire Island. For Carrie Cherveny-Rubino, who is Head Dock Master at the marina, this is one of her many daily activities. From the outside this may seem like a fun occupation, and in many ways it is. However living a day in the life of a dock master is far from easy.

Yes, there are good times to be had for sure, but there are also many serious events can take place on the job at a moment’s notice. From foul weather to engine problems, Carrie has dealt with it all. One of Carrie’s biggest challenges was simply being a female in this profession. When she accepted her first position, she was one of only three female head dock masters along the North East. It never stopped Carrie from achieving her goals. Carrie is in fact a trained and experienced dock master that has dealt with many situations though out her life at a variety of different marinas throughout Long Island.

A dock master’s position is essentially the ambassador of the marina. They are the first person a customer will interact with when pulling into a marina. They are responsible for the safe securing of vessels when they comes ashore, general operation of the marina docks, assisting boaters when in need, and maintaining a safe and clean environment throughout the harbor and marina facilities. 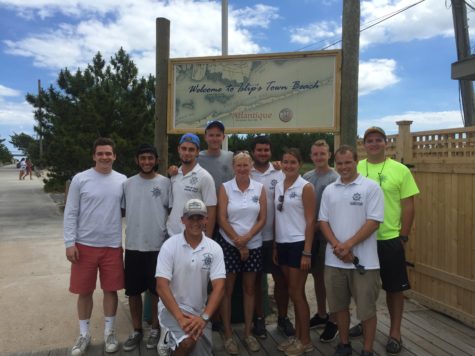 With the marina environment it is easy for things to go wrong, or the weather not to corporate. This is why the dock master’s role is so important. They must know how to properly react in times of need, and know how to handle the boats with confidence. Experience, sense of timing, and keeping a cool head are some of the many qualities that Carrie has to her credit.

Carrie’s childhood was spent near the water in Islip and as an adult she moved to a small beach bungalow on the shores of Fire Island, in the community of Atlantique proper, not far from the marina. At age 15 she gained her first dock master experience at Brewster’s Shipyard in Bay Shore. Here she was a carpenter apprentice, and gained experience handling boats at a very young age. After Brewster, she moved over to Ocean Beach, where she became the Head Dock Master and in charge of the village Marina and Recreation Department. She enjoyed working on Fire Island, and loved the community beaches and friendly people who patronized the marina.

Carrie was eventually recruited on the North Shore, working at the upscale Danford’s Inn Hotel and Marina in Port Jefferson. The owner of Danford’s loved Carrie’s work ethic so much he positioned her as the dock master of Montauk Yacht Club. After eight and a half years of commuting between Port Jefferson and Montauk, Carrie was ready for a change, taking another dock master position at the prestigious Huntington Yacht Club. Carrie believes that being a dock master on the North Shore enhanced her experience, often working with larger craft, due to the depth of the Long Island Sound.

However the South Shore is in Carrie’s blood, and ultimately she returned to her roots. She accepted the position as Head Dock Master of Fire Island’s Atlantique Marina.

She loves the Town of Islip boaters who reside in the marina, her hard working staff, and just being on the water everyday.

Email Kirsten at atlantique@fireisland-news.com with any news and happenings you would like her to include in her next column.